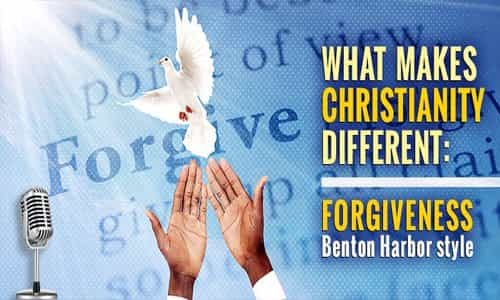 By Eric Metaxas/Breakpoint.org February 13, 2017
Share this article:
Quick, name the practice that most sets Christianity apart from the non-Christian world. Respect for human life? Not really.
Religions such as Jainism have, if anything, an even more uncompromising prohibition against harming any living things.
Sexual morality? Again, there are religions--Orthodox Judaism and Islam immediately come to mind--that place an even higher premium on sexual purity than Christianity.
If you doubt this, ask yourself when was the last time you saw a Christian woman in a burqa.

The answer to this question is forgiveness.
No other belief system has the equivalent of forgiving your brother seventy times seven, i.e., every time--much less commands you to love your enemies, and bless those who persecute you.
The radical nature of Christian forgiveness is so startling, so overwhelming, that it made the CBS Evening News.
Watch here:
The story began in 2005 in the city of Benton Harbor, Michigan. On that day, Jameel McGee was, in his words, "minding his own business," when he was stopped by a policeman, Andrew Collins.
The encounter did not go well for McGee. Collins accused him of selling drugs and arrested him. At the time, McGee insisted that the charges were "all made up."
As CBS noted, "Of course, a lot of accused men make that claim," and the outcome in McGee's case was pretty much the same as in other such cases: He wound up serving four years in prison.
In McGee's words, "I lost everything."
Making matters infinitely worse was that McGee was telling the truth: He was in fact an innocent man.
We know this because the policeman, Collins, was subsequently "caught, and served a year and a half for falsifying many police reports, planting drugs and stealing."
Among the falsified police reports was the one concerning Jameel McGee.
While exoneration is sweet, it doesn't make up for the four years spent behind bars. As McGee told CBS, "My only goal was to seek him when I got home and to hurt him."
He appeared to have gotten his chance when both McGee and Collins ended up working at a café run by Mosaic Christian Community Development Center. As CBS put it, the "bad cop and the wrongfully accused man had no choice but to have it out."
And that brings me back to what I said about Christianity's unique emphasis on forgiveness. Collins told McGee "Honestly, I have no explanation, all I can do is say I'm sorry."
McGee's response, "That was pretty much what I needed to hear."

But McGee did not stop there: He befriended the man who wronged him, so much so that he eventually told Collins that he loved him. As Collins tells the tale, "I just started weeping because he doesn't owe me that. I don't deserve that."
Thankfully, forgiveness, and the healing it brings in its wake, has nothing to do with "deserve."
As McGee, a Christian, understood, we forgive one another because, as Paul told both the Ephesians and the Colossians, God in Christ has forgiven us.
The power of forgiveness transcends personal relationships. Think of the reaction to the Amish forgiving the man who killed ten young girls back in 2007. There was a power at work there that even the most hardened skeptic could not deny.
Today, McGee and Collins share their story with others. At least one person seems to have taken its message to heart.
The CBS reporter ended with the following question: "If these two guys from the coffee shop can set aside their bitter grounds, what's our excuse?"
The answer, especially for the Christian, is "none."
Originally published at Breakpoint.org - reposted with permission.