Trump And The Third Temple 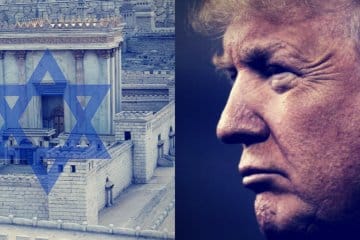 By Enoch Lavendar February 13, 2017
Share this article:
The Jewish Temple Mount movement are excited over the recent election of Donald Trump. They know very well that rebuilding the Jewish temple in today's world would be a dangerous and politically incorrect task.
In their view, if there is any modern political leader with the guts and determination to stand behind such a project, it could be President Trump.
Biblically, many Christians affirm that the Jewish temple will be rebuilt at some point in the End Times.
Could President Trump's strong pro-Israel stand be the game changer which could help lay the groundwork? What role would President Putin play in the mix?
The Cyrus Mandate
A number of Christian leaders have been comparing Trump to the Biblical King Cyrus. They point out that King Cyrus was a leader called and appointed by God.
Despite the fact that this Persian King did not know the God of Israel, God appointed him by name with the mandate to fulfil God's divine purposes concerning the nation of Israel.
President Trump, like King Cyrus, appears an unlikely champion for God's purposes. Despite the controversies swirling around him, Trump has though already taken action to re-align America with important Biblical values (such as pro-life) as well as making an unusually firm stand alongside the nation of Israel.
While several Christian bible teachers have pointed out similarities with Cyrus, few have raised the point that a primary part of Cyrus' divine calling was to order the rebuilding of the Temple in Jerusalem (Isaiah 44:28, Ezra 1:2).
If President Trump really has a similar calling to King Cyrus, could it be that God would use this real estate developer turned President to facilitate the greatest property development of modern time - the rebuilding of the Temple?
A Letter from the Sanhedrin
Key figures in Israel's Temple Mount movement certainly are optimistic that Trump's victory could be the catalyst needed to bring their dream to reality.
Within days of the election victory, long time Temple Mount advocate and now prominent member of the Israeli Knesset Rabbi Yehudah Glick, issued a public call inviting Trump to visit the Temple Mount.
This call was followed days later by an open letter from the re-convened Jewish Sanhedrin. The open letter addressed BOTH Russian President Putin and the new US President Trump - asking them both to fulfill the Cyrus mandate of enabling the rebuilding of the Temple.
Rabbi Hillel Weiss, who serves as spokesman for the Sanhedrin, explained that Donald Trump's rise to power had 'made the eternal Jewish dream a very real possibility'.
Trump's strong stand in support of the Jewish claim to Jerusalem and the West Bank (Biblically known as Judea and Samaria) has led to the Sanhedrin to the belief that he could also support full Israeli rights to the Temple Mount.
Compared to President Trump, Russian President Vladimir Putin might seem like an even more unlikely Cyrus. Many would instead view him as a potential 'Gog' - one of Israel's great End Time enemies.
The Sanhedrin however are basing their letter to Putin on unverified positive reports concerning Putin's attitude to the Temple Mount. Visiting the Western Wall in 2012, Putin allegedly disclosed that he was personally praying for the rebuilding of the Temple.
On this basis, the Sanhedrin decided to write to both Putin and Trump - inviting them both to fulfil the Cyrus mandate.
The optimism of the Sanhedrin is palpable. Rabbi Weiss explains:  "We are poised to rebuild the Temple.
The political conditions today, in which the two most important national leaders in the world support the Jewish right to Jerusalem as their spiritual inheritance, is historically unprecedented".
Cyrus or the Anti-Christ
While the Sanhedrin is looking for a Cyrus type figure to arise to help support the building of the Third Temple, many Christians tend to link the rebuilding of the Temple not with a Cyrus but rather with the anti-Christ himself.
The Scriptures appear clear that the coming anti-Christ will defile the temple, but we shouldn't necessarily equate foreign leaders who facilitate the rebuilding with the coming anti-Christ.
In his day, King Cyrus helped build a temple in Jerusalem at divine instruction, which was later defiled by Antiochus and then frequented by Jesus the Messiah.
Could it be that God will likewise in the End Times raise up a new Cyrus figure that will help facilitate the rebuilding of the temple - which will later be defiled before the Messiah finally returns to take His rightful place in the Temple?
Trump's got the numbers
Jewish leaders have pointed out that the gematria (numerical value) of Donald Trump's name equals that of the phrase 'Meshiach Ben David' (Messiah, Son of David). These same rabbis are quick to point out that they do not believe that Trump is the Messiah (just as well!).

They view the gematria of Trump's name as an indication of him playing a role in the 'redemptive process' - a role in preparing the conditions for the Messiah's arrival. What could prepare the way for the Messiah more than the rebuilding of the Temple?
It is interesting in this context to also consider Michael Snyder's calculations that Trump was born 700 days before Israel became a nation, won the election on Prime Minister Netanyahu's 7th year, 7th month and 7th day in office, and served his first full day in the White House at the age of 70 years, 7 months and 7 days old.
While we should be careful of reading too much into these numbers, it would seem that God Himself has had His hand on the unusual rise of Donald Trump and if so would have a particular purpose for his presidency.
Could these Jewish leaders be right that Trump could have a Cyrus call on his life?
Summary
There is great excitement within the Temple Movement in Israel that the time might be drawing near for the long desired rebuilding of the House of God.
While the Sanhedrin is obviously excited about the rise of Trump and rumours of Putin being supportive, it is still early days, and we have no definite statements from either leader to support these assumptions.
As believers we should none-the-less be watching these developments, praying for God's prophesied purposes to be accomplished, and checking our own spiritual lives to make sure that we are ready to meet the soon coming King.