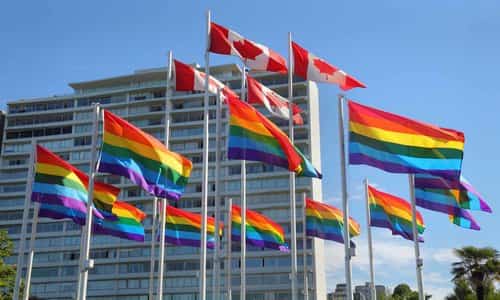 By PNW Staff February 24, 2017
Share this article:
The Canadian government has stepped up its use of the GBA+ course for public employees, a course that pushes both LGBT and feminist ideology.
Although the gender-based analysis plus course (GBA+) and its exit exam were first developed in 1995 under the liberal Jean Chretien government, Trudeau's government has mandated its use and promised unspecified consequences if a government employee fails more than three times.
The course requires participants to question traditional ideas about gender and sexuality and yet it does so in a way that clearly favors the LGBT and feminist views.
The current Canadian government action plan outlines a list of steps that must be taken to complete this indoctrination process by the year 2020. The action plan lists three primary goals:
* To implement mandatory GBA+ training across the entire government system.
* To incorporate the results of GBA+ training in performance reviews.
* "Develop and implement a more robust framework to monitor progress on GBA capacity and implementation across government." This can be taken to mean that the use and results of the GBA+ exams will be monitored and tracked broadly across the government.
What happens if an employee fails the exit exam more than the allotted three times?

No one yet knows and officials have refused to comment to the media on this question. But perhaps more bitter is the irony that liberal politicians are those responsible for implementing a process of ideological re-education that is anything but liberal.
Accept feminism and LGBT indoctrination or suffer the consequences, is the message. But what is actually in the GBA+ course?
One such question gives us a clue when it asks what "Gender is." One must answer either A or B.
A. "The characteristics associated with 'feminine' and 'masculine,' as defined by society, culture and history."
B. "The biological differences between men and women."
If B is selected, the answer is marked wrong.
Government employees must score an 80% on the course completion evaluation exam if they are to pass.
The climate of fear growing around the test is a product of uncertainty as to how the results will be used, what the consequences for failure are and if these results will help to promote only those with feminist and LGBT-leaning ideology while suppressing conservatives in government.
Material on the course indicates that it has some of the following objects:
* Sex is biological while gender is a social construct dependent on context.
* Gender is defined by society, culture and history; gender is subject to change over time, between cultures and is not necessarily dictated by biological sex.
* Gender roles are both learned and socially accepted behaviors that determine the responsibilities, activities, constraints and opportunities for individuals in a society.
* Gender exists on a continuum and every individual shows different degrees of masculinity and femininity.
Thus, radical feminist and LGBT beliefs on the fluidity of gender are taken for absolute truth and no questions are allowed in this march towards progress.
Government employees are required to express their belief in this ideology without question or fail the exam. Gwen Landolt, national vice president of Real Women of Canada, is one critic who has expressed her concern over the campaign for social control.
Landolt stated recently that, according to the GBA+ course, "only radical feminism matters." The hypocrisy is undeniable, she is quick to mention, of using a radical feminist group to create a program on equality that is purported to represent all Canadians.

She has called the forced use of the exam "unacceptable" and is fighting to have the regulation abolished.
If the Canadian government continues to enforce a pro-feminist and pro-LGBT agenda with its tests of ideology, conservatives are at risk of being pushed out of the picture, marginalized from the political process.
In a system that claims to be inclusive, this is both limiting and regressive as it restricts all thought into a narrow channel of radical feminist ideology purported to be absolute fact.
The chilling effect on speaking one's mind and facing official reprimand or simply being passed over for promotion serves as no small deterrent to free thought in this world of liberal Canadian government.
This re-education course, the GBA+, has the stated intention to " Examine the potential unintended impacts of initiatives on diverse groups of women and men".
It is ironic that the exam itself promises, in the long-term, to have such a profound impact on politics through its own enforcement far above a simple, "analytical process used to examine the intersections of sex and gender with other identity factors".
Let's call this like it is: a test of political ideology to enforce a single, rigid viewpoint.