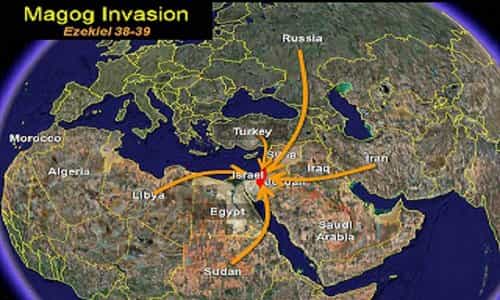 By PNW Staff February 27, 2017
Share this article:
Russia continues to expand its influence in the Middle East and is bringing together more and more countries into its fold.
Intervention in Syria has been the catalyst to re-establishing its power in the region not seen since the cold war days.
Iran has been a long time partner with Russia but now we see new developments in both Libya and Turkey to also bring about a stronger alliance.
Iran saw a massive cash influx after sanctions were removed last year, thanks to the Obama administration, and as a result a substantial portion of this money will be put toward military modernization including an estimated $1 Billion air defense missile system supplied by Russia.
Part of this deal also includes the Russian S-300 air defense missile system, considered one of the most effective anti-aircraft and anti-ballistic missile systems in existence.  A clear response to Israel's threat the Iran will never be allowed to become a nuclear power.

Russia, in a bid to regain its previous influence enjoyed in Libya before the overthrow of the Ghaddafi government, has also reached out to a Libyan general named Khalifa Haftar who controls as many as 60,000 men in the Libyan National Army (LNA) in the east of the country.
Russia recently received General Haftar aboard its aircraft carrier Admiral Kuznetsov, pledging their support for his bid to control Libya, a move that would give Russia significant influence over North Africa.
A former colonel under Ghaddafi stated that "Haftar is going to facilitate Russian access to ports in Libya as well as open up airport runways to them."
In the case of Turkey, President Recep Tayyip Erdogan has thrown himself on the side of Russia as Turkey's relations with both Israel and the United States have soured.
In August of 2016, Erdogan praised Putin as his "dear friend" in a visit to St. Petership that saw the two leaders pledging to strengthen ties.
The 2015 downing of a Russian jet by Turkish forces seems all but forgotten as the two nations continue to strengthen their military ties.
Turkey's half-century old EU membership bid is also currently tottering on the brink of collapse, after the European Union's legislature asked the bloc to freeze membership negotiations with Turkey over the government's heavy-handed crackdown following a failed coup in July.
Turkish president Erdogan indicated in a recent interview that he was fed up with waiting for the European Union to accept Turkey as a member state, indicating that he would be willing to consider joining the Russia-led Shanghai Cooperation Organization (SCO) as an alternative to the Western bloc.
2,600 years ago, the prophet Ezekiel foretold of a time when a coalition of Nations would gather together to invade the nation of Israel. This well-known conflict is known as "The War of Gog and Magog."
According to the book of Ezekiel, chapters 38 and 39, this confederacy of nations will attack Israel during a relatively peaceful period that appears to be generated by a recent conflict resulting in a "state of peace" for the Jewish nation.
According to the prophet, "After many days you shall be called. In the latter years, you shall come into the land that is restored from the sword, whose inhabitants have been gathered out of many peoples, against the mountains of Israel which had been always a waste. But its people were brought out of the nations, and they, all of them, are dwelling safely ... and you shall say, 'I will go up against the land of unwalled villages. I will go against those who are at rest, that dwell safely, all of them dwelling without walls and having neither bars nor gates'" (Ezekiel 38:8, 11).

The nations cited by Ezekiel are each referenced in the Old Testament, yet they all represent nations which exist today.
Long before Russia became a major world power, most Biblical scholars identified Magog as the nation of Russia and Gog as the ruler of Russia.
These other nations mentioned in Ezekiel 38 are:
" Magog (also said by other experts to include Meshech, and Tubal) = Russia
" Persia = Iran
" Cush = Ethiopia/Sudan
" Put = Libya
" Gomer = Turkey (Some have identified as parts of eastern Europe)
" Beth-Togarmah = Turkey (also said by other experts to include Armenia, and the Turkish-speaking people of Asia Minor).
The Bible indicates that in the "latter days" the Lord will put a "hook in the jaw" of these nations listed and according to the prophet, "you shall ascend and come like a storm; you shall be like a cloud to cover the land, you and all your troops, and many peoples with you." (Ezekiel 38:9)
Some speculate that "hook in the jaw" could be Israel's newly discovered oil and natural gas riches which directly affect the Russian economy.
Other analysts believe Russia's alliance with Iran could be a "hook' if Israel pre-emptively attacks Iran's nuclear program, resulting in retaliation by Iran and the ensuing continued draws in Russia.
For now we see the alliance of nations forming exactly as Ezekiel described.  Now we await the "hook".