Is Something Strange Happening Inside The Earth? 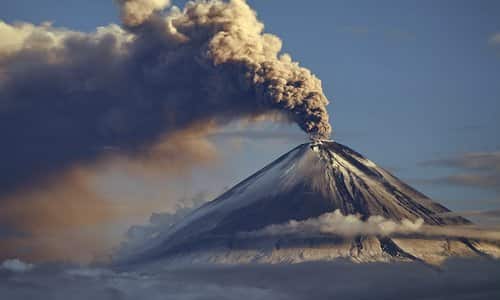 By Michael Snyder/Economic Collapse Blog March 02, 2017
Share this article:
Why are "giant fountains of lava" suddenly pouring out of some of the most dangerous volcanoes on the entire planet, and why are so many long dormant volcanoes suddenly roaring back to life?
The spectacular eruption of Mt. Etna in Italy is making headlines all over the world, but it is far from alone.
According to Volcano Discovery, 35 major volcanoes either are erupting right now or have just recently erupted, and dozens of others are stirring.
So what is causing this upsurge in volcanic activity?  Is something strange happening inside the Earth?
According to the USGS, magma is "molten rock underground", and lava is molten rock "that breaks through the Earth's surface".

Right now, something is pushing magma up through the crust of the Earth at a number of key spots around the planet.  On the island of Sicily, the "giant fountains of lava" that are coming out of Mt. Etna can be seen 30 kilometers away...
Giant fountains of lava could be seen sprouting from the volcano, located on the isle of Sicily, as far away as Catania, around 30 kilometres away, and the resort town of Taormina.
The Meteorological Observatory in Nunziata said: "You can clearly see the lava fountains, although currently modest, as it escapes from the crater in the southeast."
An orange air alert has been issued, meaning that airspace will remain open but authorities will continue to monitor the situation.
On the other side of the world, a constant stream of molten rock has been springing out of Guatemala's "Volcano of Fire" since February 25th...
Guatemala's Volcano of Fire erupted Saturday (Feb 25), spewing lava and sending up plumes of ash that rained down on nearby communities and could eventually reach the capital, civil protection authorities said.
The Volcan de Fuego, one of the country's three active volcanoes, is located about 45km southwest of the capital Guatemala City. It was the volcano's second eruption this year.
And in the middle of the Pacific Ocean, a "firehose of lava" has been pouring out of the Kilauea Volcano since December 31st.
Meanwhile, a number of large volcanoes that have been dormant for a very long time all over the world have started springing back to life.
For instance, the only active volcano in India has suddenly started "spewing lava and ash" after being silent for 150 years...
Barren Islands volcano, India's only active volcano, is reportedly spewing lava and ash after a gap of 150 years. It erupted for about four hours in January, scientists from the National Institute of Oceanography (NIO) claimed.
The volcano is situated in Barren Islands in the Andaman & Nicobar archipelago. Some unsubstantiated reports even claim that it is South Asia's only active volcano.
Its first recorded eruption dates back to 1787. Since then, the volcano has erupted more than ten times, including the one this year.

At one time scientists would speak of "dead volcanoes", but now we learning that it really isn't safe to speak of any volcano as being completely "dead".
So many of these long dormant volcanoes are roaring back to life, and why this is suddenly happening now is puzzling many of the experts.
And as you have seen, this isn't isolated to just one or two geographic regions.  It literally is happening all over the globe.
Last month, Indonesia's Mount Sinabung in the southern hemisphere erupted seven times in the space of a single day, and meanwhile authorities in the northern hemisphere were warning us that four of Iceland's biggest volcanoes are preparing to erupt.
Indonesia and Iceland are about as far apart as you can get, and yet they are both being affected by this worldwide phenomenon.
Without a doubt, something definitely appears to be causing a significant increase in worldwide seismic activity.
Let's talk about earthquakes for a moment.  A website known as the Big Wobble recently published an article that included two extraordinary maps.
The first map showed the number of major earthquakes from January 1900 to January 1917, and the second map showed the number of major earthquakes from January 2000 to January 2017.
The difference between the two maps was startling to say the least. 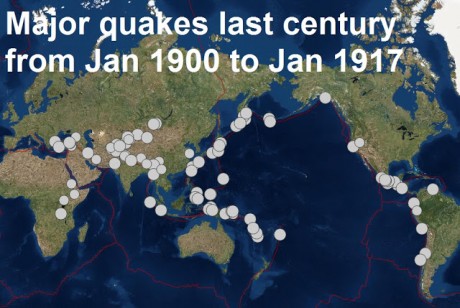 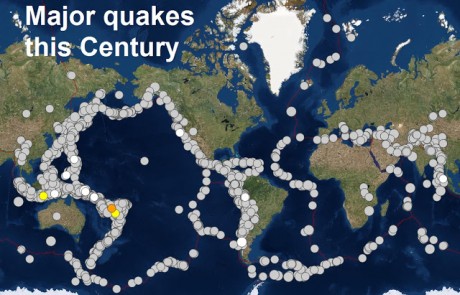 It is becoming extremely difficult to deny that something is happening to the crust of our planet, and many are becoming concerned about what we could soon experience if the level of seismic activity continues to rise.
We already talked about Mt. Etna, but a much greater threat in Italy appears to be awakening under the city of Naples.  A massive supervolcano known as "Campi Flegrei" is close to a "critical state", and if it erupts the consequences will be beyond catastrophic.  The following comes from National Geographic...
A long-quiet yet huge supervolcano that lies under 500,000 people in Italy may be waking up and approaching a "critical state," scientists report this week in the journal Nature Communications.
Based on physical measurements and computer modeling, "we propose that magma could be approaching the CDP [critical degassing pressure] at Campi Flegrei, a volcano in the metropolitan area of Naples, one of the most densely inhabited areas in the world, and where accelerating deformation and heating are currently being observed," wrote the scientists--who are led by Giovanni Chiodini of the Italian National Institute of Geophysics in Rome.
If that supervolcano were to fully erupt, millions could die, the skies in the northern hemisphere would be darkened for months and the resulting "volcanic winter" would cause famines all around the globe.
And the same things could be said about the supervolcano that is awakening in North Korea too.
In the United States, we should be watching the volcanoes on the west coast for signs of trouble, and my regular readers know that I am particularly concerned about Mt. Rainier.
Someday Mt. Rainier will erupt, and the horror that this will mean for the Northwest is beyond anything that I could put into words for you right now.
We live at a time when our planet is becoming increasingly unstable, and a major natural disaster could change all of our lives in a single moment.
Just because our lives have been somewhat "normal" for an extended period of time does not mean that they will always be this way, and those that are ignoring the rumblings of our planet do so at their own peril.