Jews, Christians and Another Jihadi Pogrom In Egypt 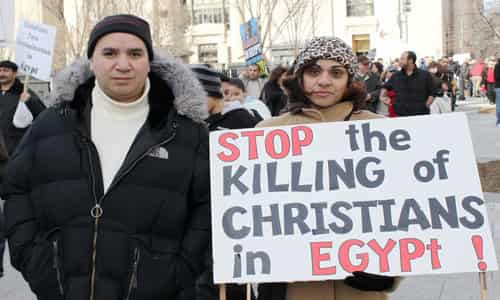 By Lela Gilbert/Algemeiner.com March 07, 2017
Share this article:
From the lips of a little child - an 8-year-old girl from El Arish, Egypt - comes a heartbreaking message. Her words speak volumes about the violent attacks on Christians that are taking place today in Egypt's Sinai Peninsula.
"I am very sad," she explained in words too worldly wise for her years, "because I had to leave my friends and my school, and I don't know if I will go back or not.
I saw the threats with my own eyes, on notices and written on the walls of [my] house. I heard what they said to my father on the phone, when they said we had to leave or else they would kill us."
This young girl, along with hundreds of other Christians, was forced to flee for her life because the Islamic State continues to make bloodthirsty threats against Christians: "We swear that we will repay you, oh Egypt's Christians. We will expel you, slaughter you, and subject you to Allah's laws, oh idolaters - oh unclean ones."
And to make sure no one doubts that declaration, ISIS has killed at least seven El Arish Christians in recent days. The believers were shot, burned alive or beheaded. And their bodies were left, like so much rubbish, by the side of the road.
Any Jewish or Christian child who has attended Sunday school or Bible classes has probably heard the wonderful story of the Exodus, and how God miraculously delivered his suffering people from the brutality of Pharaoh.

Meanwhile, Israel also watches and wonders. The Jewish state is said to be quietly cooperating with Egypt in its war against ISIS terrorists in the Sinai. And, as writer Micah Halpern pointed out in The Jerusalem Post, despite the fact that the Western media barely acknowledges the plight of Christians in the Middle East, there is good reason for Israel to pay close attention.
The massacres of Christians in the Middle East have barely made a blip on the radar of the Western news media.
Sisi is reacting much the way Western media is reacting. The Copts are not a part of the mainstream; they don't belong. Their tradition, their practice, looks nothing like Western Christianity.
There are no significant populations and affiliations outside of Egypt to take up the battle cry and defend them. Libya and Sudan have small Coptic communities, but they're not going to make waves and risk their relative safety to help out in Egypt.
Western Catholic and Protestant groups are not connected to these Christians who are part of the Eastern Church, sometimes referred to as the National Churches.
That leaves Israel and Jews around the world.
Defense of Egypt's Christian community is not purely selfless. We have, as they say, skin in the game. We must call attention to the plight of the Christians under ISIS and other oppressors in order to make certain that moderate regimes in the region remain stable.
The deadly "Saturday people, Sunday people" threat continues to menace the Middle East, Europe and beyond. It is being acted out wherever jihadis are given a free hand to impose their seventh-century violence on 21st-century Jews and Christians.
Bloodthirsty Islamist attacks impose indescribable grief and loss on those who manage to survive. Just ask the Iraqi and Syrian Christian survivors of the ISIS genocide.
They are caught between their utterly devastated and unsafe ancient homelands, and a world that turns a blind eye and cold shoulder to their suffering.
Will Egypt's Christians be next?
Originally published at The Algemeiner - reposted with permission.