The Return Of Ahmadinejad Could Trigger Deeper Middle East Conflict 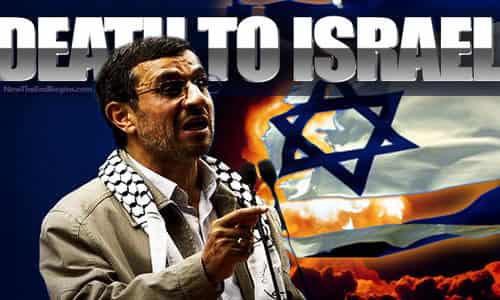 By PNW Staff April 13, 2017
Share this article:
Former Iranian President Mahmoud Ahmadinejad is looking to regain power in the May 2017 election and should he win, bring the Muslim nation into even further extremism.
Ahmadinejad's firebrand style could prove appealing for hard-liners seeking a tough-talking candidate who can stand up to U.S. President Donald Trump.
Ahmadinejad, the sixth president of Iran, held the post for two terms from 2005 to 2013 before constitutional limits forced him out. The hardliner repeatedly thumbed his nose at western countries regarding Iran's nuclear program.

During that time, he became a controversial figure on the world stage and was well known for bombastic and hate-laden speeches on the United Nations floor.
His final U.N. speech called for wiping Israel from the face of the Earth. As Joel C. Rosenberg of the Joshua Fund reported, "He aspires to be a mass murderer beyond the scale of Adolf Hitler".
During his final days in office, Ahmadinejad vowed to return with the "Hidden Imam," who according to Shi'ite belief will reappear to take control of humanity before Judgment Day.
Undoubtedly, should Ahmadinejad seize power more confrontation and a renewed aggressive nuclear program would resume in the already unstable region.
But even more disturbing, if Ahmadinejad truly believes his End of Days rhetoric that his return to power marks the coming of the Twelfth Imam, then Israel has far more to fear than the idle rants of a conservative lunatic.
Israeli Prime Minister Benjamin Netanyahu and his top military advisers have made clear they consider an Iranian nuclear program under Ahmadinejad to be one of the greatest threats they face.
If Ahmadinejad regains power, most analysts believe it will only be a matter of time before Israel feels it has no choice but to strike first.
It has vowed it will never allow Iran to achieve nuclear weapons under a man who has promised to "wipe them out".

A comparison of his language shows a dark mirroring to speeches made by the genocidal maniac Hitler, who openly called for the subjugation of "mongrel races" and the extermination of Jews.
Ahmadinejad, on a world stage, called for the elimination of the "hegemonic" powers of the United States and Israel, whom he described as "the uncivilized Zionists."
Despite the fact that most U.N. representatives walked out during Ahmadinejad's pontifications, Israel's Ambassador Ron Prosor was quoted in by Reuters saying his remarks, nonetheless, should be taken as gravely serious.
"Ahmadinejad showed again that he not only threatens the future of the Jewish people, he seeks to erase our past," Prosor said in a statement. "Three thousand years of Jewish history illustrate the clear danger of ignoring fanatics like Iran's president, especially as he inches closer to acquiring nuclear weapons."
Re-electing Ahmadinejad would serve to validate his End of Days convictions and empower a radical extremist with nuclear capabilities.