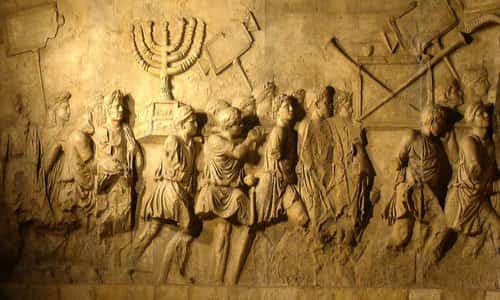 By PNW Staff May 24, 2017
Share this article:
"Then Shlomo assembled the elders of Yisrael, and all the heads of the tribes, the princes of the fathers' houses of Bnei Yisrael unto King Shlomo in Yerushalayim to bring up the Ark of the Covenant of Hashem out of the City of David, which is Zion." (I Kings 8:1)
With the United Nation's cultural body (UNESCO) once again passing a series of anti-Israel resolutions that deny the country's biblical and historical claims to Jerusalem, Harry H. Moskoff, investigative archaeologist, author, and Temple Ark expert, believes that one of the strongest ways to support Israel is through searching, and even finding the Ark along with the holy Temple vessels, for whose true location he claims to have a unique theory.
"In my recent book I provide many proofs, all sourced and referenced to prove that the Temple stood more to the southwest of the Dome of the Rock, i.e. closer to the Western Wall of today," explained Moskoff to Prophecy News Watch. "All of these proofs come from a scriptural perspective, specifically from the Torah and other Jewish sources."
Moskoff has spent significant time and resources into searching the location of these artifacts which he believes are urgently needed to be found to not only silence Israel's enemies, but also to speed up the final redemption.

"I'm finding that more and more people from all walks of life are seeking ways to help the plight of Israel in the mainstream media and in the forum of public opinion," he continued. "With Jerusalem celebrating 50 years of its reunification with the miraculous Six-Day War, now is the most appropriate time to recognize the importance of biblical archaeology and support these projects."
The author hypothesizes that finding the sacred Ark and vessels is a catalyst for the coming of the Messiah based on Biblical commentaries. He notes that, although the only one to truly know where the Ark is is Elijah the Prophet, Moskoff has taken upon himself the job of finding a solid starting point to study, provide direction, and even indicate the tunnel entrances to discover the long-awaited items when the time comes.
Perhaps even more importantly, he also holds a unique 100-year old map that belonged to a certain farmer who claims to have fallen into a cave where these ancient holy vessels were hidden in the Jerusalem area - see video below.
"In order to succeed at this mission, we need a combination of satellite imagery, infrared and sonar technologies, LADAR (laser radar), as well as a device called the fluxgate magnetometer, amongst others," explained Moskoff to Prophecy News Watch. "After all, we're looking at going down 3 meters, and in some places at least 10 meters below the surface of King Solomon's Jerusalem Temple."
With UNESCO officially declaring that no part of Jerusalem belongs to the State of Israel and is "Occupied Palestinian Land", Moskoff feels that now is the time to create new legislation stating that whatever is found on top of or beneath the Temple Mount belongs to the Jewish People.
"Biblical archaeology is being hijacked for political purposes. How can discoveries from excavations in East Jerusalem, for example, be taken away from Israel's possession?" he asked. "The Palestinian Arabs try to do this every day. They strive to take away all Jewish connection to the Land."
Moskoff is quite sure that the vessels have been hidden in plain site based on his research spanning over 20 years. At the destruction of the First Temple, the prophets along with King Zedekiah's Royal Court ordered many of the holy vessels to be hidden in a cave before the destruction of the Holy Temple more than 2700 years ago.
He feels that biblical archaeology is becoming more important and exciting as it consistently proves prophecy and strengthens Israel's biblical claim to the Land.
"Archaeology strengthens Israel and raises awareness of Biblical truths and the Jewish claim to Jerusalem through education and inspiration," he said. "In light of UNESCO's efforts to remove these ties to the land and hand them over to the Palestinians, finding Temple vessels strengthens the State of Israel politically as well as biblically.
Now more than ever, the citizens of Israel need to know that the future of Israel is a glorious one, and that's what The ARK Report media project proclaims to the world."
The Remi-Award winning film producer, writer of The ARK Report, investigative archaeologist and managing director of Moskoff-Media (Israel), MMLC, is hopeful that with President Trump in office and the liberal left's "fake" media publicly exposed, God has opened up a unique opportunity to make things happen in a positive direction for the Holy Land, and the time to raise awareness that the Temple items really do still exist is now.

"The time is ripe to lay clear claim to the Land, once and for all through producing, i.e. discovering something genuine and convincing to keep hold on Israel's holy sites," said Moskoff.
"The PA, France, New Zealand, the UN and of course the Arab states and so many in the general population seek to force Israel to divide Jerusalem and withdraw to the 1967 borders, an awful and dangerous move which would leave the Holy Land with indefensible borders and literally no ancient holy sites. The country would lose the Temple Mount, the Western Wall, the Cave of the Patriarchs in Hebron and Rachel's Tomb."
Moskoff's work has been endorsed by US and Israeli politicians alike, including Governor Mike Huckabee, MK Danny Danon, spokespeople from the City of David, recognized archaeologists and Chief Rabbi of Israel, R' David Lau. Alan Baker, an Israeli expert in international law and former ambassador of the State of Israel to Canada notes that biblical archeology presents historic truths in a tangible way.
"History had proven that where God is the most hidden, THERE He is to be found," Moskoff noted. "All He wants is for all of us who call Israel home to appreciate His protection of the Land of Israel.
For Jerusalem at 50, what could be better than exploration at the tunnels and caves I have indicated for the sake of the Ark and the Temple's holy vessels? Once found, we will proudly use them in The Third Temple, thereby connecting all three Jewish Temples together, forever."
To order The ARK Report book/video, please visit here: