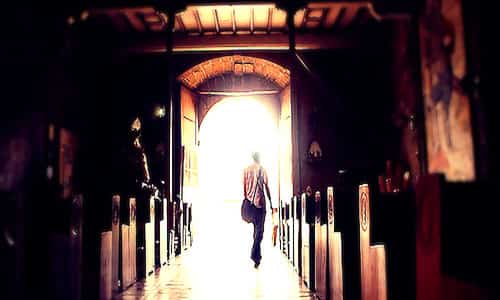 By Tom Olago February 15, 2016
Share this article:
Churches are supposed to be growing, not shrinking, but one major denomination is facing crisis rates of decline. The Presbyterian Church (PCUSA) is expecting to see a loss of over 400,000 members between 2015 and 2020, according to an internal document titled The Layman.

The Layman is the publication for the Presbyterian Lay Committee, a group of theologically conservative Presbyterians whose founding predates the formation of PCUSA.
PCUSA's Office of the General Assembly and Presbyterian Mission Agency Board Executive Committee held a recent meeting where projected losses were discussed.  Michael Gryboski for the Christian Post reported that a slide from the meeting also showed that COGA (Committee on the Office of the General Assembly) predicted membership losses of 100,000 for both 2015 and 2016.Membership losses for 2017-2020 are projected to be 75,000 each year.
"We also assume that the 2016 projection of 100,000 is based on information that the OGA has about churches in the process of seeking to leave the PCUSA. So, those numbers are likely pretty good," said Presbyterian Lay Committee President Carmen Fowler LaBerge.
"The projected membership decline is equivalent to the denomination closing 1,000 churches a year, every year, for five years. That would cut the number of PCUSA churches in the country literally in half," she added.
Over the past several years, PCUSA has suffered a steep decline in the number of affiliated congregations and membership counts. An example of the serious levels of progressive decline: In the year 2000, the denomination had more than 2.5 million members or approximately 1 million more people than in 2014.
In May 2015, Gryboski also reported that the number of congregations belonging to Presbyterian Church (USA) fell below the 10,000 mark during 2014, according to statistics released by the denomination.
PCUSA had earlier reported that it had 9,829 congregations in 2014, which represents a decline from the 10,038 congregations it had in 2013. 110 congregations were listed as dissolved and another 101 were dismissed to other denominations.
What exactly is behind the massive and steady exodus of laity from the Presbyterian Church? The CP states that one self-inflicted contribution to the decline has been the general theological direction of the General Assembly- especially its growing acceptance of homosexuality.
For example, the 2010 General Assembly approved Amendment 10a, which allowed for local bodies, or presbyteries, to ordain non-celibate homosexuals. As a result, in 2012, a group of conservative Presbyterians founded the Evangelical Covenant Order of Presbyterians, which presently boasts more than 200 member congregations.
This is not surprising considering that the pro-homosexuality stance taken by the PCUSA is but the tip of the apostasy iceberg. Indications are that the PCUSA has radically departed from the principles and tenets of faith that undergird most mainstream Christian churches and movements, regressing into what has been described as theological liberalism and full-blown apostasy.

In mid-2014, Joel C. Rosenberg delved into the details of the PCUSAs steady theological and moral decline based on its own statistics and feedback from its clergy:
- The majority PCUSA pastors and members, according to the denominations own data, completely deny the Deity of Jesus Christ.
- As far back as 1970, the PCUSA General Assembly declared that abortions were morally permissible and should not be restricted by law.
- In 2010, the PCUSA released a survey that only 39% of its members agreed or strongly agreed that only followers of Jesus Christ can be saved. The same survey found that only 35% of its pastors agreed or strongly agreed that Jesus Christ is the only way of salvation.
- In 2011, a PCUSA survey found only 50% of its pastors read the Bible on a daily basis, and only 6% believed the Bible should be taken literally. 19% of its pastors do not believe Jesus is coming back to Earth one day, and 30% of its members dont believe that either. The same year, the PCUSA General Assembly voted to approve people in homosexual relationships to be ordained as pastors, elders, and deacons.
- In 2013, the PCUSA rejected the popular hymn, In Christ Alone, from its hymn book because it so deeply disagreed with the lyrics theology.
- In 2014, the PCUSA General Assembly voted to approve of homosexual marriages.
Other Biblically-supported positions have become PCUSA casualties as well. An example is the rejection of Israel; effectively seeking to curse them through divestment, whereas God declared that He would bless those who bless them and curse those who curse them (Genesis 12:3).
To explain, Rosenberg recounted how the PCUSA General Assembly voted to divest from companies that operate in Israel. The top Presbyterian legislative body had reportedly been considering divestment for a decade.
Representatives of the Presbyterian socially responsible investment arm told the national meeting in Detroit that their efforts to lobby three companies for change had failed. Carol Hylkema of the Israel/Palestine Mission Network, a Presbyterian group that advocates for Palestinians and spearheaded the drive for divestment, said their action was modeled on the divestment movement to end apartheid in South Africa.
Rosenberg concluded: What we are seeing inside PCUSA is a fulfillment of Bible prophecy. It is tragic, but at least the Lord warned us ahead of time that things like this would happen. Whats interesting is that the further PCUSA gets from Biblical orthodoxy, the more its members - and whole congregations - are leaving the denomination.
The numbers dont lie, yet the PCUSA leadership remains in deep denial over the sinking of their Titanic, focusing instead on perceived positives.  In a statement released mid-2015, the Reverend Gradye Parsons, Stated Clerk of the General Assembly of the PCUSA said that numbers were but one indicator of vitality.
"Membership statistics and church numbers tell one story, but it's not the entire message of how the PCUSA is impacting the world," said the Rev. Parsons.