The Christian Exodus From The Middle East 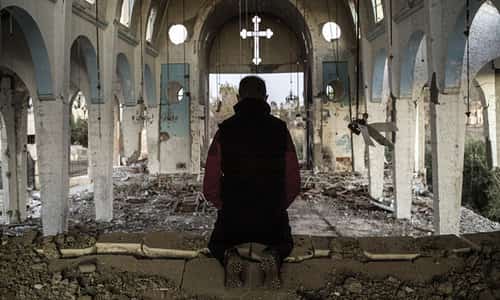 By PNW Staff May 30, 2017
Share this article:
The years of bloody conflict still raging across the Middle East in Iraq, Egypt, Syria and other failing states have made headlines for the mass migration of Muslims out of the region, but there is another side to this story: the largest Christian exodus in modern history.
As the fellows at the Center for American progress point out, Christians, now faced with murder on a genocidal scale, have abandoned their ancestral homes across the Middle East under intense pressure from not only from civil wars, ISIS and other Islamic extremists but also from increasingly discriminatory legal codes and institutions in Muslim countries.
Threatened with discrimination, enslavement and death at the hands of Islamic radicals, millions of families are forced to make a desperate choice to leave behind everything they know and seek safety in the West.
Christian migration from the Middle East is not a new phenomenon, though its acceleration is.
The exodus started more than a hundred years ago and has come in stages as people were pulled by economic opportunities in the West and pushed by civil wars in Lebanon and conflict in Iraq in the 1990s.
There was hope for religious tolerance at the start of the decade in 2010 when protestors took to the streets in more than a dozen Middle East countries to protest the excesses of dictatorship, but this was short lived as these popular movements were subverted by Islamic radicals or descended into civil strife that made conditions far worse for Christians.
Since 2011, genocide and the accompanying exodus of Christians from the region have proceeded at an alarming rate. In 1910, Christians accounted for 13.6% of the population of the Middle East, according to Todd Johnson, director of the Center for the Study of Global Christianity at Gordon-Conwell Seminary.
Over the next 100 years, this number plummeted to only 4.2%, according the data gathered by researchers in 2010.
Today, projections for the Christian population in 2025 put the number at just over 3%, yet even this number now seems high considering the ISIS-led near-total depopulation of Christian populations in parts of Iraq and Syria, alongside the continued campaign of violence in terror in Egypt and across the region.
Egypt
Home to Coptic Christians who date their faith and places of worship to the apostle Mark's arrival in Alexandria, Egypt is the site of a bloody campaign of Islamic terror.
Earlier this week Islamic gunmen waved down a bus filled with Christians and instructed them to recite the shahada, the Islamic declaration of faith.  When they refused the gunmen opened fire killing 28.
Palm Sunday was also interrupted this year by suicide bombings in two Egyptian Coptic churches carried out by ISIS. The bombs detonated in the midst of the worshippers gathered for mass in Alexandria and Tanta, killing at least 45 and injuring more than a hundred more.
These attacks, however, are only the latest in a series of increasingly brazen acts of violence. Egypt's government had pledged to protect the Christian minority, but failed to repair the metal detector at the church entrance or raise the alarm after bombs were found a week earlier.
Experts estimate that around a million Copts have emigrated from Egypt since the 1950s and the pace of the displacement has accelerated sharply since ISIS began its campaign of terror. ISIS issued fresh warnings after the Palm Sunday attacks, advising Muslims to keep their distance from Christians who, it promises, will be the targets of terrorist attacks.
As Christians swept away the blood-soaked debris from the blast, one church-goer held up his Egyptian national ID card to a reporter, "This ID says whether we are Muslim or Christian.
So how did that suicide bomber get into my church? If this identification isn't for my protection, it's used for my discrimination." Systematically excluded within Egypt and elsewhere, Christians were to be the beneficiaries of a Trump administration refugee program.

Federal judges blocked such efforts since they would discriminate based on religion, even though that is exactly what took place, in reverse, under the Obama administration.
Syria
Christians living in Syria were subjected to the worst levels of persecution in the world not only with the outbreak of Syria's vicious civil war in 2011 but also the rise of ISIS.
Christian monitoring groups estimate that nearly half of the nation's population of 2.5 million Christians left the country to escape the violence.
Headlines are filled daily with stories of massacres and enslavement for those who stayed in a country that descended into the barbarism of ISIS on one side and cruel dictatorship of Assad on the other.
Those Christians who didn't head for Europe often moved to Lebanon, a country that has somewhat recently became a relative calm in the storm for Christians where they are able to practice their faith freely and even hold some political power.
Syria, however, shows no signs of improving its tolerance for Christians and experts believe that the Syrian Christian population will continue to decline at a rapid pace.
Iraq
The greatest population displacement, an exodus of Biblical proportions, has taken place in Iraq. First, during the sanctions imposed on Saddam Hussein in the 1990s and continuing through internecine conflicts between Sunni and Shiite Muslims.
The Christian population had dwindled to 1.3 million by 2003 but is now estimated, just 14 years later, to number around 300,000.
First al-Qaeda and then ISIS, as Christians have been systematically massacred, enslaved and displaced. Even when able to return to their homes, they most often come home to little more than ruins, picked clean by their neighbors.
Bashar Warda, a Chaldean bishop in the city of Erbil, the Kurdish capital, told journalists from The New Yorker, "It's very hard to maintain a Christian presence now. Families have ten reasons to leave and not one reason to stay.
This is a critical time in our history in this land. We are desperate." Entire districts have been emptied of Christians. Still hundreds more continue to flee Northern Iraq each month
A Modern Exodus
The Christian genocide in the Middle East is one of the great human tragedies of modern times. The cradle of civilization and many of the most significant sites of the faith is now lost to Christianity in a region dominated by Islamic theocracy that rules nearly unopposed.
The future promises to bring only more conflict between rival Islamic sects and a hardening radicalism that rejects modernity, other cultures and belief systems distinct from Islam.
The moderating effect that minority religious groups, Christians and Jews in this case, can have on a society will be removed and both Sunni and Shiite sects will grow increasingly strict and absolutist.
Pushed into exile, Christians from the region will watch from afar as their homes become the breeding ground for new generations of Islamic fundamentalism and theocratic despotism.