Will Muslim Voters Impact Swing States In US Election? 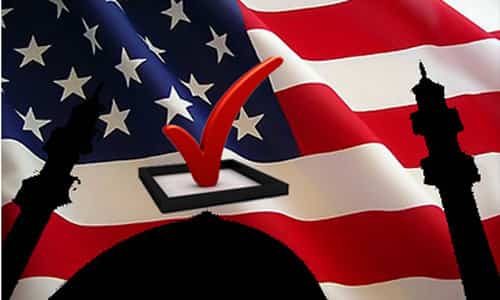 By Tom Olago February 17, 2016
Share this article:
Only time will tell what the U.S presidential outcome will be, but in a tightly-contested race between the Republican and Democrat nominees, no doubt a voting 'swing' bloc could make the difference between who gets to be the 45th U.S President, and who loses out.

Which bloc will be the one to swing the US election? It is possible that Muslim votes could well be the deciding factor, especially if all 1 million eligible Muslims register to vote. The Muslim population in the United States is estimated at 3.3 million, about 1% of the total American population. A Pew Forum report found that Muslims accounted for 0.9% of American adults in 2014, up from 0.4% in 2007, due largely to immigration.
Hillel Fendel for israelnationalnews.com recently reported on this, quoting Nihad Awad, Executive Director of CAIR (The Council on American-Islamic Relations, a Muslim Brotherhood-linked group). Awad has reportedly called on the growing numbers of American Muslim voters to increase and utilize their electoral power.
Specifically, Awad said that the increasing Muslim populations in eight "swing" states should take advantage of their strength for the upcoming presidential elections.
"What Muslims do and do not do in 2016," Awad stated at an annual Muslim American Society and Islamic Circle of North America conference in Chicago a month ago, "can influence not only the future of America itself, but also the future relationship between America and the Muslim world. Your votes are your negotiating power; if you don't like Islamophobia, or what candidates Donald Trump or Ben Carson said, get busy in 2016... register to vote!"
But that's not enough, according to Awad's vision: "Register other people to vote! Turn your Islamic centers and mosques into voter registration centers and polling stations. This is the time to show our presence. Train yourself in how to get involved in the political process... No party should take us for granted."
All indications are that the Democratic nominee stands to benefit most from Muslim fears and frustrations. Fendel points out that a six-state survey released by CAIR shows that 73% of registered Muslim voters say they will go to the polls in upcoming primary elections - and that no fewer than two-thirds will vote for Democratic Party candidates.
The survey covered the six states with the highest Muslim populations: California, New York, Illinois, Florida, Texas, and Virginia. Florida, Ohio and Virginia are the "swing" states that Awad hopes American Muslims will specifically target.
Sharona Schwartz for theblaze.com recounted how the CAIR chief plans to increase Muslim influence on the electoral process with the goal of eventually promoting the most Muslim-friendly presidential candidate.
"We would like to have an accurate assessment of our voting power, of our inclination on issues. Based on that, were going to meet with presidential and local candidates on issues of concern to American Muslims, and were going to negotiate with them," he said.
Hillary Clinton made a campaign stop last week in Beaumont, Texas. Only six people were there to greet her. Her security detail outnumbered her supporters by quite a bit. She wouldnt talk, wave to or even acknowledge those there to greet her. As bad as that is, its not the real story.
The real story is that, after landing, Clinton headed off to a fundraiser in West Beaumont, where she was greeted by around 150-200 Muslims, most of whom were of Pakistani origin. The event was held by Pakistani businessman Tahir Javed and Hillary raised approximately $500,000 by pandering to Muslims, making it "one of the top five private fundraisers Clinton has had in this country."

How effective the actual Muslim voting will be, remains to be seen but some aspects are fairly predictable if voting patterns in the 2012 elections are sufficiently indicative. Abdus Sattar Ghazali published an analysis of "American Muslims in 2012" in amperspective.com. Highlights are as follows:
" More than 85 % of American Muslim voters picked President Obama in November 6, 2012 election, according to an exit poll released by CAIR, the nation's leading Muslim civil rights and advocacy organization. It may be recalled that a similar CAIR exit poll in 2008 showed that 89% of American Muslim voters picked then-candidate Barack Obama.
" Poll findings indicated that 95.5% of the registered Muslim voters went to the polls on November 6, 2008.  85.7% cast their ballots to re-elect President Obama.
" On party affiliation, 41.5% considered themselves Democrats. A similar number, 40.6% considered themselves politically independent. Only 7.4% said they were Republican. "The fact that more than 95% of Muslim respondents went to the polls is a clear indication that they are fully participating in our nation's political process and are part of the fabric of America," said CAIR National Executive Director Nihad Awad . "Muslim voters in swing states such as Florida, Virginia and Ohio seemed to have played a critical role in tipping the balance in the presidents re-election victory."
" There was a substantial increase in the number of political candidates using Islamophobic tactics in an effort to leverage votes, and use such tactics as a platform to enhance their political visibility. Consequently, Muslims rejected the Republican Party at the polls in 2008 and 2010. According to the American Muslim Taskforce on Civil Rights and Elections, just 2.2 % of Muslims voted for Sen. John McCain in 2008.
" Newsweek reported a Gallup Center for Muslim Studies survey as saying that U.S. Muslims favored Obama in greater numbers than did Hispanics (67 % of whom voted for Obama) and nearly matched that of African-Americans, 93% of whom voted for Obama.
Will history repeat itself? If these trends hold, it seems that the Democratic nominee of 2016 will carry the bulk of the Muslim vote  especially if current GOP frontrunner Donald Trump ends up becoming the Republican Partys flag-bearer. Trump has made no secret of his intentions to suspend and then manage Muslim immigration, and hasnt endeared himself much to Muslims  both locally and worldwide.
What still remains a mystery is how much the Muslim vote will eventually count but barring any major and unforeseen developments, the Democratic Partys nominee is poised to reap the most , due largely to support from current President Barack Obama whom Muslims overwhelmingly voted for in 2008 and 2012.