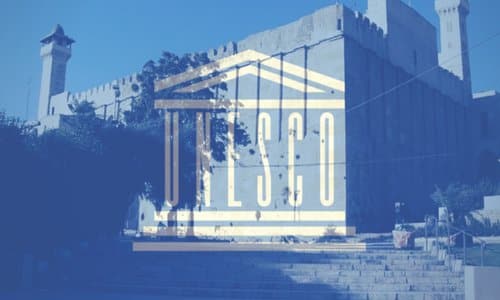 By Ben Cohen/Algemeiner.com July 10, 2017
Share this article:
Israeli officials and Jewish leaders in the Diaspora reacted with fury following Friday's vote at UNESCO -- the UN's global cultural agency -- to declare the Tomb of the Patriarchs, a key Jewish holy site in the West Bank city of Hebron, an "endangered Palestinian world heritage site."
The resolution -- which claimed the tomb was "faced with serious threats which could have deleterious effects on its inherent characteristics" while under Israeli control -- passed UNESCO's World Heritage Committee by 12 votes to 3 during a session of the committee's annual meeting in the Polish city of Krakow. Six countries abstained.
The nations voting in favor included "the Arab bloc, Cuba, Zimbabwe and other dictatorships," a report from Geneva-based monitoring organization UN Watch said.
The storm of condemnation in the wake of the vote was led by Israeli Prime Minister Benjamin Netanyahu, who denounced it as "another delusional UNESCO decision," and reaffirmed that Israel would "continue to guard the Cave of the Patriarchs, to ensure religious freedom for everybody and guard the truth."
The first Biblical patriarch, Abraham, and several male and female members of his immediate family are buried at the site.

Israeli Deputy Foreign Minister Tzipi Hotovely slammed UNESCO for passing another in a series of anti-Israel resolutions; just this week, UNESCO described the Jewish state as an "occupying power" in its capital, Jerusalem.
"This is a badge of shame for UNESCO who time after time chooses to stand on the side of lies," Hotovely said. "In another thousand years, the Cave of the Patriarchs will remain under Jewish sovereignty and UNESCO will cease to exist as a heritage organization."
Danny Danon, Israel's ambassador at the UN, attacked UNESCO for its decision "to disassociate Israel from the burial grounds of the patriarchs and matriarchs of our nation" as "an ugly display of discrimination, and an act of aggression against the Jewish people."
Other Israeli influencers took to Twitter to register their disgust, among them Foreign Ministry spokesman Emmanuel Nahshon, ex-IDF international media spokesman Peter Lerner and Knesset member and former Israeli Ambassador to the US Michael Oren.
International Jewish groups also expressed outrage. In a speech to the World Heritage Committee, Shimon Samuels -- director of International Relations at the Simon Wiesenthal Center -- declared, "Mr. Chairman, no other people or religion has been so maligned in the WHC. We would have been the first to protest were the victim have been Islamic heritage, but the Judeo-Christian heritage is continually under attack in this Chamber."

Ronald Lauder, president of the World Jewish Congress (WJC), stated it was "disconcerting that UNESCO member states have adopted yet another cynical distortion of reality, a subversive attempt to rewrite history and deem the Old City of Hebron as a Muslim-Palestinian site alone while denying its historic and religious importance to Jews and Christians."
Yishai Fleisher, a spokesman for the Jewish community in Hebron, called upon the Israeli government "to issue an appropriate answer to this reprehensible decision: to immediately suspend all payments to UNESCO and transfer those very same funds for projects that will strengthen Jewish Hebron."
A number of country delegations at the UNESCO meeting expressed their exasperation over the vote. Australia's representative criticized the "divisive decision on Hebron" that was "harmful to Israel-Palestinian relations," while Canada said it "takes issue with the decision today on Hebron which ignored expert opinion."
The International Council on Monuments and Sites (ICOMOS) -- a professional body that investigates claims that historic sites are endangered on behalf of UNESCO -- earlier rejected the Palestinian claim that the Tomb of the Patriarchs was an endangered site.

Its assessment on Hebron, published on Sunday, criticized the Palestinian proposal for ignoring Jewish and Christian heritage in the city, "even though extensive remains testify to these links."
The United States delegation said the vote was "divisive, confusing, impossible to justify," given that the Tomb of the Patriarchs was "under no danger or imminent threat."
This followed Tuesday's appeal from Nikki Haley -- the US ambassador to the UN -- to the heritage committee not to "waste" its time "on this sort of symbolic action."
After UNESCO's Hebron vote, Prime Minister Benjamin Netanyahu announced he had ordered a $1 million cut in Israel's annual United Nations.
Originally published at Algemeiner.com - reposted with permission.