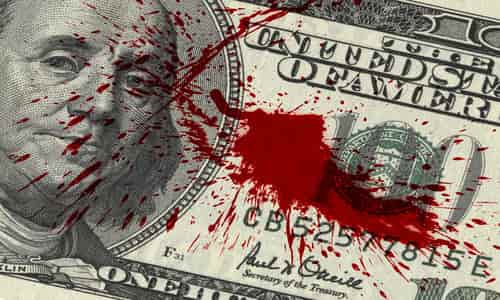 By Barney Breen-Pornoey/Algemeiner.com July 21, 2017
Share this article:
The Palestinian Authority's 2017 budget shows a "huge increase" in the funding of salaries for imprisoned terrorists and the families of "martyrs," an Israeli research institute revealed on Wednesday.
According to Palestinian Media Watch (PMW), the amount of money allocated by the PA for payments to terrorists jailed in Israel rose 13% this year to $158 million -- compared to $135 million in 2016.
During the same time frame, disbursements for family members of dead terrorists increased by 4% -- to $197 million from $183 million.
Overall, PMW said, the PA is spending $355 million this year on the direct funding of terrorism.
Itamar Marcus -- the founder and director of PMW -- told The Algemeiner on Wednesday, "There is no greater promotion of terror then the PA's financially rewarding terrorists who have murdered Israelis. However it is critical to understand why the PA pays the salaries and why they refuse to stop.
The PA claims that they have a right under international law to 'resist' Israel and that includes murdering Israelis.
They argue to their own people that to stop paying the salaries to prisoners would be to admit that all of the prisoners including murderers of women and children are terrorists and not legitimate 'freedom fighters.'
Accordingly, as horrific as the PA's rewarding terror is, it is a symptom of a much deeper problem. The essential problem is that the PA tells its people they have a right to kill Israelis. Paying salaries to the killers who get caught and are imprisoned is a symptom."
Marcus continued, "This is a slap in the face to the United States and the other European donor countries who have all condemned this practice and have demanded that the PA stop immediately if they want to receive foreign funding. I expect that this information will have a great effect on the Taylor Force Act right now before Congress."
The Taylor Force Act referred to by Marcus would, if passed, cut off American funding of the PA if the terror payments are not halted. The legislation is currently being considered by the Senate Foreign Relations Committee.

Commenting on the data published by PMW, Rabbis Marvin Hier and Abraham Cooper -- the dean and associate dean of the Simon Wiesenthal Center in Los Angeles -- stated on Wednesday, "Is PA president running a mafia or a government?
No Israeli government -- right, center, or left -- can seriously negotiate with a leader who embeds a pay-for-murder scheme to kill Jews."
"[PA President Mahmoud] Abbas' priorities when it comes to his own people border on the bizarre," they went on to say.
"He spurned desperate pleas from mothers and withheld the funds to provide full electricity for his living constituents in Gaza, yet he eagerly escalates financial rewards for terrorists -- dead and alive."
"Now is the time for Germany's [Angela] Merkel and France's [Emmanuel] Macron to decrease their allotments to the PA and tell Abbas to stop playing Santa Claus for terrorists," Hier and Cooper concluded.
Originally published at Algemeiner.com - reposted with permission.