The Anti-Israel Bias And The Death Of Journalism 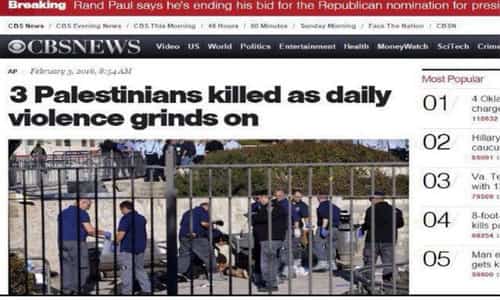 By Judith Bergman/Israel Hayom February 23, 2016
Share this article:
"Three Palestinians killed as daily violence grinds on" was the CBS headline after three Arab terrorists armed with guns, knives and bombs attacked two border policewomen at Damascus Gate in Jerusalem. One of the police officers, 19-year-old Cpl. Hadar Cohen, was killed in the attack. The other is in hospital with serious injuries.

There is nothing unique about this headline, though the Foreign Ministry correctly slammed it as "biased and dishonest" and an example of "unparalleled chutzpah."
Later in the day, CBS changed the headline to "Israeli police kill 3 alleged Palestinian attackers." Eventually, under strong pressure from multiple government agencies and countless critics on social media, the headline was again changed, this time to "Palestinians kill Israeli officer, wound another before being killed."
Too little, too late.
Such headlines proliferate every time there is a terrorist attack (if it is reported at all) and by now, they surprise few people, maybe apart from the Foreign Ministry. The BBC and The Guardian, as well as the big news bureaus such as Reuters and AFP, positively excel in headlines like this. In November, AFP published a list of countries suffering from terrorism and infamously omitted Israel. 
This kind of "reporting" is biased to the point where it becomes equivalent to incitement against Israel and collusion with the terrorists' aims. It is not journalism in any sense of the word. What passes for news today constitutes a travesty of both journalism and any sense of moral obligation that journalists once had to report the factual news, instead of pushing their own highly politicized and subjective "narratives." Facts, as the Israel-hating historian Ilan Pappe once said, do not matter. Only ideology does.
Unfortunately, the profession that is paid to report only facts, and to do so according to a certain ethical standard, has come to subscribe to that essentially Marxist view of the world. 
Journalism is dead and buried, but this did not happen yesterday, it happened decades ago. Who remembers the extreme reporting that took place during the First Lebanon War in 1982? Back then, the French -- always avant-garde -- led the media pack with the daily Le Monde publishing diatribes such as "fascism in contemporary Israeli colors," and comparisons between Israelis and the Nazis in France during World War II.
The old, tattered cliche, "It begins with the Jews, but it does not end with the Jews," is fitting in this context. While these headlines -- or cover-ups of the terrorist attacks by journalists through simple non-reporting -- are infuriating and speak volumes of an extreme anti-Israeli or anti-Semitic media world, it would be useful to remember that the media does not report truthfully in many other respects, either. After the mass sexual assaults on New Year's Eve in various European cities, especially in Germany, there were attempts by the media to cover up what had occurred.
Germany's public broadcaster, ZDF, made a decision not to report on the attacks until four days after they had occurred. A former government official, Hans-Peter Friedrich, Chancellor Angela Merkel's interior minister from 2011 to 2013, even accused the media of imposing a "news blackout" and operating a "code of silence" over negative news about immigrants.
"It is a scandal that it took days for the media to pick up the reports," Friedrich said.
One commentator writing in The Guardian even admitted that the attacks by migrants on European women were something that liberals do not wish to talk about.

"So no wonder liberals would do anything to avoid fanning these flames, since we see in all this righteous indignation a blatantly racist old trope about barbarians at the gates. We bend over backwards to report it responsibly, to moderate the frothing rage," the comentator wrote.
Liberal journalists have an extremely reductionist, almost primitive and entirely false worldview, heavily influenced by old Marxist revolutionary tropes, some of them going straight back to the Soviet Union. According to this view, the world consists only of two sides: oppressors (Westerners, governments, Israelis, etc.) and oppressed (Palestinian Arabs, the Muslim migrants in Europe, etc.).
Journalists clearly believe that their task in the world is to rectify this (false) state of affairs by actively contributing toward toppling the oppressors and "helping" the oppressed. Entire generations since the early 1970s have been raised in this kind of revolutionary, ideological thinking and it is still going extremely strong around university campuses in the United States and Europe. 
There is no miracle remedy against this, because it is part of the culture -- a sick culture, perhaps -- but the phenomenon is so pervasive that it cannot be isolated to journalism. It pervades academia, it pervades culture -- even here in Israel -- and it pervades governments.
The only ones who can change it are we, the people, by protesting loudly and consistently, by boycotting the mainstream media and the cult of ideological narratives that it spawns on a daily basis. And if we don't, then, just as with our political leaders, we get the media that we deserve.
Originally published by Israel Hayom.  Reposted with permission.