The Perfect Robbery, The Cashless Society 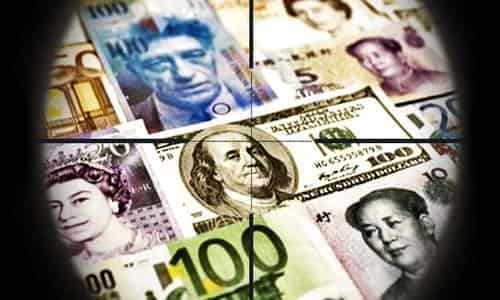 By Samantha King/Activist Post August 28, 2017
Share this article:
What seemed almost like science fiction to our parents is coming scarily close to the realm of feasibility: more and more countries are talking about stopping the production and use of cash in their economies.
But the push is coming from somewhere else. Powerful lobbies are pushing ever stronger, in order to achieve total and absolute control of our economies.
In 1998, four guys started an Internet banking company, Confinity, in the early years of online services. Business was slow, as people either didn't know about such services or distrusted the idea of immaterial money, until a now-world-famous Elon Musk joined Confinity, re-shaped it, and renamed it PayPal.
Four years later, the business was sold to eBay for 1.5 billion dollars. In other words, not only was PayPal there from the start, but it had the perfect position to observe the very tight relationship between the share of the population using online monetary services and the cashflow a business could expect to make (close to 10 billion dollars today for PayPal alone).
Of course, it wasn't long before the PayPal enterprise gave other businessmen some ideas and, today, hundreds of online payment solutions exist. The dwindling share of cash-based transactions in the world has made online payment a profitable market, on which the operating companies (online payment solutions and banks) are keen to pursue the expansion, all around the world.

Recently, Mastercard convinced the Kenyan government to push the cashless front nationwide.  "Mastercard is committed to extending financial inclusion for the unbanked and under-banked in Kenya," said Daniel Monehin, Division President for Sub-Saharan Africa, Mastercard.
"Innovation is central to achieving our vision of a world beyond cash in Kenya and across the continent. We are committed to developing market-relevant payment solutions that enhance the adoption of cashless transactions. By working together with industry, merchants and businesses, we will achieve this, in East Africa."
And just about every other country in the world has such economic agents promoting a world without cash.
Cash is problematic to banks. It is expensive to manage, hard to take from customers and, worst of all, it is a possible gaping wound, if a bank run occurs.
In a world without cash, customers would be forced to remain within the banking system, where all sorts of fees can be discretely and quietly shaven off millions of accounts. But banks and online payment solutions can hardly present those arguments in their race to kill cash.
Instead, they invoke online financial performance, digital innovation, fighting tax evasion, fighting crime and corruption and all the other woes attributable to physical currency.
But the intent is quite clear: getting rid of currency.
In February of 2017, PayPal forged an alliance with Philippines telecom operator Globe, to push cash aside, in favor of online solutions. Globe President and CEO Ernest L. Cu said "the company wants to bring a wholistic payment solution here in the Philippines for cashless solutions. Our joint fight is against cash... It helps the economy hugely if people go cashless".

So much for not putting all eggs in one basket. But banks and online payment solutions can't do this on their own, they need a powerful ally to push their plans through.
Such arguments are music to governmental ears: the cash share of economies has always been the part to elude their control. Once money becomes virtual, the government has control and can access the data. Which means a great increase in the taxation base, as well as in the surveillance capacities of the State.
Therefore, many government agencies have been working hand in hand with private businesses to promote the disappearance of cash. Anti-cash lobbies have formed in virtually every country in the world, and some governments have started singing their tune.
Australia has been slowly, carefully and quietly promoting the disappearance, despite staunch opposition from individual-freedom whistleblowers.
When the Australian government started issuing new cashless welfare cards, the Greens senator Rachel Siewert  accused the human services minister, Alan Tudge, of "cherry-picking" data to feature in the government's six-month progress report: "It is odd how this did not make it on to the minister's top lines when he was spruiking the card to media".
On the much starker side of the Indian Ocean, India's prime minister nearly broke his own economy with a last-minute, ground-breaking decision to suppress overnight the validity of India's most common banknotes.

Here again, it was sold as a benefit to the population: "Our dream is that there should be cashless society. This is correct that 100% cashless society is never possible. But we can make a start with less-cash society - then cashless society will not be a far-off destination". The results of this less-cash society were not truly beneficial.
For the first time ever, a private taxation system is about to see the light.  A cashless society would enable banks and online businesses to walk right in the steps of the greatest money-lawnmower (the State) for a second cut.
If the anti-cash movement succeeds, customers (citizens, that is) will have nowhere to go, as the proceeds of their work and their daily transactions will be completely under the control of banks and monetary payment companies.
The only thing this powerful alliance of bankers, businesses and government agencies needs to do now is to convince their citizens it is a good idea.
Originally published at Activist Post - reposted with permission.