Battle For The Seas - China Gaining On US Military Superiority 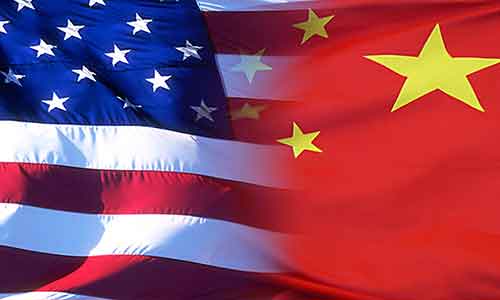 By Tom Olago February 29, 2016
Share this article:
The U.S Navy has made some notable strides towards improving its technological and marine weaponry. Yet other major armies, such as Chinas, are racing to match and exceed these capabilities. Will they succeed?

They eventually may, but right now the U.S Navy seems to have the edge. Eric Tegler for popularmechanics.com reports that the Navy says it will now modify the record-setting, Raytheon-built Standard Missile-6 to act as a supersonic anti-ship missile. This action will provide Navy cruisers and destroyers with a weapon capable of reaching such targets more than 200 nautical miles away.
"We are going to create a brand-new capability&We're modifying the SM-6 so that in addition to missile defense, it can also target enemy ships at sea at very long ranges," said Defense Secretary Ashton Carter.
This new capability is clearly aimed at countering the surface strike threat from increasingly sophisticated Chinese naval assets, forcing them to stand off at ranges more favorable to U.S. aircraft carriers. The AGM-158C Long Range Anti-Ship Missile, also under development, has the same purpose and an even longer potential range.
In addition, the Associated Press recently reported in a review that was also published in foxnews.com that the Navy has been testing an electromagnetic railgun, and could have an operational unit ready to go on one of the new Zumwalt-class destroyers under construction at Bath Iron Works.
Development of a futuristic weapon depicted in video games and science fiction is going well enough that a Navy admiral wants to skip an at-sea prototype in favor of installing an operational unit aboard a destroyer planned to go into service in 2018.
Railguns use electricity instead of gunpowder to accelerate a projectile at six or seven times the speed of sound - creating enough kinetic energy to destroy targets.
"The Zumwalt-class is one of a number of options being explored for the electromagnetic railgun," said Lt. Cmdr. Hayley Sims, a Navy spokeswoman. "Due to the size, weight and power requirements, some platforms will be better suited for the technology than others."
The railgun, along with laser weaponry, are two futuristic technologies that Adm. Pete Fanta, the Navy's director of surface warfare, said have evolved from being a matter of scientific research to one of practical engineering. The Navy is interested in those weapons - along with smart munitions that can improve existing naval guns - because of their low cost as well as lethality.
"The Navy is determined to increase the offensive punch of the surface warships," said Loren Thompson, a defense analyst at the Lexington Institute. "To do that with a limited budget, it needs to look at everything from smart munitions to railguns to lasers."
A recent cnn.com report said that the Navy is also looking to increase its use of drones that are more and more independent of direct human control despite the concerns of alarmed scientists and inventors over increasing automation in the military.
In recent days, Pentagon officials and Navy leaders have spoken about the program and the push to develop more autonomous and intelligent unmanned systems. Secretary of Defense Ash Carter in a speech earlier this month confirmed that the United States was developing "self-driving boats which can network together to do all kinds of missions, from fleet defense to close-in surveillance, without putting sailors at risk."
And Rear Adm. Robert P. Girrier, the Navy's director of Unmanned Warfare Systems, discussed the effort at a January event at the Center for Strategic and International Studies. The drive is being dubbed "human machine teaming," which uses unmanned vehicles that are more independent than those piloted or supervised by human operators.
Girrier told the audience that the "technology is there" and that more autonomous drones would allow the United States "to achieve supremacy at a lower cost." Experts concur that the technology will soon be available.
Konstantin Kakaes, a fellow at New America, a Washington-based think tank that has conducted extensive research into drones told CNN that the ocean presented a rich environment for drones to function independently since communication with human operators is harder underwater and there are "no innocent bystanders to watch out for."
The Navy's push comes despite critics expressing increasing alarm at further automating drones, advances that have sparked fears of militaries developing robots that can kill without accountability.
Girrier, however, defended autonomous unmanned systems, saying that the rules of engagement governing when the unmanned systems could attack would be crafted by people in order to retain the "human command element."
China has taken note of all these developments but hasnt just been watching nervously and enviously. As Europe Newsweek recently reported through Jonathan Broder, last September China displayed a long-anticipated family of anti-ship missiles unveiled at a military parade.
One of the missiles, the Dongfeng-21D, has a maneuverable warhead that can seek and close in on its target at 10 times the speed of sound, making it almost impossible to intercept. Experts say that this capability waters down U.S competitive advantage significantly.

According to U.S. naval intelligence, the missile can disable and possibly sink American carriers. Another anti-ship missile in the parade, the YJ-12, skims the surface of the water and then accelerates to more than twice the speed of sound as it hones in on its target.
Are these Chinese capabilities a serious threat to U.S aircraft carriers? Perhaps not. As Broder expounded, while China, Russia, and a few other countries have one or two smaller carriers, none approaches the size or capabilities of Americas fleet of 10 so-called supercarriers, also described as "the symbol of American naval power".
These nuclear-powered behemoths, longer than three football fields, and carrying up to 90 warplanes and a crew of 5,000, are seagoing airbases that have projected American power to the farthest corners of the globe since the end of World War II.
Yet Chinas new missiles - and fresh intelligence that Russia, Iran, and North Korea are working on similar weapons - are prompting an unprecedented debate over the future of carrier-based warfare, which is now considered outdated and comparatively inferior in a post-cold war world.
Jerry Hendrix, a retired Navy captain and now a defense analyst at the Washington-based Center for a New American Security is the leading critic of current carrier doctrine. He instead advocated the development for the Navy of its experimental drone that can fly 1,500 miles loaded with 4,000 pounds of precision munitions.
By enlarging that model's wingspan and weight, Hendrix says it could carry 6,000 pounds of smart munitions and fly 2,000 miles. An unmanned tanker version could refuel the killer drones in flight, increasing their range. "These are all things that we can afford within the budget that we have now," he says.
At a time when the threat from Chinese anti-ship missiles is growing and Pentagon budgets are shrinking, Hendrixs vision of a new carrier force have drawn considerable attention in defense circles but have hardly been embraced fully.
Chief of Naval Operations Admiral John Richardson argued instead that the Navy's newest warships have advanced missile defense systems to counter the Chinese threat, as well as sensors and targeting technology that provide data to commanders, pilots and ship crews in real time.
Commander William Marks, a Navy spokesman similarly stated:  "The aircraft carrier is still the only maritime force capable of executing the full spectrum of military operations to protect our country."
Hendrix and other defense experts, however, remain deeply skeptical that the Navy has an effective defense against the Dongfeng-21D. He says there is one more factor that argues against an expensive new fleet of aircraft carriersthe unacceptable political cost if one of them is destroyed.
"The loss of an aircraft carrier, with images of a thousand American dead, or just having it disabled, with all its airplanes and radars knocked out and huge gaping holes in it, is such a heavy political blow that we probably wouldnt risk it unless it was for the actual defense of the continental United States."