Smartphone Banking The Wave Of The Future 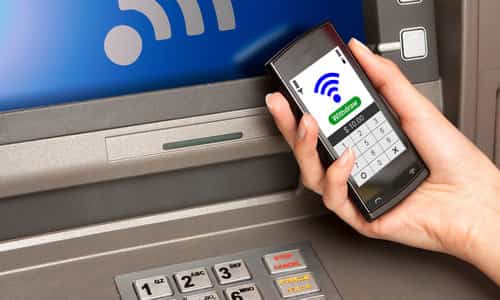 Debit cards seem to be the next victim in the crosshairs of the unstoppable smartphone. Who would have thought that debit cards could so easily and quickly be at risk of becoming an archaic relic of the past?
The average wallet or purse carries several debit cards. Yet, these popular and prevalent cards may very well be rendered obsolete soon, at least in some key respects. According to recent reports, smartphones are starting to replace cards at bank machines.
Globalpost.com reported that the "cardless" automatic teller machine (ATM) is gaining ground in the US and around the world, with smartphone technology allowing for speedier and more secure transactions.
Dozens of US banks are installing new ATMs or updating existing ones to allow customers to order cash on a mobile application and then scan a code to get their money without having to insert a bank card.
US banking giants Wells Fargo, Bank of America and Chase are in the process of deploying the new ATMs, as are a number of regional banks and financial groups around the world. Makers of ATMs and financial software groups are ramping up to meet this demand.
Its not just the transaction time reductions, added convenience and cost savings either that are making these options attractive. Risks related to debit card usage are also being minimized in their replacement process, and significant amounts of money stand to be saved from the reduced fraud risks.
"We think our model (using smartphones) reduces a lot of vulnerabilities," said Doug Brown, who leads mobile technology for FIS Global, a major provider of software and technology for ATMs. Brown said the FIS cardless system is being used at some 2,000 ATMs operated by at least 28 banks in the United States "and we're looking to rapidly expand that."
He said the system should be operational at some 80,000 machines in North America over the coming 18 months. And similar changes are coming in other countries, according to Brown.
A key vulnerability that the smartphone-based system aims to curb is the growing problem of "skimming" in which criminals steal the data on a card, often by inserting devices into the ATM card slot. By some estimates, skimming cost the global banking industry some $2 billion in 2015 and can lead to other kinds of fraud when card data is stolen.
Another security benefit, Brown said, is that authenticating on the handset reduces the time spent at the ATM to around 10 seconds instead of the typical 30 to 40 seconds
Other solutions in the works involve allowing access codes to be sent to cellphones rather than using PIN numbers to unlock debit card access. The Bank of America, Wells Fargo and Chase Bank are some of the financial institutions working in their own ways toward achieving this cardless ATM solution" based on NFC or near field communication technology.

Some of the new technologies will require only a software update to the ATM while others will need new hardware. ATM manufacturer Diebold is testing a "headless" teller machine, without a screen or keypad, which dispenses cash from interaction on the smartphone.
"What we are saying with this is forget the card reader, forget the PIN pad, we all have these devices in our pockets," said Dave Kuchenski, Diebold's senior business development manager for new technology.
Customers need only verify their identity, which can be done with the device's fingerprint reader, or possibly with an iris scanner on the ATM.
Wells Fargo is also developing cash machines that will allow customers to use their phones to get an eight-digit code to authorize a withdrawal. This system will support Android Pay.
Even the popular cellphone self-photography or selfie craze has become useful in this regard. As James Covert for the New York Post recently reported, selfies will soon be passwords for mobile banking.
Selfies and banking appear to be strange bedfellows - so exactly how does that work?
Covert explains: MasterCard says users of selfie pay will be asked to blink into their phone cameras to verify they arent simply holding up a photo. Owners of the latest iPhone 6 and 6s also will be able to use a fingerprint as an alternative form of verification.
The MasterCard solution is seemingly geared to combine both security and convenience. Consumers hate passwords&the most commonly used password is 123456, so they are not secure. To make matters worse, people often use the same password for multiple sites, further widening the exposure to hackers, said Ajay Bhalla, chief of MasterCards safety and security division.
Covert adds that with the new selfie tech, Mastercard is looking to reduce rejections of legitimate transactions, which cost the credit-card giant an estimated $118 billion each year  13 times more than the cost of actual fraud.
MasterCard now joins other big firms including Chinese e-commerce giant Alibaba in experimenting with facial recognition technology. HSBC also reportedly announced it will soon begin using voice-recognition and fingerprint technology to help its banking customers to access their money.
This banking industry onslaught of biometrics combined with smartphone banking technologies may well spell the beginning of the end not just for debit cards, but all plastic cards as used in their current forms.