Want To Boycott Israel? Put Your Money Where Your Mouth Is, Website Says 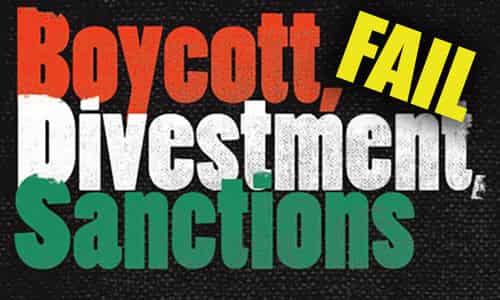 By Alina Dain Sharon/JNS.org March 03, 2016
Share this article:
When navigating to www.bdsguide.com, I'm immediately confronted with a clenched fist on a red banner against a crisp white background, and the matter-of-fact wording that I'm viewing the site in the Safari browser on Mac OS X. As an Apple product, my computer has been provided to me under the direction of CEO Tim Cook, who has met with Israeli Prime Minister Benjamin Netanyahu during a trip to Israel for the inauguration of one of the company's offices in the Jewish state.

"Please uninstall Safari," the notice warns me.
I'm also told that Apple recently acquired an Israeli chip manufacturer, Anobit, and opened a third research and development center in Israel. So I should definitely "uninstall OSX."
Continuing to browse the website, I discover an extensive and evolving list of companies and individuals that support Israel. At a time when the global Boycott, Divestment and Sanctions (BDS) movement is working hard to make the case for taking a stand against Israel, the research accumulated in this guide could seemingly serve the boycotters well.
But theres more to this than meets the eye.
"If you really want to hurt the Israeli government because of the policies you disagree with, I don't think that's a valid thing, but... you should probably go after the things that bring the most tax revenue to allow Israel to carry on its policies," says Avi, an information technology worker and staunch Zionist who launched the pro-Israel website in disguise with his co-founder, Daniel. Both Avi and Daniel have chosen not to reveal their last names due to concerns of being personally targeted by BDS activists.
BDSguide.com, Avi explains, provides "an ever-growing listcertainly not a complete list, but the most complete I've seenof what you would actually have to boycott if you're going to boycott Israel. And its a very, very long list."
Launched in January, this platform is hardly the first pro-Israel website on the block. But what makes it unique is two-fold. First, Avi cites the website's "innovative" facet of analyzing its own users.
"The fact that it tells you what in your computer is from Israel is definitely something that catches the eye," he says.
Second, the website employs the tools of satire and irony to reveal the hypocrisy of the BDS movement, offering a genuine challenge to those who legitimately want to boycott Israelwhich, considering the breadth of Israel's innovation, is nearly an impossible feat.
"I challenge anybody to go for one month without using anything thats on that list. One month would be next to impossible. You wouldn't be able to use a cell phone because almost all 4G chips are developed and manufactured in Israel. You wouldnt be able to use a computer because both Intel and AMD do their computer development in Israel. Intel just invested another $3 billion in Israel to expand there by 2030. Microsoft just celebrated 25 years there. High-tech accounts for at least 75 percent of Israel's industrial exports," Avi says.
Israel is also a beacon of medical innovations in areas such as MRI technology and cancer treatment. For instance, a U.S. cancer study hailed in February as potentially revolutionary for the treatment of leukemia is based on Israeli research (by Prof. Zelig Eshhar from Weizmann Institute of Science) showing that T-cells can be modified genetically to destroy leukemia tumor cells. Additionally, notes Avi, Israel's Teva Pharmaceuticals is one of the largest, generic drug manufacturers in the world. If youve taken a generic drug, chances are it comes from Teva.
What spurred Avialong with Daniel, a Web designer and developerto launch BDSguide.com was the Cornell University chapter of Students for Justice in Palestines uploading of a website built on the Israeli website-building platform Wix, with the logo of the platform clearly visible at the bottom of the page and the word "wix" appearing as part of the websites URL.
"We just found that kind of funny, so Daniel got in touch with me and said we should do something to point out this hypocrisy of them using Israeli technology to call for a boycott of Israel. There wasnt one definitive website that had everything, so we took on that challenge and decided to do it," Avi says.
In addition to the aforementioned features, the website hosts a section for BDS-related news. A recent post is dedicated to the mid-February controversy surrounding the cancellation of a conference dedicated to South Africa's water crisis because Israel's ambassador to South Africa, Arthur Lenk, was participating. BDS South Africa praised both the events cancellation and the "principled" withdrawal of the University of Pretorias Prof. Lorenzo Fioramonti, saying, "Water and water management is far too important for cheap Israeli gimmicks to advance its own oppressive agenda."
Israel, however, is a leading source of innovation in water irrigation and desalination technology, a feat that has recently allowed the country to help the state of California combat drought. An Israeli company, IDE Technologies, designed a desalination plant that will provide Californians with 50 million gallons of drinking water daily. The post on BDSguide.com, therefore, points out that those who really lost out due to the conference's cancellation were South African farmers.
The website also includes an interactive quiz intended to show the ubiquity of Israel's innovation across many fields; other sections highlight companies working or investing in Israel, or offer thoughts on the BDS movement in general. For example, a recent blog post focuses on BDS movement co-founder Omar Barghouti, noting that while he is calling for an academic boycott of Israel, the man himself is studying at Tel Aviv University.
While Avi performs the websites research, data collection, interaction, and social media engagement, Daniel handles the technical and artistic side of the platform. Born and raised in New York to Israeli parents, Daniel says the website has gotten largely positive feedback from the pro-Israel community.
"But possibly more important," he tells JNS.org, "is the attention that we've gotten from the BDS community, which is really our most unique angle here. If we were to make this site clearly pro-Israel, then we would be preaching to the choir and talking to only people who agree with our standpoint. Since it's initially a little ambiguous as to what our position is, this allows pro-BDS people to step in and view our material."

In fact, BDS activists have been sharing the website amongst themselves, first introducing it as a legitimate BDS website, and then correcting themselves when they've realized the website's true purpose.
"Most often when we engage in a conversation with them and we expose their hypocrisy... usually they have nothing to say in return" other than insults, Daniel says.
Some members of the pro-Israel community have raised the concern that the website may give the BDS community additional fodder that can be used to expand the boycott of the Jewish statean idea the founders dismiss.
"We're coming out with a comic series that actually depicts what it would be like for someone to actually boycott Israel. It essentially depicts a caveman who is trying any method he has left to spread the message of BDS... hoping that someone is going to hear him because he cant use his Apple computer, his phone, Facebook, and so on. So we're really not worried about this supporting BDS movements in any way," Daniel says.
At the end of the day, "people dont like a hypocrite," adds Avi.
The founders' long-term goal is to continue finding new and creative ways to reach people and spread this message. In addition to the upcoming comic strip, theyre planning an animated video. One specific way they hope to see their website used is in the realm of pro-Israel college campus activism. The campus arena is where [BDS] is felt the most, and students need to be armed "with the tools to defend Israel, and not just to defend Israel but to go on the offensive," Avi says.
In some of the latest BDS-driven anti-Semitic incidents on campus, 10 students interrupted a faculty council meeting at Brooklyn College by calling for "Zionists off campus," and swastikas were discovered on desks and walls at the College of Staten Island.
While some BDS tactics are "despicable and shouldn't be used by anyone," its important to recognize that "some of them we can actually learn from," Avi says.
BDS activists, he says, "are very theatrical about how they do things, and people respond to that∧ we would like to get involved and help pro-Israel campus activism spread that message a lot more effectively."
Aviva Slomich, international campus director for the Committee for Accuracy in Middle East Reporting in America (CAMERA), says BDSguide.coms Israel-positive information can serve as a useful tool for pro-Israel students.
"When BDS petitions arise, the BDS Guide can be used by pro-Israel activists as an educational resource to share with the students and faculty on their respective campuses. Its good to see that efforts are being made to expose the hypocrisy of the BDS movement and its racist agenda," she tells JNS.org.
While Avi and Daniel dont believe their website can change the minds of committed BDS activists, they hope to reach those people who are on the fence on Israel.
Reposted with permission from JNS.org