Growing Iranian-Hezbollah Confidence To Take On Israel After ISIS 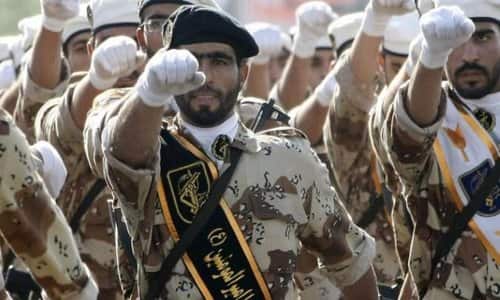 By Yaakov Lappin/Algemeiner.com October 11, 2017
Share this article:
A recent speech by Hezbollah chief Hassan Nasrallah contained unusually aggressive statements, calling for the ethnic cleansing of Jews from Israel, and claiming that a future war would lead to Israel's "demise."
Nasrallah said that Israeli Jews should "leave and return to the countries from which they came so they are not fuel for any war that the idiotic [Prime Minister Benjamin] Netanyahu government takes them to. ... They will have no secure place in occupied Palestine."
The speech echoed rhetoric recently espoused by the Iranian regime and its military officials, who said that Tel Aviv would be "destroyed" if Israel made "a mistake," and that Israel would not survive for more than 25 years.
"Israel should remain silent and count down the days to its death, because any minor mistake would lead to its demise as fast as lightning," said Iranian army commander Maj.-Gen. Abdolrahim Mousavi.

These threats contain two messages.
The first message is a reaffirmation of the Shiite axis' jihadist, ideological, long-term commitment to Israel's destruction. The second message is more immediate; it is an attempt to deter Israeli decision makers from trying to stop Iran and its proxies from taking over Syria.
Iran, together with its chief agent Hezbollah and several other Shiite militias, are helping the Assad regime complete its victory in Syria, with the assistance of Russia. This is a victory made possible by the mass murder and terrorization of Syria's Sunni population, and the ensuing mass movement of refugees out of the country.
The upsurge in war-like rhetoric towards Israel is a signal of growing Iranian-Hezbollah confidence, fueled by their victories in Syria.
Radical Shiite forces -- armed, funded and commanded by Iran -- are now moving into the vacuum left behind by ISIS. Tehran's objective is to turn Syria into another Lebanon: a heavily armed outpost from which Iran can launch attacks against Israel.
So far, the international community has shown no interest or willingness to stop this development from happening.

Despite the latest bluster, Nasrallah made sure to issue his statements from the safety of his Lebanese bunker -- an indication he still fears Israel's powerful reach.
Nasrallah and his Iranian masters have good reason to remain fearful of Israel, because it is the only state that has both the capability and determination to challenge their takeover of Syria.
There have been a series of reported Israeli precision strikes on weapons production centers and arms smuggling attempts in Syria. One strike reportedly targeted the Assad regime's Scientific Studies and Research Center (CERS) weapons facility, where chemical, biological and advanced ballistic missiles are developed and manufactured.
The targeted facility may have been where Iran tried to hand over powerful weapons to Hezbollah.
Israel is running a low profile campaign against the dangerous buildup of Hezbollah's weapons arsenal. These are arms that are produced in Iran and Syria, and trafficked to Lebanon. The Israeli campaign is a thorn in the side of the Shiite axis.
There is a wider Israeli warning here: Jerusalem has no intention of sitting on the side and watching Syria turn into an Iranian-Hezbollah base.
Israeli leaders are issuing their own warnings, making it clear that provocations by the Shiite axis can lead to devastation.
"The next conflict, if it erupts, will have a completely different character. Our enemies will try first to strike our population centers and civilian infrastructure. And if our red lines will be breached, the other side must know in advance that it is going to pay very heavy prices," said Israeli Defense Minister Avigdor Liberman.

In addition, Israel has stated that it will not tolerate an encroachment on its border by Iranian or Hezbollah forces operating in Syria. Sunni states like Jordan and Saudi Arabia are equally disturbed by events in Syria. But Israel is the only regional state with the ability to stop the Iranian game plan.
Only time will tell whether the world continues to turn a blind eye to the radical Shiite entrenchment in Syria, and leave Israel to deal with this mess by itself.
Meanwhile, recent comments by the head of the Mossad, Israel's overseas intelligence service, serve as a timely reminder of the fact that the Iranian nuclear program remains a threat -- and is only temporarily dormant.
"Iran continues to possess a vision of having a significant nuclear capability, leading to a military nuclear ability," Mossad chief Yossi Cohen asserted in recent days.
Furthermore, "Iran continues to act with increasing aggression in activating military forces and operations in the Middle East, closer to our border than ever, in the Lebanese and Syrian arenas [which are] as one. Iran continues to support Hezbollah, and recently, it is increasingly supporting Hamas. Iran continues to transfer advanced and precise weapons to terrorist organizations in our area," the Mossad chief added.
The Mossad, he said, conducts "thousands of operations, some complex and daring, in the heart of enemy states."
This not-so-cold war between Israel and the Iranian axis looks set to continue. Lines are being drawn in Syria by both sides. Israel's lines are purely defensive, while Iran and its agents are following a belligerent, encroaching agenda, which threatens to destabilize the entire region.
Originally published at Algemeiner.com - reposted with permission.