Messianic Soldiers In The Israeli Army: Bolder Than Ever About Their Faith 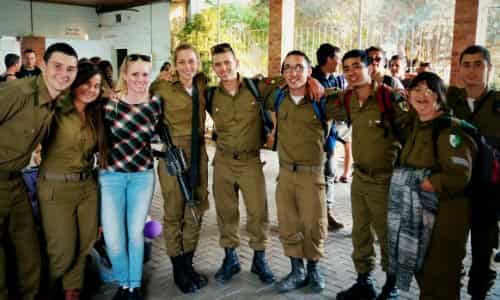 By Kehila News Israel March 07, 2016
Share this article:
Kehila News Israel (KNI) brings you the first published survey online of Messianic Jews serving in the Israeli army or IDF (Israeli Defense Forces).
KNI conducted the survey in cooperation with several local ministries that organize conferences and Bible studies on weekends for hundreds of Messianic soldiers currently serving in the IDF. All Israelis, men aged 18 to 21 and women aged 18 to 20, are required to do some form of military or community service.

This means that thousands of Messianic Israelis  Jewish and non-Jewish, men and women  have shared in the Israeli army experience at one time or another. We are especially proud of our soldiers who are facing the challenges of today, which are more complex than ever before.
From the survey results, it is clear that openness about Yeshua (Jesus) in the Israeli army is indeed the new "normal". Of those Messianic soldiers asked by KNI, a remarkable 96% say that their fellow soldiers know of their belief in Yeshua as the Messiah.
Possibly even more remarkable is that 78% of their commanders or officers know of their belief in Yeshua. This is certainly a generation that is bolder than ever in sharing and living their faith!

Equally encouraging feedback from the survey results is a largely supportive and pluralistic reaction from their fellow soldiers and officers with 64% of them having a "positive" response, 22% having an "indifferent" response and only 14% expressing a "negative" response upon hearing about faith in Yeshua.
Contrary to what older Israeli believers remember of their army experience, very few Messianic soldiers today face significant discrimination or persecution. Furthermore, a relatively high percentage (30%) responded that they have a fellow believer in their unit. As recently as fifteen to twenty years ago, it was a rarity for any two Messianic soldiers to be found serving together.
A statistic that has not changed over the years is the high percentage of Messianic IDF soldiers serving in combat. A vast majority of 57% responded that they are serving in combat units, with many serving in volatile areas, such as the Gaza border (9%), Lebanon border (15%), and Judea & Samaria (18%).
The believing community in Israel, both young and old, is known to be very Zionist, nationalist, law abiding, with a high motivation to serve God and Israel. There is a long history, albeit unknown to many, of Messianic believers serving in combat units and elite special forces including Sayeret Matkal (General Staff Reconnaissance Unit) and Shayetet 13 (Navy Seals). Todays Messianic IDF soldiers are no exception.
In reading this encouraging information about Messianic soldiers, it is important to remember that over the past five months Israel has been facing a new type of terror, in which lone attackers suddenly try to stab, shoot or run over unsuspecting Israelis. Their preferred targets are IDF soldiers. In the midst of these terror attacks are hundreds of Messianic IDF soldiers, serving the State of Israel, defending its citizens, and most of all, being a tremendous blessing and testimony to their fellow soldiers.

Another aspect of understanding the significance of the boldness and openness of Messianic soldiers today is the effect they have on the way Israeli society views believers in general, but particularly relating to immigration or aliyah.
Those who are already Israeli citizens are not questioned on faith matters by the IDF. Like all other Israeli recruits they are drafted and evaluated for their potential skill. However, Messianic Jews wanting to immigrate to Israel can face difficulties because of their faith.
It is noteworthy that even during the years when Messianic soldiers were still fighting for equal opportunities, a 1988 poll published in the Jerusalem Post found that 78% of Israelis were in favor of Messianic Jews immigrating to Israel under the Law of Return, as long as they could prove Jewish lineage  and were willing to serve in the IDF.
For three decades and more, Messianic Israelis have demonstrated that they can and do serve their country, not in spite of but because of their faith in Yeshua. This has resulted not only in more openness to accepting our service, but also more willingness to hear our testimony about Israel's Messiah.
Reposted with permission from Kehila News Israel