More Christians Finding Their Facebook Posts Can Get Them Fired 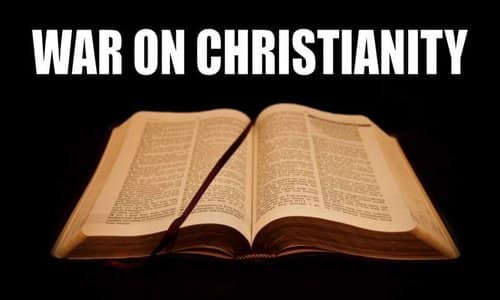 By PNW Staff October 31, 2017
Share this article:
The rise of social media has shown how the barriers between public and private are falling fast. Fueled by a climate of anti-Christian leftist bias, the devoutly-held Biblical beliefs of Christians are now under attack by private companies, labor unions and universities across the world.
Workers and students who express their opinion in favor of Christian principles or in opposition to the LGBT or abortion agendas now risk being fired from their jobs or expelled from academic programs.
In four recent cases, Christians were persecuted for expressing personal opinions, without a hint of hate speech, on social networks in Australia, the United Kingdom and the United States. These countries were once considered leaders in freedom of speech, but now it is only left-leaning speech that is protected.
First, the case of a young woman named Madeline. In Canberra, Australia, an 18-year-old contract worker for the company Capital Kids Parties was let go after she put up a Facebook filter expressing her opposition to a same sex marriage vote. Her message read simply, "It's OK to vote no".

According to her employer, Madlin Sims, this opinion was too "homophobic" to be tolerated. The boss went on to add, "Advertising your desire to vote no for same sex marriage is, in my eyes, hate speech. Voting no is homophobic. Advertising your homophobia is hate speech."
Any opposing viewpoints, no matter how reasonably expressed or moral in nature, seem to fit her definition of "hate speech". She went so far as to call Madeline's beliefs "dangerous to children" in case she might voice her beliefs and encourage youngsters to believe in the sanctity of marriage.
Opponents of the law allowing same sex marriage warn that situations such as this will only grow if the law passes, since this will embolden discrimination against those who believe in marriage between a man and a woman. Such was the case in the UK when the definition of marriage was changed and, despite promises that religious practice would not be impacted, there have been constant efforts to erode religious practice.
Next, take the case of Charlene Carter of Aurora, Colorado. She was fired from Southwest Airlines for objecting to her union's support for abortion. The veteran flight attendant found out that the union had paid to send its officials to attend pro-abortion marches.
The union dues that she was required to pay were being used to fund a campaign that promoted the murder unborn babies, and this prompted her use Facebook to contact Aubrey Stone, a union leader.

After her termination, she is now suing for religious discrimination, alleging that "Stone and her company's actions represented retaliation over her bid to stop paying compelled fees for its political, ideological, and other non-bargaining spending, and to engage in other speech and activity in opposition to Local 556".
The company had claimed that her pro-life stance was highly offensive in nature and that message she sent to Ms. Stone was harassing in nature. The lawsuit has now exposed the fact that a total of fourteen supporters of the effort to decertify the union were fired.
In a third case, a British man named Adrian Smith was demoted from his position has manager as well as suffering a 40% pay cut by Trafford Housing Trust. He had posted on Facebook that gay weddings in churches were "an equality too far".
Incredibly, Smith had expressed his support for civil unions and that the government could define marriage, as a civil contract, to include same-sex unions. He simply opposed the imposition of homosexual marriages in the Church. The case began in 2011 on Facebook when Smith linked to a BBC News article titled "Gay Church Marriages Get Go Ahead".
After linking to the article on his Facebook profile, he added the simple comment "An equality too far". Because he had 45 of his work colleagues as friends on his Facebook profile, his employer considered the post a public statement and took action against him.
Smith's lawyer said in court that "If someone expresses a lawful opinion outside of work, the fact that there is a risk some people might be offended by it, such risks always exist." Now the risk is that Christian views held outside of work are ground for demotion or even termination.
In the fourth case, Felix Ngole who attended Shelfield University in Manchester, England, was removed from a university program after a Facebook discussion in which he expressed his Christian beliefs. Once again, the opinion that marriage should be between a man and a woman, writing that "same sex marriage is a sin whether we like it or not. It is God's words and man's sentiments will not change His words."
Ngole, who was a second-year Master's student studying to be a social worker, then became the subject of a "Fitness to Practice" hearing, as he was advised that he "may have caused offense to some individuals" and had "transgressed boundaries which are not deemed appropriate for someone entering the social work profession."
This "Fitness To Practice" hearing was chaired by a prominent and long-standing LGBT campaigner, Professor Jacqueline Marsh, and both she and the university failed to disclose her interest in the issue at any point during the proceedings.

Following additional meetings, the Sheffield committee concluded that Ngole's beliefs would negatively affect his "ability to carry out a role as a social worker," and was consequently advised that he was "excluded from further study on a program leading to a professional qualification." The school recently informed Ngole that he is "no longer recognized as a university student."
"Your student record will be terminated shortly and your library membership and university computer account withdrawn. You may wish to contact your funding body for advice on your financial position," it wrote.
Felix appealed the decision arguing that this will effectively rule whether Biblical beliefs about sexuality, marriage and family are a bar to public office. On October 28, Felix lost his appeal before the Royal Courts of Justice. Sadly, Felix is another in a long line of Christian casualties; men and women who have been pushed out of public service because of their Christian beliefs.
He responded to the ruling with the following comments:
"I was born in Cameroon, under a dictatorship, where free speech was heavily censored. I had always been led to believe that in the UK people could share their beliefs and opinions without fear of persecution from public authorities. Of all places, I would expect universities to be places for free exchange of ideas and debate. It is shocking that, as a student, I can be thrown out just for believing in the Bible.
"I find it unbelievable that the person presiding over the disciplinary panel was a 'proud' Lesbian and a veteran LGBT activist, and that fact was never disclosed to me.
"Students go to university to discuss, debate and learn. We are seeing people banned from speaking at debating societies, and pressure groups banning anyone who dares to disagree with the liberal agenda being set by them. My case highlights the complicity of the liberal elite in this worrying movement."
In numerous cases, personal opinions and political speech on Facebook and other social media are being used to persecute Christians for their beliefs. Christian opposition to same sex marriage, abortion and other sins is being cited as hate speech in an increasing attack on Christian values in the developed world.