International Day Of Prayer For The Persecuted Church: Wake Up, Speak Out, Pray 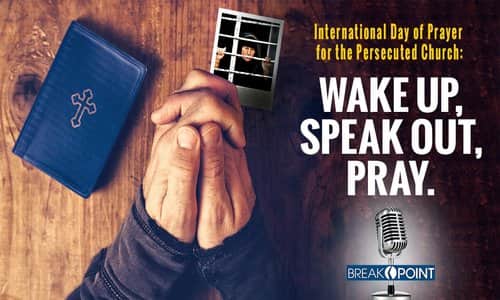 Islamic terrorists dressed in military fatigues stopped the buses and ordered the riders off. As one eyewitness later said, "As each pilgrim came off the bus, they were asked to renounce their Christian faith and profess belief in Islam. But all of them--even the children--refused."
The terrorists murdered 29 Christians before fleeing.
This Sunday is the International Day of Prayer for the Persecuted Church. It's a time to focus our attention on our brothers and sisters who are being arrested, tortured, murdered, and driven out of their homeland, simply because they worship Jesus.
The attack in Egypt was just one of many around the world last spring. In Germany, a Muslim stabbed a woman to death--one who had converted from Islam to Christianity.
In Pakistan, a Christian pastor was sentenced to life in prison and tortured for blasphemy. He reportedly has been tortured many times.
In North Korea, entire families are thrown into labor camps, where they often die from torture, beatings, and starvation.
In Turkey last year, American missionary Andrew Brunson was locked up on the absurd grounds that he was a terrorist.
Islamists have also swept through Niger, setting fire to Christian churches, orphanages, schools and homes. I could go on.

According to Open Doors USA, the worst offenders are North Korea, Somalia, Afghanistan, Pakistan, and Sudan. Sometimes Christians are persecuted by a hostile government, as in China.
But in the majority of countries, Islamist extremists are at fault. Tragically, western governments and the United Nations are not doing enough to prevent genocidal efforts, according to the Catholic News Agency.
They should--and they must. More Christians are being persecuted today than ever before in history. Some one hundred million believers are at risk. And yet, the world press largely ignores this massive humanitarian horror.
Why, you may ask, are Christians being persecuted in such great numbers today? In part, it's because they're considered part of the "imperial" West. And in many countries, Christians are the ones who are speaking out against the exploitation of the poor.
Third, Christianity is spreading rapidly in predominantly Muslim countries. And totalitarian leaders hate Christians because our ultimate allegiance is always going to be to God and not to a government.
Finally, writes Laura McAlister on the blog site Ignitum Today, "the hidden reality behind all persecution" is revealed in the book of Revelation: It teaches that Satan "makes war" on "those who keep the commandments of God and bear testimony to Jesus."

Folks, we need to wake up, speak out, and urge our leaders in government to do what it can to fight atrocities committed against innocent men, women, and children around the world.
Above all, we need to pray for them fervently. Lifting them up before God's throne is what persecuted Christians say they need most.
There are two websites I urge you to visit. First, go to opendoorsusa.org, you'll find resources to help you and your church observe this international day of prayer for the persecuted church.  Then there's the Voice of the Persecuted.
Finally, to those who are suffering for their faith, I leave you with the words of Joshua: "Be strong and courageous. Do not be afraid . . .for the Lord your God will be with you wherever you go."
Originally published at Breakpoint.org - reposted with permission.