Will The Millennial Generation Push Us To Socialism? 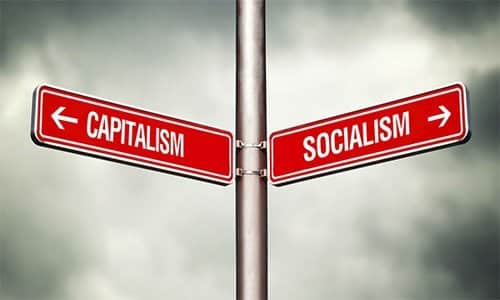 By PNW Staff November 13, 2017
Share this article:
The political landscape is changing, and one of the reasons for the change is the shifting viewpoints of millennials throughout the country. Part of the shift is toward socialism, which is a dangerous adjustment being made by a number of people in the younger generations.
According to The Daily Wire, fully one half of millennials surveyed in a recent poll would prefer socialism or communism to the current capitalist system the US has in place.
But 71% of those same millennials struggled when asked precisely to define communism which would also explain the double-digit support for former Communist leaders Lenin, Stalin and Mao.

Millennials clearly want a change, which may not be a bad thing. When it comes to the wealth divide, Americans seem to be on the same page, with 80% overall saying it’s a serious issue but Millennials may be very misinformed about what type of change would be good for them and for the future of the country.
Market Watch also reported on the study, and pointed out that millennials are now the largest generation in the US today. This generation will strongly influence future policy as they become older and take over the reins of power.
However, if every parent did what Donald Trump Jr jokingly tweeted on Halloween night the next generation may not look so favorably to socialism.
Donald Trump Jr. while out with his young daughter for Halloween tweeted: "I’m going to take half of Chloe’s candy tonight & give it to some kid who sat at home. It’s never too early to teach her about socialism".
While there are good and bad things about every country and their philosophy of government, socialism is a dangerous ideology of taking from one group of people and giving to another group. A large number of millennials feel that socialism will help everyone be more successful; a means of helping others. But it is deceptive at its core and had always led to serious problems for every country that has tried it.

For hundreds of years, it has failed everywhere it’s been adopted. The collapse of the Soviet Union in 1989 was an unequivocal demonstration of the moral and economic superiority of capitalism. The misery caused by socialism is unfolding today in Venezuela.
Since Venezuela embraced socialism in 1999, poverty, crime and corruption have all increased. Grocery shelves are empty and the annual inflation rate is estimated to be as high as 200 percent.  Venezuela is now on the brink of economic collapse.
When people are hungry and unhappy, the state cannot survive if the people know others are better off so the state uses propaganda, misinformation, and censorship to make an already captive citizenry even more confused and submissive - just look at North Korea.
Many millennials are seduced by the offer of free stuff, however they are often not told that true socialism is the collective ownership (i.e., a state monopoly) of the means of production. It calls for the abolition of private ownership of factors of production.
Wages and profits are two parts of the same pie, and socialism says the profit slice should be zero.. just like Donald Trump Jr's example of Halloween candy.  Everyone gets an equal amount regardless of the work invested.

There are no property rights under socialism. Goods and services are distributed by force through political means. Everything you possess is subject to confiscation and redistribution.  Is that really the civilization we want to live in?
By carefully considering what is really demanded under a socialist or communist government, millennials would see that these options are far less secure and free than the capitalist, democratic society in which they already live.
They need to see this issue clearly, because the changes they are working to make and the movement toward socialism on which they are focused is putting their livelihood, and the future of their country at risk.