The Controversial "Christ at the Checkpoint": A Beginner's Factual Guide 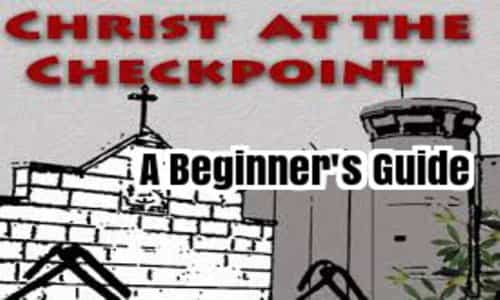 With the fourth biannual Christ at the Checkpoint (CATC) conference about to take place in the Biblical town of Bethlehem (March 7-10), the stormy past of this evangelical Christian gathering is returning to the media. The conferences have been hotly debated in Christian,Jewish, Messianic and Israeli circles. They are scrutinized by watchdog organizations like Gatestone Institute, CAMERA and NGO Monitor. They are also defended by global groups like the Lausanne Movement and World Vision.

For those wondering what the fuss is about, here are some of the hot issues.

First is the politically charged name, chosen by the conference initiators at Bethlehem Bible College (BBC), an evangelical institution serving Christians in the areas ruled by the Palestinian Authority (PA). The Checkpoint refers to the Israeli security gates that monitor people passing through the barrier separating modern Bethlehem from southern Jerusalem.  This barrier, built by Israel in 2003 to stop the frequent terror attacks coming from PA-ruled areas, has been confirmed by terrorists themselves as successful. However, the residents of Bethlehem, a once-Christian town which is now 85% Muslim, publicly object to the barrier as unnecessary and humiliating. They also portray it as a wall completely surrounding and imprisoning their city  another controversy. Although this map from the human-rights organization Btselem shows the barrier running only along the north and west sides of Bethlehem, BBC spokesmen have repeated the surrounded fallacy, as did CATC speaker Bethlehem Mayor Vera Baboun (skip to time-mark 7:00).

Why is Christ at an Israeli checkpoint? It relates to the challenge on the CATC conference home page: What would Christ say and do if he were to stand in front of a checkpoint today? The CATC message is that if Jesus were to return to His birthplace today, he would be suffering from the barrier. Ironically, its true: like all other Jews, Jesus would be forbidden by the PA from making his home in the ancient City of David. Instead, CATC presents Jesus as suffering under Israeli security checks despite many other walls and restrictive checkpoints in many places around the world.

This is part of what the CATC conference calls the Palestinian narrative. Israeli-born CATC leaders like Yohanna Katanacho and Salim Munayer call themselves Palestinian rather than Arab Israelis. This narrative says that Israel is occupying the Palestinian homeland, an unbearable situation that must be reversed. That homeland is jointly defined by Fatah (which rules the West Bank), and by Hamas (which rules Gaza), as extending from the Jordan River to the Mediterranean Sea, which explains why the PLO was founded to liberate Palestinethree years before Israel entered the West Bank. The narrative also blames Israels occupation for all violence between Israelis and Palestinians  and even for Palestinians abusing other Palestinians. After Israel ended the occupation of Gaza, Hamas began using its citizens as human shields, even listing this practice in an official policy manual. As these abuses reached new heights in 2014, the Bethlehem Bible College responded by denouncing  Israel for its disregard of civilian life and for placing Gaza under siege, quoting the CATC Manifesto: For Palestinian Christians, the [Israeli] occupation is the core issue of the conflict.

CATCs stated goal is to challenge Evangelicals to take responsibility to help resolve the conflicts in Israel/Palestine by engaging with the teaching of Jesus on the Kingdom of God.This responsibility includes renouncing Christian support for Zionism (the Jewish goal of reviving their ancient nation). CATC says this support causes injustice.  The Conference proclaims support of Israels right to exist, but only if Israel acknowledges Palestinian claims to the land. Christians are told that its a theological error to justify Jewish ownership of any part of Israel based on Bible promises.

What about those promises made to Israel, some of which say forever?  CATC reinterprets them via a new theology of the land (presented at the 2010 CATC conference by Salim Munayer). This theology teaches that the blessing of the Promised Land has been stretched over the whole earth; God has gifted every people with a homeland, on condition that they behave morally. The Jews behaved immorally and lost their land to the Palestinians. If the Jewish people will become moral, God will let them share the land with the Palestinians. Munayer admitted that both sides have failed to live up to the biblical standards of how to treat the other living among you, one of the qualifications for residing on the land, but he still awarded permanent land-rights to a nation whose government insists on a Jew-free Palestine.

To offset Palestinian injustices, Munayer charged that Zionism has actively pursued a policy of excluding non-Jews from the national, social, and political life in Israel. While discrimination sometimes occurs, this statement denies the 1.6 million Arab Israelis who (like Salim himself) live, travel freely and attend universities in Israel. Some hold positions inthe Knesset, the Supreme Court, and even the IDF. Also absent from the CATC narrative is any mention of Israeli Jews and Arabs uniting to save lives and relieve the suffering of Syrian refugees. Israelis who dont know Messiah are fulfilling His command to love their enemies, including those trying to murder them.

CATC seeks to end the occupation non-violently, and its manifesto condemns all forms of violence. But although CATC leader Sami Awad preached on non-violence in 2012, he proclaimed elsewhere that peaceful resistance is not a substitute for the armed struggle declared by the PA against Israel.

The CATC manifesto also condemns anti-Semitism and delegitimizing of Israel. But British vicar Stephen Sizer, an organizer and speaker at CATC 2010 and 2012, is notorious for publishing information and attending gatherings which many consider anti-Semitic. The Kairos Document, which accuses Israel of practicing apartheid and calls the world to boycott the nation, is also endorsed by CATCs organizers.

This years conference theme of The Gospel in the Face of Religious Extremism features a Christian brand which most expect will be identified as Christian Zionism. In the past, CATC speakers blamed the Hamas murder of Gaza Christians on those Christians in the West [who] support an occupation seen as evil. In other words, if Western Christians do not force Israel to surrender more land (Gaza was de-occupied in 2005), these Christians  not Hamas  will be responsible for the deaths of more Palestinian Christians. In fact, in 2013 CATC leader Alex Awad went so far as to declare: I am afraid of all radicals, whether Christians, Jews, or Muslims&. But I am far more afraid of Christian fundamentalists than I am of Hamas.

Many will be watching this years conference to see how that comparison develops.

Posted with permission from kehilanews.com