Obama Administration: UN Resolution To Divide Israel Is Back In Play 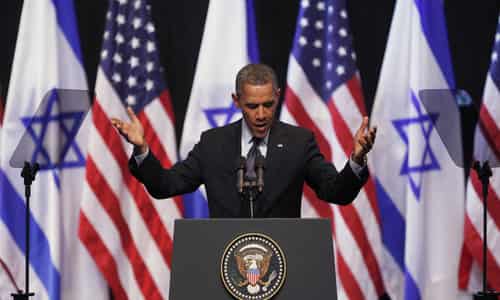 By Michael Snyder - End Of The American Dream Blog March 09, 2016
Share this article:
According to the Wall Street Journal, the White House is considering drastic measures to reboot the Israeli-Palestinian peace process.  Among those measures is a UN Security Council resolution that would set the parameters for a two state solution and that would recognize East Jerusalem as the official capital of a Palestinian state.

If Barack Obama makes this move, it will almost certainly be before the election in November.  I had previously reported that France was ready to introduce a similar UN Security Council resolution back in September, but at that time the French backed off because they did not have full support from the Obama administration. But now that Obama is approaching the end of his term, he suddenly seems more willing to make a bold move.
Remember, this is not just some Internet rumor.  This comes directly from an article that was just published in the Wall Street Journal that claims to have top White House officials as the source of this information.  According to those anonymous officials, the Obama administration is now ready to potentially move forward with the kind of UN Security Council resolution that I mentioned above...
The strongest element on the list of options under consideration would be U.S. support for a Security Council resolution calling on both sides to compromise on key issues, something Israel had opposed and Washington has repeatedly vetoed in the past.
The article goes on to say that the parameters of an agreement for a two state solution would be based on the 1949 armistice line but would allow for land swaps so that many Jewish settlements that have been built since 1967 would not be swallowed up by the new Palestinian state.
The Palestinians would be required to recognize Israel as a Jewish state, and East Jerusalem would receive full UN Security Council recognition as the capital of a new Palestinian state.  This is something that Israeli Prime Minister Benjamin Netanyahu has promised that he would never agree to.
But Barack Obama appears to be completely fed up with Netanyahu at this point, and that is why the White House is now strongly considering moving forward with a UN Security Council resolution.  Needless to say, this would represent a dramatic change in policy from previous administrations.  Here is more from the Wall Street Journal...
Mounting a push for a Security Council resolution would be a significant shift in U.S. policy and one the Israeli government has feared could marshal international sentiment in a way that could make it harder to resist making concessions. Such a move could further strain already tense relations between Messrs. Obama and Netanyahu, who have clashed over U.S. diplomacy with Iran and the administrations past attempts to forge a Middle East peace agreement.
Last year, the White House threatened to allow action at the U.N. to proceed without objection from the U.S. after Mr. Netanyahu said during his re-election campaign that he wouldnt support a two-state solution. The Israeli leader subsequently walked back his statement, and the White House didnt follow through with its threat.
Right now, 136 nations already formally recognize a Palestinian state.  But a Palestinian state has never had full UN Security Council recognition because the United States has always blocked efforts in that direction.
Many people dont realize this, but if Obama throws his support behind such a resolution, it would be considered binding upon both the Israelis and the Palestinians.  The following comes from Israel National News...
A Security Council resolution would be binding upon all parties, unlike General Assembly measures which are non-obligatory recommendations. Such a resolution would remain in force even after the president leaves office next January, effectively shaping the future of American policy in the region for Mr. Obamas successors.
The resolution would require Israel cease construction over the Green Line and would force Israel to recognize eastern Jerusalem as the capital of Palestine.
Needless to say, Israeli Prime Minister Benjamin Netanyahu would be absolutely furious if the Obama administration pushes forward with a UN Security Council resolution that would attempt to dictate a solution to the Israelis and the Palestinians.

Perhaps this explains why Netanyahu just cancelled a meeting with Barack Obama at the White House later this month...
Israeli Prime Minister Benjamin Netanyahu has declined an offer to meet President Barack Obama at the White House later this month and canceled his trip to Washington, the White House said on Monday, citing Israeli news reports.
Netanyahus decision to nix his U.S. visit marked the latest episode in a fraught relationship with Obama that has yet to recover from their deep differences over last years U.S.-led international nuclear deal with Iran, Israels arch-foe.
Of course there are lots of reasons why Netanyahu would potentially be upset with Obama.  In addition to the ridiculously bad Iran deal, we should also remember that Obama tried to help defeat Netanyahu during the last Israeli election, and the Wall Street Journal has reported that the Obama administration has been actively spying on Netanyahu and other Israeli leaders.
Barack Obama has stabbed Israel in the back over and over again, and so it would be absolutely no surprise if he decided to push for a UN Security Council resolution that would permanently divide the land of Israel and the city of Jerusalem.
Unfortunately, such a move would have very serious implications for all of us.  By dividing the land of Israel and the city of Jerusalem, Obama would be cursing our nation, and that is not something that any of us should want.
If Obama is going to do this, it will almost certainly happen before the election in November.
That means that we are looking at roughly an eight month time period.
Personally, because of how the UN schedule works, I would say that the most likely time for such a resolution to be introduced would be in September or October.  But it is definitely possible that it could come sooner than that.
For a long time, Barack Obama has expressed a desire to see the establishment of a Palestinian state before he leaves office.  Netanyahu has always been his nemesis in this regard, but now Obama seems determined to try to make something happen at the United Nations while he still has the power to do so.
Let us pray that he is not successful.