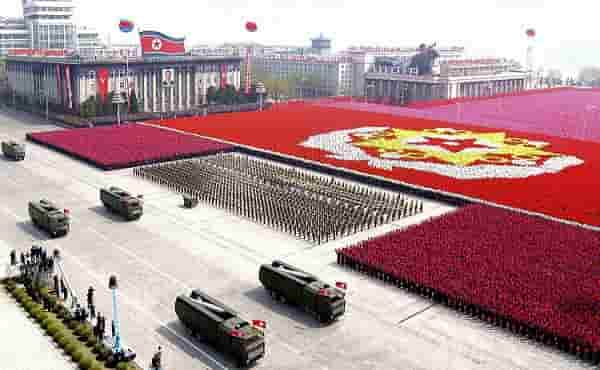 By Michael Snyder - End Of The American Dream Blog March 15, 2016
Share this article:
On Sunday, North Korea warned the United States that it could wipe out Manhattan with a single hydrogen bomb, and earlier this month North Korea threatened to make a "preemptive and offensive nuclear strike" on the United States in response to aggressive military exercises currently being jointly conducted by South Korea and the U.S. military.

So does nuclear war with North Korea actually pose a significant security risk to this country?  Well, according to the Washington Post the entire west coast of the United States is within reach of North Koreas intercontinental ballistic missiles.  The only question is whether or not North Koreas ultra-paranoid leader Kim Jong Un would ever actually press the button.
Most Americans don't realize this, but nuclear war with North Korea is now closer than it has ever been before.  In the past, North Korea's technical capabilities were greatly limited, but now all of that has apparently changed.  Just consider what has taken place within just the past few months.  The following comes from a timeline that was put together by the Arms Control Association...
January 6, 2016: North Korea announces it conducted a fourth nuclear weapons test, claiming to have detonated a hydrogen bomb for the first time. Monitoring stations from the Comprehensive Nuclear Test Ban Treaty Organization detect the seismic activity from the test. The type of device tested remains unclear, although experts doubt it was of a hydrogen bomb based on seismic evidence.
February 7, 2016: North Korea launches a long-range ballistic missile carrying what it has said is an earth observation satellite in defiance of United Nations sanctions barring it from using ballistic missile technology, drawing strong international condemnation from other governments which believe it will advance North Koreas military ballistic missile capabilities.
March 2, 2016: The UN Security Council unanimously adopts Resolution 2270 condemning the nuclear test and launch of early 2016, and demanding that North Korea not conduct further tests and immediately suspend all activities related to its ballistic missile program. Resolution 2270 expands existing sanctions on North Korea by adding to the list of sanctioned individuals and entities, introducing new financial sanctions, and banning states from supplying aviation fuel and other specified minerals to North Korea. Resolution 2270 also introduces a requirement that UN member states inspect all cargo in transit to or from North Korea for illicit goods and arms.
In response to these moves, South Korea and the U.S. military have launched the largest military exercises in the history of South Korea. More than 300,000 troops have gathered to simulate an invasion of North Korea and practice the elimination of North Koreas weapons of mass destruction.  These military exercises being held over a period of eight weeks, and this is precisely what caused North Korea to threaten us with a "preemptive and offensive nuclear strike".
And on Sunday, North Korea boasted that they could reduce Manhattan to ashes with a single hydrogen bomb...
"Our hydrogen bomb is much bigger than the one developed by the Soviet Union," DPRK Today, a state-run outlet, reported Sunday. DPRK stands for the Democratic Peoples Republic of Korea, North Koreas official name.
"If this H-bomb were to be mounted on an intercontinental ballistic missile and fall on Manhattan in New York City, all the people there would be killed immediately and the city would burn down to ashes," the report said, citing a nuclear scientist named Cho Hyong Il.
I don't know about you, but I find statements such as these to be quite alarming.
Earlier this month, Kim Jong Un put his nuclear weapons on alert "for use at any time", and Reuters is reporting that he has just ordered his military to conduct even more nuclear weapon tests.

So why is there so little concern about this in the United States?
Sometimes it is the enemy that you underestimate the most that ends up being your greatest threat.
Meanwhile, in the midst of everything else, a North Korean submarine "has gone missing"...
The North Korean regime lost contact with one of its submarines earlier this week, three U.S. officials familiar with the latest information told CNN.
The U.S. military had been observing the submarine operate off North Koreas east coast when the vessel stopped, and U.S. spy satellites, aircraft and ships have been secretly watching for days as the North Korean navy searched for the missing sub.
The U.S. is unsure if the missing vessel is adrift under the sea or whether it has sunk, the officials said, but believes it suffered some type of failure during an exercise.
At a time when tensions on the Korean peninsula are near an all-time high, this is a very disturbing development.  The last thing that we need is some sort of "trigger event" that could cause the North Koreans to want to start pressing buttons.
Most Americans don't realize this, but hatred for America is one of the centerpieces of North Korean society.  In fact, they have an entire month each year during which they celebrate how much they hate us.  The following comes form a New York Post article that was published last June...
June is something like Hate America Month in North Korea.
Officially, its called "Struggle Against U.S. Imperialism Month" and  more so than usual  its a time for North Koreans to swarm to war museums, mobilize for gatherings denouncing the evils of the United States and join in a general, nationwide whipping up of anti-American sentiment.
The culmination this year came Thursday  the 65th anniversary of the outbreak of the Korean War  with a 100,000-strong rally in Pyongyang's Kim Il Sung Stadium.
If Manhattan actually was reduced to a pile of ashes by a hydrogen bomb, there would be dancing in the streets of Pyongyang.
So let us not underestimate the threat that North Korea poses.  They hate us enough to want to completely destroy us, they now have the technological capability of hitting major west coast cities with nukes, and they have an ultra-paranoid young leader with his hand on the trigger.  Meanwhile, we have an increasingly aggressive leader of our own sitting in the White House that seems to like to yank Kim Jong Uns chain.
If push came to shove, North Korea would attempt to hit American targets with nukes.
Let us just hope and pray that it does not happen any time soon.