Reformation Theology Waning As Many Protestants Believe More Like Catholics 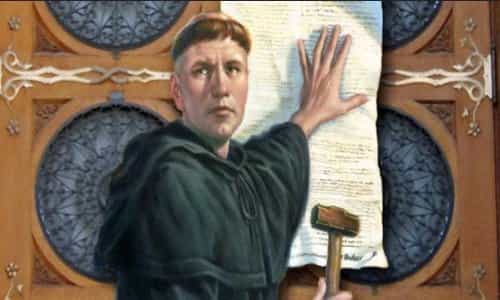 By PNW Staff January 02, 2018
Share this article:
Martin Luther began the Protestant Reformation 500 years ago in October of 1517 with the nailing of 95 theses to the door of the All Saints Church in Wittenberg, Germany. He also wrote to his bishop, Albrecht von Brandenburg to question the sale of indulgences, and for his protest he was excommunicated.
Since that time, Protestants and Catholics have found themselves enemies in countless conflicts, religious wars and fierce nationalistic struggles throughout the Western world.
But two new surveys from the Pew Research Center show signs that this is changing as the beliefs of the majority of protestants have reverted toward Catholic doctrine once again.

The Pew Center conducted telephone interviews with 24,599 Christians across 15 European countries between April and August of 2017 and with 5,198 panelists in the United States between May and August.
The Pew studies examined the two questions of faith central to the Protestant Reformation: sola fide and sola scriptura. Sola fide is the belief that Christians are granted salvation through faith alone and represents a break with the Catholic Church's position that salvation requires a combination of faith and good works.
Sola scriptura is the Protestant doctrine that the Bible represents an infallible totality of all one needs to know about God's will for man on Earth which contrasts with the Catholic belief that Church tradition and official edicts should also be followed.
Protestants taught that a person can reach Heaven by God's grace alone, through faith alone, in Jesus Christ's perfect merits alone, based on what is written in the Bible alone; whereas Rome added to the requirements of salvation numerous traditions, such as praying to Mary and dead saints, repeating the rosary, confessing sins to priests, performing works of penance, paying money to release one's dead relatives from the flames of purgatory and, above all, belief in the supreme authority of "the Pope" as the successor of St. Peter as the universal head of Christianity.
Rome also added the practice of selling "indulgences" which was a payment to the Catholic Church that purchased an exemption from punishment for some types of sins.

"Yes, these traditions aren't mentioned in the Bible specifically," popes and priests admitted, "but they come from the Holy Spirit working through God's Church." "Sorry," countered Protestants, "we don't buy it. We'll stick with Scripture, not man-made teaching."
In the 1500s, these issues divided Christendom.
Since these two elements of doctrine represent a central point of schism between the Catholic Church and all the Protestant denominations that were to follow, it would stand to reason that Protestants should be in wide agreement today that man is saved by faith alone and that the Bible is the lone and absolute authority for God's will on Earth.
But that is no longer the case. The results of the survey, though not uniform between Western Europe and the United States, show a narrowing between Protestant and Catholic beliefs as expressed by thousands of practicing Christians.
In the United States, 52% of Protestants responded that they can enter Heaven through both good deeds and faith (the Catholic position), contradicting the reformation doctrine of sola fide that approximately 46% of US Protestants hold.

Just under half of US protestants also hold with the Protestant doctrine of sola scriptura with again 52% saying that Christians need to live their lives according to church tradition and the guidance of Rome, the Catholic position.
The Pew Center's survey is even more startling in that a mere 30% of Protestants believe in both sola fide and sola scriptura, putting 70% of the Protestant population much closer to the Catholic position on two key aspects of Christian doctrine.
Among US Protestants, there were some divisions along racial lines with 67% of white Evangelicals holding a belief in sola fide whereas only 37% of white mainline Protestants and 29% of black Protestants are in agreement.
Although there have been many attempts in recent years to find common ground between the two groups, the fact is that the differences remain, and they are just as important today as they were at the beginning of the Protestant Reformation.
Some Christian scholars argue that the Catholic Church has a direct role to play in regards to "Mystery Babylon" found in the Book of Revelation.  Others argue Islam is more fitting for this title.  Discover the arguments for and against such positions with the new DVD available in our store -  Mystery Babylon - Mecca or Rome?