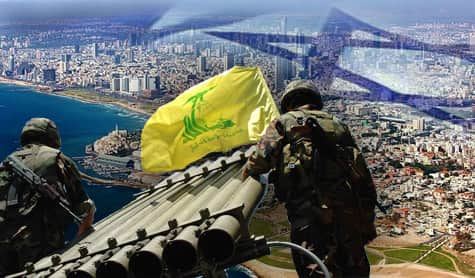 By Yaakov Lappin/JNS.org February 05, 2018
Share this article:
Tensions between Israel and Hezbollah-Iran have risen sharply this week, following the discovery of an Iranian program to set up weapons factories on Lebanese soil, for the manufacture of missile guidance systems.
Such guidance systems can be placed on Hezbollah's arsenal of rockets and missiles, and turn inaccurate projectiles into precision-strike weapons, capabilities that were once reserved for the great powers. It would allow the Shi'a armed organization to target strategically sensitive targets deep in Israel, and cross a red line drawn by Israel over how far its enemies can build up their military capabilities.
These developments have led to a flurry of Israeli warnings in recent days, as part of a diplomatic attempt make Iran and its Hezbollah client desist from their activities. Israeli officials have made it clear that if their warnings will go unheeded, military action will become likely.

"There is no doubt this is a new stage in the attempts by Iran, to build independent capabilities to build advanced missiles systems in Syria and Lebanon," Dr. Ely Karmon, a senior scholar at the International Institute for Counter-Terrorism in Herzliya, Israel, told JNS.
The weapons factories in Syria are likely under direct Iranian control "and those in Lebanon under Hezbollah control," Karmon said.
By building weapons factories in Lebanon and Syria, Iran can kill two birds with one stone, Karmon argued. It can arm its proxies with advanced weapons, and cut out the need for ground transportation of the weapons, across routes that have proven vulnerable to Israeli detection and repeated alleged Israeli air strikes.
Israel has made no secret of its determination to disrupt the Iranian arms trafficking network. So far, it's campaign to do so in Syria has succeeded in dodging a wider conflict. Military strikes in Lebanon, however, could change all of that. Hezbollah has warned in the past that it would respond to such attacks differently from its muted responses to alleged Israeli strikes in Syria.
Still, Iran has a clear incentive to take such risks. The factories make Iran's proxies even more powerful, Karmon said, while limiting the "liberty of the decision making of the two legitimate governments [in Lebanon and Syria]."

Israel's response in recent days has been urgent, and unusual. The spokesman of the Israel Defense Forces (IDF), Brig.-Gen. Ronen Manelis, took the rare step of writing a letter directly to the Lebanese people, and publishing it on Lebanese opposition websites, warning of dire consequences if work on the factories continued. Manelis said the entire future of Lebanon and the region is being jeopardized by "the takeover of those who take their orders from Tehran."
"The most severe things are hidden from view. Lebanon is actually turning, due to the failure of the Lebanese authorities and the turning of a blind eye by many members of the international community, into one large missile factory," Manelis wrote. "Iran opened a new de facto branch in Lebanon. Iran is here."
He described Lebanon a powder keg, which could blow up at any time due to Iran's conduct.
"Will Lebanon and the world community allow Iran and Hezbollah to take advantage of the naivety of the heads of the Lebanese state, and set up a factory for accurate missiles, as they are trying to do so these days?" he asked. "The IDF is prepared for all scenarios."
Days later, Prime Minister Benjamin Netanyahu and the commander of the IDF Military Intelligence Directorate, Maj.-Gen. Herzi Halevi, flew to Russia to meet with President Vladimir Putin.
It is believed that during their meeting, Netanyahu warned Putin what Israel would do if Russia's partners, Iran and Hezbollah, continued building the factories.
Defense Minister Avigdor Lieberman has, for his part, been issuing a steady stream of warnings about events in Lebanon, adding that if residents of Tel Aviv are forced to sit in air raid shelters, "all of Beirut will sit in shelters."

He added, however, that the threat could be stopped "not just with bombs. We are activating all of the diplomatic levers, and other levers, to prevent the production of missiles. The last thing I want is to go into a third Lebanese war... we are taking advantage of all options. What I can stress is that we are determined to stop Lebanon from turning into one big factory for the production of accurate missiles."
Maj.-Gen. (res.) Yaakov Amidror, Netanyahu's former national security advisor, told JNS that Israel's warnings have a dual purpose.
They represent an attempt by Jerusalem to deal with the threat without resorting to military force, and at the same time, they help create needed legitimacy for military action, in case diplomacy fails. The warnings achieve "both" of these objectives, Amidror said.
Karmon said it was far from clear whether these warnings will be effective.
"Israel will have to respond, either by pressing Russia and the U.S. to stop this adventurous Iranian move, or directly by attacking it, including if necessary in Lebanon, which was until now not in Israeli plans to attack preventively," he said.
"I think the threats by Israeli politicians and military to attack and destroy Lebanese infrastructure in order to deter Iran are not sufficient - and counterproductive in relation to Israel's standing in the international arena - as the Iranians, like the Syrians before them, will fight to the last Lebanese. Therefore, Israel should threaten Tehran directly," Karmon, stated.
"It should be remembered that the decision of [former Iranian Supreme Leader] Ayatollah Khomeini to accept the end of the eight- years Iraq-Iran war in 1988 came only after a wave of deadly missile bombings of Iran's capital."
In addition, Karmon said, a recent Kremlin delegation visit to Israel could create an "opening for a strategic dialogue between the two countries at the highest level, but the question is how much the Russians are willing to deliver on the Iranian file."
Originally published at JNS.org - reposted with permission.