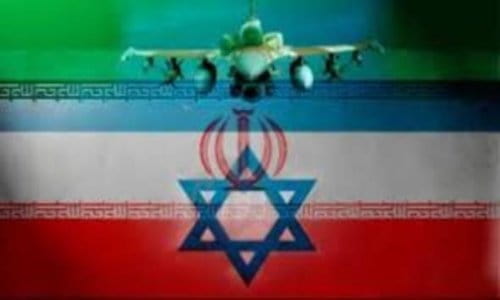 By Yaakov Lappin/JNS.org February 12, 2018
Share this article:
In the early hours Saturday morning, Israel and a Syrian-Iranian alliance became engaged in a confrontation that left an Israeli F16 destroyed, in addition to the downing of an Iranian-made drone, and numerous military targets within Syria destroyed.
While the shooting down of the Israeli fighter jet was an accomplishment widely touted by Israel's enemies, the destruction of significant Syrian air defense systems appear to leave Syria and it's Iranian backers in a much weaker position to defend against future Israeli air raids.
Speaking to reporters on a conference call, IDF Spokesman Lt. Col. Jonathan Conricus provided a clear breakdown of the confrontation's events.  An Iranian 'stealth' drone, modeled on the American RQ-170 drone, took off from the T4 airbase in central Syria, located deep in the Syrian desert near Palmyra.
According to the IDF, this airbase has been taken over by the Iranian Quds Force-an elite overseas unit, used by Tehran to spread its dangerous influence across the Middle East.
The Quds Force has been highly active in Syria, helping the regime of embattled Syrian President Bashar Assad to defeat rebel forces.  Iran has been working to build missile factories in Syria, to produce weapons able to target Israeli cities.  The Quds Force uses the T4 airbase to launch Iranian-made drones.
Before sunrise on Saturday, Iran sent a drone south towards Syria's border with Jordan.  From its launch, the Israeli Air Force (IAF) was monitoring the drone's flight path.  IAF controllers watched as the drone entered Jordanian air space, and then tried to sneakily enter Israeli air space from Jordan--as opposed to from Syria--in an attempt to circumvent Israeli defenses.

The drone flew for a minute and a half over Israel, before an IAF Apache combat helicopter shot it out of the sky at 4:25am.  The IDF recovered the pieces and brought them back for analysis--providing an opportunity for Israel to study Iranian drone technology.
Next, the IAF tracked the location of the Iranian caravan where a crew was controlling the drone, hundreds of kilometers away from Israel in the central Syrian desert.
Just over an hour after the drone's interception, at 5:34am, eight Israeli jets took off on a mission to destroy the caravan, as well as additional Iranian military targets in Syria.  Hovering over northern Israel, the jets fired long-range missiles, striking and destroying their targets.
Syrian forces, controlled by the Assad regime, then entered the confrontation firing between 15 and 20 surface to air missiles at the Israeli jets.  One of the Israeli F16's was unable to defend itself against the attack, and was damaged in-flight, forcing the pilot and navigator to eject the aircraft, before the plane crashed down in northern Israel.
The pilot suffered serious injuries, and the navigator suffered light wounds.  Following successful surgeries and blood transfusions, the pilot's condition was upgraded from serious to moderate.  Both are expected to make a recovery.
At 8:45am, Israel responded to the downed F16.  The IAF scrambled a second wave of fighter jets into the air, and 12 targets across Syria were hit.  Syrian forces again fired on Israeli jets, but none were hit.
During the reprisal, Israel destroyed eight Syrian air defense sites, destroying a significant portion of the Syrian regime's air defense systems.  Another four significant Iranian military targets were hit.
"We carried out a wide-scale attack on the aerial defense system: radars, missiles, batteries, and posts," Amnon Ein Dar, head of the Training and Doctrine Division in the IAF said in a statement.
The number of casualties suffered by Syria or Iranian Quds forces remains unknown.  Iran and Syria are attempting to play down the scope of damage that they sustained, while celebrating the downing of the Israeli F16 as a major military accomplishment.
The IDF is investigating the incident to determine exactly why the F16 was unable to avoid enemy fire, leading to its crash.
Origainally published at JNS.org - reposted with permission.