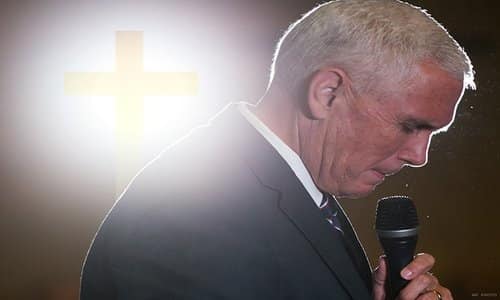 By Michael Brown/AskDrBrown.org February 21, 2018
Share this article:
According to everything I know, Vice President Mike Pence is not a religious fanatic. Rather, he is like millions of other Americans: a God-fearing, Bible-believing Christian.
Yet large segments of our population have become so anti-Christian (and even anti-God) that a committed believer like Pence is now vilified as a religious nutcase.

Put another way, the darkness has become so dark that a normal light seems blinding. Deception and false religion have spread so widely that the simple truth seems threatening.
Pence's Morality
One day the Vice President is being "roundly ridiculed" when it is "revealed that he makes an effort never to be alone with a woman who is not his wife."
The next day it's Joy Behar from the View TV show mocking Pence as if he were mentally ill, saying, "It's one thing to talk to Jesus. It's another thing when Jesus talks to you."
The next day it's Gus Kenworthy, a gay Winter Olympian, tweeting, "Broke my thumb yesterday in practice. It won't stop me from competing (obvi) but it does prevent me from shaking Pence's hand so... Silver linings!"
And remember: Pence's sexual morality guidelines are hardly extreme. In no way can he be called a spiritual mystic. And his views on homosexuality are mainstream in terms of the Church's teaching for the last 2,000 years.
Yet he is mocked and ridiculed and reviled as a dangerous, bigoted extremist. How far America has fallen.
Other 'Religious Fanatics'
Interestingly, last year, Rev. Billy Graham was voted one of the most popular men in America for a remarkable 61st time, coming in fourth behind former President Obama, President Trump, and Pope Francis. So, on some level, there is still some respect for religious leaders in America.

Yet the words of Graham's son, Rev. Franklin Graham, spoken in honor of his father, would be viewed with abhorrence by the likes of Behar and Kenworthy.
As Franklin Graham said, "My father has been faithful to God's Word. He believes the Bible to be the inspired Word of God. He believes in Heaven and Hell, and preached repentance from sin and that people must put their faith in Jesus Christ who took our sins to the cross, died in our place, and then God raised to life."
Hell? Repentance from sin? Franklin Graham is a religious fanatic!
The Compromised Church
But the sorry spiritual state of America is not primarily the fault of people like Behar and Kenworthy. Instead, the bulk of the responsibility falls at the feet of the compromised Church of the nation.
In short, rather than us changing the world the world has changed us. Rather than us impacting the society, the society has impacted us. Rather than us raising the standards of the nation, we have embraced the standards of the nation.
And so, while there are millions of people professing the faith of Mike Pence with their lips, many are not living their faith out. And that, rather than the extremism of his beliefs and convictions, is our real problem. The nation is very sick, but the Church is offering a diluted cure because we ourselves are compromised and carnal.

The words of Chinese Christian leader Watchman Nee (1903-1972) still apply today: "By the time the average Christian gets his temperature up to normal, everybody thinks he has a fever."
Or, as expressed by Leonard Ravenhill (1907-1994), "The Church has been subnormal for so long, that when it finally becomes normal, everyone thinks it's abnormal."
Precisely so.
Help us champion truth, freedom, limited government and human dignity. Support The Stream »
Just a few days ago, former White House employee Omarosa Manigault Newman joined the hate fest against Vice President Pence, saying, "As bad as y'all think Trump is, you would be worried about Pence."
Yes, she explained, "So everybody that's wishing for impeachment, might want to reconsider their life. We would be begging for days of Trump back if Pence became president, that's all I'm saying."
The irony is that what America needs more anything is the faith of Mike Pence and the God of Mike Pence. We mock and ridicule to our own lasting loss.
Originally published at AskDrBrown.org - reposted with permission.