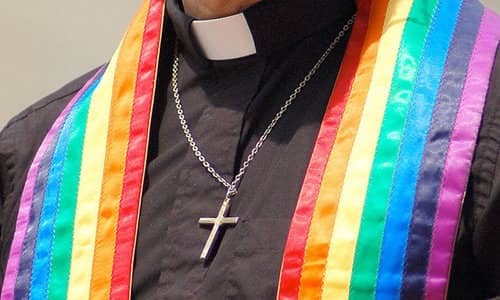 By PNW Staff February 23, 2018
Share this article:
Starting on February 11th, 2017, the congregation of St. Matthew Trinity Lutheran Church in Hoboken, New Jersey began referring to their pastor as Peter. Peter, formerly Rose Beeson, was the center of a renaming ceremony Sunday that was led by Bishop Tracie Bartholomew of the Evangelical Lutheran Church in America (ELCA). The ceremony also coincided with the celebration known as Transfiguration Day for Lutherans.
The Bishop anointed the transgender pastor with water from the baptismal fountain during the ceremony. A public statement on the church's website reads, "Today, we are creating a sacred space that allows our pastor to live more fully into who God is calling him [her] to be. We take a bold step in witnessing to the inclusiveness of God's love for those within our church and society. Bless Peter with grace as he [she] takes this new name!".

The ceremony, according to witnesses, was conducted in the same style as a christening or baptismal ceremony with the bishop blessing Beeson and pronouncing her newly-chosen name.
Some compared the renaming ceremony to what God had done with Abraham and Peter, a comparison that Beeson and her church would undoubtedly be quick to support. Voices in the liberal media, such as the Huffington Post, were quick to lend their support to such a radical expression of gender fluidity. But a closer study of the examples of Abraham and Peter reveal stark differences with Beeson's case.
God commanded the change in Abraham's name from Abram to Abraham and his new name meant "father of many" or "father of a multitude". The name was God-given and an important symbol of God's purpose for Abraham as the foundation of a nation. Likewise, his wife Sarai became Sarah, "mother of nations."
The same can be seen for the Apostle Peter, whom Jesus changed from Simon. Peter would be the rock on which Jesus built the Church and his name was an emblem of that mission in the world. It is something else altogether to compare the change of Rose Beeson to Peter Beeson. Rose Beeson's desire to change her name stems not from any incredible, divine calling but simply her own impulse to swap genders.

An ex-member of the ELCA and currently a seminary student, Dan Skogen has openly disagreed with the direction that the church has taken. He maintains the website, Exposing ELCA, and on it he wrote about this latest incident, "You cannot change your sex. You cannot change your gender. Those are facts. Trying to do so goes against God's will for you and is a sin against God. It is also a sin to encourage sinful behavior. The ELCA is guilty of this. They do this regarding homosexuality and transgenderism."
Pastor Beeson told NJ.com in an interview, "I wrestled with sex and gender from my teens into my early 20s." She went on to say that her life and career are now on "a journey toward greater integrity to be full present for the congregation and honest and authentic and live what God is calling me to be."
Despite the many liberal voices who have congratulated Beeson on her decision, John Ellis of PJ Media responded to this claim of 'authenticity' by reminding us that God created her as a woman. "Rose is using words like 'honest' and 'authentic' in dishonest and inauthentic ways. Sadly, with her dishonest and inauthentic sinful lifestyle, Rose has misled her congregation."

Suffice it to say, there is no Biblical support for transgenderism. In fact, it is Deuteronomy 22:5 that tells us that "the woman shall not wear that which pertains unto a man, neither shall a man put on a woman's garment, for all that do so are abomination unto the Lord thy God."
Sadly, St. Matthew Trinity Lutheran Church seems likely to continue to cherry pick examples of name changes from the Bible to justify its apostasy.
Alas, a Rose, by any other name--smells.