Did The Beast Of Revelation & Whore Of Babylon Meet Over Jerusalem? 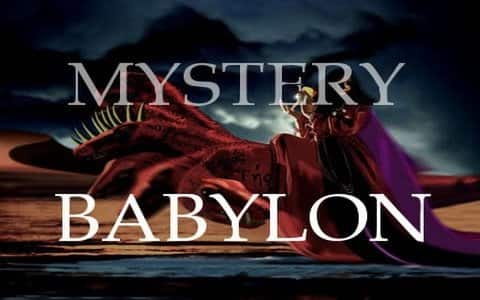 By Bill Salus/Prophecy Depot March 01, 2018
Share this article:
Paying the first Vatican visit by a Turkish head of state in 59 years, President Recep Tayyip Erdogan met with Pope Francis on February 5, 2018. These two prominent world leaders met to discuss several sensitive geo-political issues, which included at the top of their list, the current and future status of Jerusalem.
Mentioned by seventy different names over one-thousand times in the Bible, this holy city is central to Islam, Catholicism (Christianity) and Judaism. President Donald Trump's decision on December 6, 2017, to acknowledge Jerusalem as Israel's capital sent shock waves throughout both the Muslim and Catholic communities.

Representing nearly three-billion followers between them, these two dominant world religions are apparently uniting together against President Trump's controversial Jerusalem decision. Does this developing alliance between Turkey and the Vatican have potential biblical ramifications? According to New York Times bestselling author Joel Richardson, "It very well may."
In his book entitled, Mideast Beast: The Scriptural Case for an Islamic Antichrist, Richardson presents the strong case for an Islamic Antichrist that arises out of Turkey. Recently, Richardson collaborated with Bill Salus, another noted prophecy expert, to produce a truly historic DVD that takes an in-depth prophetic look at the futures of Islam and Roman Catholicism.
Bill Salus takes the position that the Catholic Church will fulfill the role of the coming global religion of the last days. Salus argues that Rome is the "great city" of Mystery Babylon mentioned in the book of Revelation.
And the woman whom you saw is that great city which reigns over the kings of the earth." (Revelation 17:18)
According to both Richardson and Salus, the Bible clearly predicts the formation of an unholy alliance between the coming charismatic leader called the "Beast" and the future global religion referred to as,
"MYSTERY, BABYLON THE GREAT, THE MOTHER OF HARLOTS AND OF THE ABOMINATIONS OF THE EARTH." (Revelation 17:5)
Both authors are concerned that the mystery of Babylon is about to become the religious reality thrust upon the world, and that the final status of Jerusalem may play a key role in this process.
In addition to aligning itself with the Antichrist, the coming Harlot world religion will;
• Rule over many nations, (Rev. 17:15)
• Be headquartered in a great city, (Rev. 17:18)
• Be a city located upon 7 hills, (Rev. 17:9)
• Pander to world political leaders, (Rev. 17:2)
• Become the religious Opiate of the masses, (Rev. 17:2)
• Martyr true believers in Christ, (Rev. 17:6)
• Eventually be hated by the "Ten Kings," (Rev. 17:16)
• Be desolated by those ten political leaders, (Rev. 17:16)
• Be replaced by the Antichrist's global system. (Rev. 17:17)
In their DVD entitled, "The Identity of Mystery Babylon: Mecca or Rome?" Richardson and Salus debate which city best meets the description of these prophetic details. Among the five primary candidate cities, which include Jerusalem, New York City and a rebuilt Babylon in Iraq, Joel and Bill narrow it down to the two most likely cities of Mecca or Rome.
Salus disagrees with the Islamic Antichrist and Harlot theories presented by Richardson, which makes for a lively and educational three-hour discussion.

According to Joel Richardson, Islam with its 1.8 billion followers is the most logical candidate to become the dominant world religion of the last days. However, Salus reasons that "Allah is about to lose his Akbar," which means his claims of being the greatest god. Salus points out that approximately 600 to 700 million Muslims could soon be killed, captured or exiled as the result of two major prophetic wars.
Psalm 83 and Ezekiel 38 are unfulfilled biblical predictions that deal with epic Middle East battles. Psalm 83 includes an "inner circle" of Muslim countries that share common borders with Israel. In this new Mystery Babylon DVD, Salus explains how these countries are defeated by the Israeli Defense Forces. He claims that the IDF victory over the inner circle of Arab countries and related terrorist groups, "Is a punch to the gut of Islam." 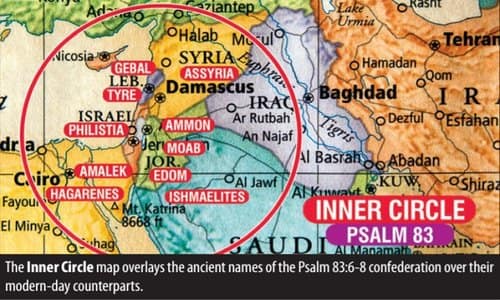 Moreover, Salus believes that the "outer ring" of mostly Muslim countries listed in Ezekiel 38:1-6, will be decimated supernaturally through an earthquake, flooding rain, great hailstones, fire, and brimstone in Ezekiel 38:19-22. He suggests, "This will serve as an upper cut to the jaw of Islam." He concludes with, "As a result of these two wars, Islam will be knocked down to the canvas for the ten-count during the final seven-year Tribulational Period." 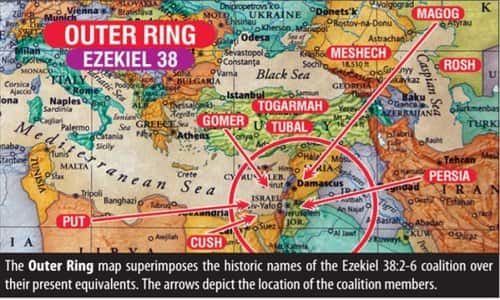 If these two wars happen sequentially in the manner described above, then how can Islam become the dominant world religion of the future. Salus asks the question, "In the aftermath of these two enormous blows to Islam, won't Muslims begin to doubt the power of their god and subsequently abandon their faith?"
Already, an unprecedented number of Muslims each year are abandoning Islam in favor of Christianity. Estimates are in the millions according to a November 17, 2017, article in the National Catholic Register called, "Muslims Are Converting to Christianity in Record Numbers."
The article points out that the primary reasons for these conversions include how, "terrorizing people has ended up with people becoming more disgusted with Islam," and that, "a large number of Muslims are receiving visions of Jesus."

Conversely, Joel Richardson has an entirely different end times scenario in mind. He believes that Ezekiel 38 does not find a final fulfillment prior to the Tribulational Period, rather he believes the prophecy happens in two distinct phases.
The first phase is the massive invasion of Israel that occurs sometime during the first three and one-half years of the Tribulational Period. The second phase is when the invaders are supernaturally destroyed, but he believes this happens at the Second Coming of Christ, which occurs approximately three and one-half years later at the time of Armageddon.
Furthermore, he finds some serious flaws in the Salus teachings of Psalm 83 as expressed in their new DVD and in a prior WND article entitled, Which nations does Psalm 83 really include?
In the end analysis, these two-top notch biblical researchers can't both be right about the true identity of Mystery Babylon because the apostle Peter points out;
"Knowing this first, that no prophecy of Scripture is of any private interpretation, for prophecy never came by the will of man, but holy men of God spoke as they were moved by the Holy Spirit." (2 Peter 1:20-21).
Therefore, which of the two theories is correct? Or, are they both incorrect?
In our continued attempt to be fair and balanced, PNW invites you to discover for yourselves, which of these two scholars presents the best and most thorough arguments on this intriguing topic.
Click HERE to purchase the new DVD entitled, "The Identity of Mystery Babylon, Mecca or Rome?" - On Sale Now!