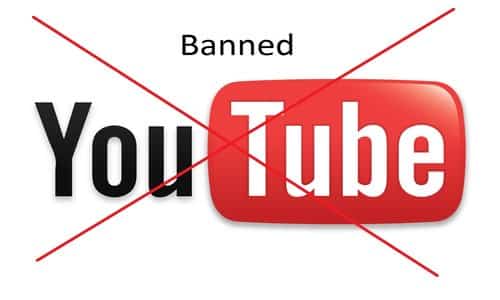 By Tom Olago March 23, 2016
Share this article:
It is emerging that Christian videos about the persecution of Christians as well as other themes that are not 'politically correct' are being heavily censored and pulled down from major video and social media sites.

Katherine Weber for the Christian Post recently reported that Christian filmmakers are questioning why a newly-released short film on persecution in the Middle East was banned from YouTube.
The creators behind "Chased" have spoken out against the video sharing platform's decision to remove its 33-minute movie, which claimed it violated "Community Guidelines" for having "inappropriate" content.
The film follows the fictional story of Anneliese, a young Christian girl living in the U.S. whose family is subjected to persecution for their Christian faith. As the film's website states, the movie seeks to shed light on what life would be like for Christians in the U.S. if they were forced to endure the same persecution experienced currently by Christians in the Middle East.
"For many, the reality of persecution is an abstract concept. While it may be uncomfortable to imagine a society without religious freedom, it is an all too personal truth for the 100 million Christians who struggle to express their faith in religiously repressed areas," the website states.
Emily Weaver, the writer behind the film, told The Blaze in an earlier interview this week that she and the film's other creators are trying to get answers as to why their movie was removed. Yet as Sharona Schwartz reported for theblaze.com, the movie included no nudity, profanity or explicit onscreen violence.
The Chased movie crew and several other Christian filmmakers have agreed that YouTube takes part in shadowbanning, or a method of banning spammers or content they deem unsuitable for the site.
Josh Troester, the Springfield, Missouri-based director and producer of "Chased," told The Blaze that he read the video-sharing site's Community Guidelines and "determined that there must have been a mistake, as our movie did not violate any of their Community Guidelines".
"The process allows for one appeal if you believe there has been a mistake. I appealed through their process stating that the movie was written to paint a picture of what persecution would look like in our own backyard, Troester said.
After a few hours, he got this email from YouTube: "After further review of the content, we've determined that your video does violate our Community Guidelines and have upheld our original decision."
"YouTube's decision to censor this movie from its public site is confusing, disheartening, and in our opinion, inconsistent considering there are clearly multiple (potentially thousands of) pieces of content on their site that could easily be considered in violation of their Community Guidelines," Troester said.
Other Christian movies have over the past years found themselves on the receiving end of such strange and ambiguous vetting processes.
In a 2013 incident, YouTube and Facebook temporarily banned Christian actor Kirk Cameron's movie "Unstoppable" due to the websites' "policy against spam, scams and commercially deceptive content."
The movie, starring Cameron and created in conjunction with Liberty University, follows the main character as he seeks to answer the question, "Why does God let bad things happen to good people?"
The bans on Facebook and YouTube were eventually lifted after Cameron started an online protest campaign for full reinstatement. Michael Kirkland, communications manager for Facebook, explained to The Christian Post at the time that Cameron's movie had been blocked due to a mistake with the company's spam software program.
Equally disturbing is that double standards seem to be applied, punishing the expression of innocuous and informative views based on the Christian faith while allowing much more violent, immoral and extremist videos from non-Christian persuasions. These are usually reflected through entertainment industry giants such as Hollywood, or through belligerent jihadist videos that seem to enjoy a lot more 'Community Guideline' leniency despite being rife with incitement to violence and murder.
Sharona Schwartz also reported in her blaze.com account that other video producers working to educate the West about violence and incitement in the Middle East have experienced YouTube removing their videos or shutting down their channels, including the Middle East Media Research Institute (MEMRI) and Palestinian Media Watch. Both groups translate the Arabic-language videos of jihadist leaders and others as an educational service.
Ironically, MEMRI staffers in 2010 met with senior executives of YouTube's parent company Google to help them identify videos that incite to violence and terrorism after the research organization determined that YouTube had "emerged as the leading website for online jihad. It has replaced - and surpassed - websites administered by jihadis themselves, which were previously the leaders in online jihadi efforts."
Perhaps little or nothing has changed since that meeting if developments reported since are anything to go by. Matt Wanderman for Israelnationalnews.com recently reported that YouTube has restored Palestinian Media Watch's (PMW) account, just one day after it was frozen after being 'terminated' for exposing a Palestinian Authority video calling for attacks on Israelis.
PMW says that the account was "terminated" after it shared a video of an official Palestinian Authority broadcast featuring a young girl demanding "vengeance and liberation" and calling to "smash the oppressor."
This video supposedly violated YouTube's terms of service, even though PMW was merely exposing the incitement and not supporting it. Many of PMW's followers contacted YouTube and its parent company, Google, to appeal the block and their appeals seem to have succeeded.
Wanderman observed that the cycle of PMW revealing Palestinian incitement and hypocrisy, and then being temporarily frozen, has happened multiple times.
In 2010 the organization published a video of the Palestinian Authority's senior religious leader, Mufti Muhammad Hussein, declaring that it is a religious imperative to murder Jews. Soon after, the YouTube account was banned from uploading new content for two weeks.
Bob Unruh of wnd.com narrated the account of a Christian ministry's YouTube channel, which was suspended permanently through an unsigned notice from the division of Google. The channel was reinstated two days later after WND inquired about the action.
WND specifically questioned what was offensive in the interview by Jan Markell of Olive Tree Ministries with Tom Doyle about his book, "Killing Christians: Living the Faith Where it's Not Safe to Believe."

Markell also expressed concern that the organization was notified only of a second "strike"  essentially a complaint about one of its videos  on a Saturday morning. That warned of a two-week suspension of all activities on YouTube. Then only hours later came the notification of the third "strike," and the permanent ban.
This third "strike" was prompted by her weekend interview with Doyle, where she referenced how some of the contemporary terror and violence is occurring in the same region where Assyrians, two millennia ago, did the same.
Doyle noted how those who hate Christianity, specifically Jesus, are influential there and in North Korea, too.  "What this really is is a war on Jesus," he said. "This is evil regimes wanting to eradicate anything about Jesus on planet Earth. There is persecution wherever people name the name of Jesus."
He noted how Iraq at one point promised to eradicate Christianity, but now is the scene of one of the fastest-growing per capita branches of the Christian church. They also agreed that persecution of Christians is "coming to America."
The program that triggered the YouTube action, Markell explained, simply talked about Christian persecution in the Middle East and how Christians are overcoming. It's just a fact that Muslims are the persecutors, she pointed out.
The first warning several weeks ago from YouTube came when her program addressed Harry Potter during a program about the paranormal.
It is also clear that the impact of shutting down video channels also has a devastating effect on the lives of the impacted channel owners. Michael Thompson for wnd.com wrote that for Pastor Carl Gallups, one of the people behind the popular PPSimmons YouTube Ministry, seeing a channel disabled he has worked tirelessly to build and promote since 2009 was devastating.
"It was as if you have a thriving business and you came to work one day and the building was burnt down and everything you had created was gone. Instantly," he told WND.
Gallups, whose "The Magic Man in the Sky: Effectively Defending the Christian Faith," will be released May 15, was one of the original founders of the PPSimmons Ministry on YouTube. He had been involved with producing and recording more than 530 videos.
The PPSimmons site was known for producing videos on biblical commentary, startling biblical revelations and, perhaps most controversially, political revelations concerning Barack Obama and his birth certificate.
The PPSimmons Ministry Channel was in excellent standing with YouTube before it was pulled last week, according to Gallups. Of more than 530 videos released over a three-year time span, with a number of them having more than a million views, only three had come to the attention of YouTube and been "flagged" for potentially inappropriate content.
One such video was on abortion and it was flagged by YouTube for being too graphic before it was eventually restored to a "Good Standing" rating with YouTube.
Ironically the video that YouTube flagged and used to closed down the PPSimmons channel was titled "A Call to Prayer" and remains on Gallups' site.
"It was a simple video, in my voice, urging our subscribers to pray for YouTube users who were asking for our prayers and because of spiritual battles that they were experiencing in their life," said Gallups.
Gallup decried the double standard and discriminatory nature of the vetting processes. He noted that one can see videos on YouTube that attack Christianity, demonize and bully proponents of traditional marriage and call Muslims to prayer, "but to make a video calling for Christians to pray is ostensibly grounds for having your channel terminated."