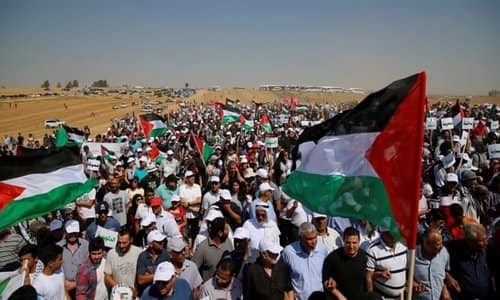 By Yoni Ben Menachem/JNS.org March 29, 2018
Share this article:
Hamas has adopted a new method of fighting Israel by using civilians in the same way it did during Operation Protective Edge in 2014 -- as human shields.
The "Return March" planned for Friday is a cynical exploitation of Palestinian refugees and a publicity stunt that has no political benefit.
The refugee problem can only be solved through diplomatic means by a body representing the Palestinians that recognizes Israel's right to exist -- not through a terrorist organization that wants to destroy it.

Even if Hamas makes a huge media impact with its march, within a few weeks it will disappear into a cloud of oblivion.
The military wing of Hamas began a "defense exercise" on March 25 in the Gaza Strip. Sources in Gaza say it is a show of strength in preparation for the large "Return March," which is supposed to take place between Land Day on March 30 and Nakba Day on May 15.
According to these sources, the exercise sends a double message. On the one hand, it is a message to residents of Gaza wanting to participate in the march that there is someone who will defend them from the Israel Defense Forces.
On the other hand, it is a deterrent message to the IDF that harming the marchers will lead to a security escalation. This war could then spread to the borders with the State of Israel, and not be confined only to the Gaza Strip.
The march of a mass of Palestinians towards the border with Israel is not a Palestinian invention. It was first invented by Hezbollah, who tried it on Israel's northern borders on Nakba Day on May 15, 2011.
During that six-hour event, several hundred young Palestinian men and women tried to cross the Lebanese and Syrian borders with Israel. The IDF soldiers at the border were taken by surprise and compelled to open fire. As a result, 10 demonstrators were killed and another 100 were injured.
Now, Hamas is attempting to replicate Hezbollah's exercise and turn this into an event that will last several weeks. Its basic premise is that the large media presence on the Palestinian side will provide enough protection for the Palestinian marchers to overcome the "fear barrier," approach the border fence with Israel, and try to cross it.

In Hamas' estimation, IDF soldiers will act with great caution and won't use live ammunition due to the media presence among the marchers.
No country in the world would agree to tens of thousands of demonstrators, accompanied by various kinds of media, infiltrating their borders and trying to get into their territory. Hamas is making cynical use of Palestinian refugees living in the Gaza Strip as cannon fodder against the IDF, who have to protect the border fence and cannot allow infiltration.
According to a report by the Quds Press news agency on March 7, one of the activists involved in the media campaign for the return march is Zaher al-Birawi. He is an activist affiliated with the Muslim Brotherhood and Hamas, who also bears the title "liaison for the international committee for breaking the embargo on the Gaza Strip." In the past, he held a key position among the organizers of marches and flotillas to Gaza.
The planned "Return March" is similar to the incident of the Mavi Marmara flotilla in 2010, which was organized by Turkey and the Muslim Brotherhood.
Fatah sources in Gaza report that Hamas is encouraging residents to go to the area of the border with Israel and take part in marches toward the fence. Several Hamas activists have even promised payment for participating in these activities.
According to these sources, Hamas is interested in provoking an escalation that will lead to many casualties on the Palestinian side in order to place the Palestinian issue firmly on the top of the world agenda.
The avowed purpose of the "grand return march" is to show that the Palestinians have not given up on the "right of return" for Palestinian refugees or "houses and property" as defined by UN Resolution 194.

The organizers claim that the Palestinian initiative was provoked by US President Donald Trump's cuts to UNRWA's budget and reports that the current US administration will recommend in a final status agreement that refugees will settle in the places where they currently live -- in other Arab countries.
Even if Hamas succeeds in attracting the attention of the world's media by fomenting an escalation at the border with Gaza, it is clear that this move will have no political benefit.
According to Palestinian data, there are around seven million Palestinian refugees around the world. Israel will not destroy its own national identity by absorbing the Palestinians within its boundaries as they demand, changing Israel's demographic map.
Their problem needs to be solved with the cooperation of the international community. Tens of thousands of Palestinian refugees marching to the Gaza border will not solve the problem. If anything, it will only frighten the Israel public and discourage any attempt to resolve the refugee issue.
The Hamas march actually disregards the fate of Palestinian refugees. Hamas does not have any real ability to get them across the border into Israeli territory. The IDF will prevent this, and even if a few individuals do manage to cross the border, they will either be injured or arrested.
How long can thousands of Palestinian residents live in tents close to the border fence without proper infrastructure or food? In the end, will they understand that Hamas is using them for its own political purposes?
Conditions in the West Bank and Gaza Strip, coupled with the regional and international situation, are not currently conducive to finding a solution to the Palestinian refugee problem, and neither marches nor parades will help.
It's a shame about all the blood that may be spilled. It's an irresponsible move by a terror organization that has no scruples about using the residents of Gaza as "human shields" during a time of war, as it did during Operation Protective Edge in 2014.
Hamas is trying to adopt a new strategy of using civilians to fight against Israel. It calls it a "non-violent popular struggle," similar to Mahmoud Abbas' strategy in the West Bank, which he refers to as "popular, peaceful resistance."
Both of these strategies are bound to fail and they have no bearing on a solution for the problems of the Palestinian people.
Originally published at JNS.org - reposted with permission.