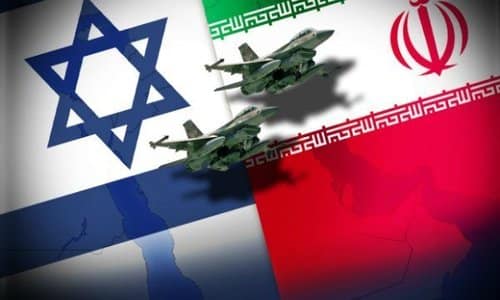 By Yaakov Lappin/JNS.org April 10, 2018
Share this article:
The recent missile strike on a military airbase deep in the central Syrian desert looks like the latest installment in a long-standing Israeli campaign to police its red lines against highly dangerous developments to its north.
Usually, such strikes are driven by incoming intelligence of threatening activity underway in Syria--activity that breaches Jerusalem's ban on Iran from constructing military bases in Syria, from setting up weapons factories there and from using Syria as a transit zone for the trafficking of advanced arms to Hezbollah in Lebanon.

Iran is keen to cash in on its heavy investment and bloody involvement on behalf of the survival of Syrian President Bashar Assad's regime. That means attempting to expand the Iranian military presence on Syrian soil. Israel is determined to stop this at all costs.
By chance or not, the strike also comes amid fallout from the Syrian government's use of chemical weapons against rebel-held areas over the weekend, leading to warnings from President Donald Trump of likely military strikes in retaliation.
Nevertheless, the precise reason that triggered the latest strike remains unknown and can probably only be found in classified intelligence reports.
What is clear, however, is that over the past several years, Israel has reportedly carried out a series of strikes targeting the Iranian-led axis in Syria. If left unchecked, Iran would flood Syria with Shi'a militia groups and terrorist organizations, arm them with rockets and missiles, and set up terrorist cells. It would convert southern Syria into a new launch pad for attacks against Israel.
Iran's Quds Force, the elite overseas unit, and Hezbollah use Syria to manufacture and smuggle precision-guided ballistic missiles, heavy rockets, advanced surface-to-air missiles and surface-to-sea missiles. Israel has reportedly disrupted these activities on a regular basis.
Lebanon is already a well-established Iranian rocket base, filled to the brim with  120,000 rockets embedded in 200 Shi'a Lebanese villages. All of these projectiles are pointed at Israel. Under Iran's plans, Syria, too, would become a major threat.

The military base reportedly struck in the latest attack, known as "T4," has a history. In early February, Israeli fighter jets destroyed an Iranian drone control cabin that was stationed there, after Iranian operators sitting in it flew a drone into Israeli airspace. It's likely that the Iranian operators were killed in that attack.
According to reports that emerged on Monday, Iranian military personnel were killed in Monday's strike as well. That would seem to indicate that whatever was going on at the T4 airbase--hundreds of kilometers from the Israeli border--constituted a serious security threat to Israel, and that Iran has again tested the waters, seeing how far it can go in building up its military presence before provoking an Israeli response.
This dangerous pattern looks set to continue. Each incident represents a potential escalation point that can spiral into a wider conflict between Israel and the radical Shi'a axis that is taking over much of the Middle East.
The Russian Complication
What makes this situation more tense is the fact that Russia acts as the air force of the Shi'a axis in Syria. Russian airpower helped turn the tide of the war in Assad's favor, a fact that has probably given the Syrian dictator the confidence to unleash the horrors of chemical warfare on Sunni areas and make a mockery of the international community in the process.
Russia has, through its waves of airstrikes in Syria, gained a warm-water port at Syria's Tartus naval base, and it has an airbase at Hmeimim on the Syrian coastline. It has moved advanced air-defense batteries to Syria. Moscow has used its intervention to position itself as a superpower actor in the Middle East. Meanwhile, the United States has decreased its influence in Syria to a bare minimum.
Israel seeks no conflict with Russia, but is unwilling to ignore the activities of Moscow's allies--something Israel has communicated to Russia repeatedly.

The Russians have so far been able to help de-escalate the situation by convincing their radical and dubious allies to tone down their responses to Israel's self-defense actions. The Iranian axis may not have needed much convincing; it remains fundamentally deterred by Israel's vast firepower and intelligence capabilities.
Iran is keen on consolidating its control of Syria at this stage, rather than opening a new active front against Israel right now, which would risk its entire Syrian project. But if it succeeds in its goal of converting Syria into a new base of hostility towards Israel, there can be no doubt that sooner or later, it would activate this front.
**Sponsored Link**
In a competing market consumers are looking to find the best bluetooth turntable.  Several reviews are available from the Gadget Nerds to help you find the best deal online.
These events put Russia's project in Syria at risk, and this poses a complication. Any full-scale conflict that erupts would place the Assad regime in existential threat, and Russia could see its investment go down the drain.
Statements released by Moscow on Monday indicate Russian displeasure at Israel's alleged actions.
Yet Israel has responded that it will not blink when it comes to defending its security.
It's also hard to ignore the fact that the alleged Israeli strike came hours after a horrendous chemical massacre was carried out, once again, by the Assad regime against a rebel-held area.
Scenes of men, women and children murdered through the use chemical-weapons agents have once again flooded the world, with an ally of Iran and Russia--the Assad regime--again committing a ghastly crime against humanity.
As a result, it cannot be ruled out that the latest attack also served as an Israeli signal of intolerance to the usage of chemical weapons in the region.
Whatever triggered the strike, one thing seems certain: Iran will continue to test Israel's lines, and Israel will continue to enforce them.
Originally published at JNS.org - reposted with permission.