Who's In Over Their Heads In Syria? 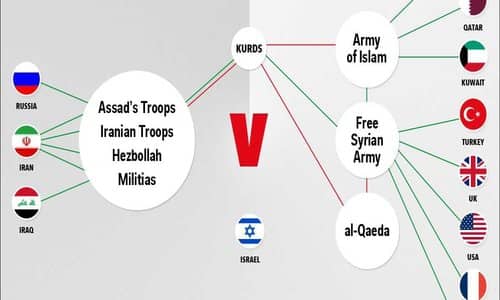 By Jonathan S. Tobin/JNS.org April 13, 2018
Share this article:
The key question about Syria this week is not why the various foreign powers involved in the civil war there are on the brink of hostilities. It's how hostile forces with very different agendas co-existing in a relatively small country have been able to avoid a violent confrontation up until now.
The answer has been that for all of the potential for conflict that exists between the various parties involved, it has not been in the interests of any of the major powers for the mess in Syria to become a test of wills, in which one of them will have to back down in order to prevent an escalation that nobody wants.

Yet in the aftermath of the latest use of chemical weapons by the regime of Syrian President Bashar Assad, the kind of confrontation that has always been possible might be about to happen.
Israel's strike on an Iranian air base in Syria over the weekend raised the stakes in a conflict where the armed forces of the two countries are no longer separated by vast distances. And with U.S. President Donald Trump not merely threatening the use of force--but in a bizarre heads-up delivered via Twitter actually warning Russia to be prepared for incoming U.S. missiles that Moscow has vowed to shoot down--an unthinkable escalation now must be considered possible.
If this kind of confrontation has been avoided up to now, it's because the United States has been content to let Russia, and its Iranian and Syrian allies, do as it liked. Trump has seemed content to continue President Barack Obama's policy of allowing Moscow free reign in Syria.
That meant largely ignoring the atrocities committed by the Assad regime, as well as the determination of Iran to turn Syria into an armed base from which it can threaten Israel.
Indeed, when Trump vowed last week to pull American troops out of Syria once the fight against ISIS was finished, it appeared to leave Israel on its own against an Iranian foe entrenched on its northern border, with little option but to hope that Russian President Vladimir Putin would not let things get out of hand.
Yet the latest chemical attack by Assad might have been the moment when Trump finally realized what everyone else has known all along: If horrible things are happening in Syria, it's because Russia has let them happen--and the United States hasn't been willing to do anything about it.

Given his desire for a new détente with Russia, there was a great deal of continuity between Trump's policies in Syria and those of Obama's. To his credit, Trump is so offended by Assad's atrocities that he has finally started to connect the dots between the use of chemical weapons there and the Russians.
In doing so, the president is going to have to resolve the glaring contradiction between his appropriately tough attitude towards Iran, and his reluctance to speak ill about Putin and Russia.
Concern about the way Trump approached the issue this week is warranted. Boasting about launching missiles and daring the Russians to do something about it is risky business, especially since both countries have troops in Syria that are essentially hostages to fortune. This isn't the moment to start World War III.
Yet it would be just as dangerous if, as was the case with his "too cool for school" predecessor, Trump allowed himself to be talked into inaction regarding Syria. If Iran is allowed to turn that country, with Russian approval, into a base to launch a war against Israel, it will destabilize the entire region with equally unknowable consequences.
Moreover, even though the Russians and Iranians have won Assad's civil war for him, as long as that butcher remains in power in Damascus, Syria will never be at peace.

What is needed is a measured effort to make it clear to Putin that the United States needs him to clean up his act in Syria. With the help of his new national-security team, Trump should formulate a rational response to a terrible situation that the United States clearly needs to address.
A few missiles intended to punish Assad won't do the trick. Instead, the United States should be using its economic power to punish both Russia and Iran in ways that will hurt their fragile economies. Trump must also forget about withdrawing U.S. troops from Syria, and instead signal that the days of assuming that America is a declining power in the Middle East are over.
At the very least, Iran must be shown the exit door as a price for America acquiescing to Russia in retaining its presence in that country.
**Sponsored Link**
No more switching batteries with the best solar watches money can buy.  Several websites offer knock offs but for authentic brands be sure to check out www.thegadgetnerds.com **
Is such a turnabout impossible? Though aggressions by Moscow against its former Soviet possessions, coupled with its dabbling in election interference in the United States, have given it the aura of an unstoppable power, that isn't the case. In terms of its military and its economy, Russia is not a superpower.
Though Putin's sole foreign-policy goals are to reassemble the Soviet empire while undermining U.S. influence wherever possible, his successes have been more a function of Western weakness than Russian strength.
It's time to realize that it is Russia that's in over its head in Syria, not the United States. Putin has unleashed forces there that he can't entirely control and whose goals--like a war against Israel--are not in Russia's interests.
Once we realize that the notion of U.S. helplessness in the face of this crisis should be banished, then it becomes possible to understand that inaction is not the only rational response to this complex problem.
Israel can't go on doing the West's dirty work as it seeks to contain Iran and its Hezbollah auxiliaries in Syria. Though Trump must avoid meaningless or reckless military gestures, it's time for him to start reversing the mistakes the United States has made in the last several years.
If he does, then rather than blowing up the region, he may instead reveal that Putin is the one whose bluff needs to be called if a war is to be averted and future atrocities forestalled.
Originally published at JNS.org - reposted with permission.