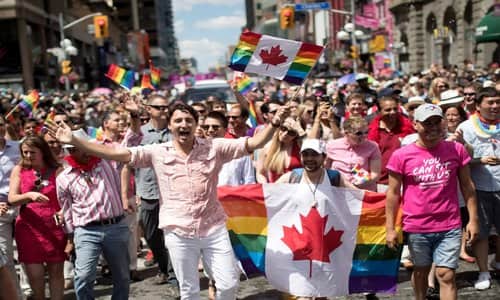 By Jonathon Van Maren/The Bridgehead April 13, 2018
Share this article:
Perhaps you thought that after Trudeau was widely mocked for his "peoplekind" comment, and the Liberal gender budget flopped, and Canadians collectively groaned at the news that their government was going gender-neutral, that perhaps the Liberals realized it was time to lay low on the subject of gender for awhile.
If so, you thought wrong. Consider this latest news update from Trudeau-land, in the National Post:
Over the years, federal environmental assessments have measured everything from the number of endangered lynx near a proposed New Brunswick mine to the presence of dragonflies and butterflies at a British Columbia hydro site. But under new federal legislation tabled in February, the scope of impact assessments is being broadened well beyond fauna, requiring project proponents to take into account "the intersection of sex and gender with other identity factors."

What does that mean, you ask? It turns out that nobody has any idea:
Part of the Liberal government's embrace of gender-based analysis, the new provision has left environmental lawyers puzzled over how the provision will work if the bill becomes law.
"If you're asking, 'What does that mean?' I'm going to have to say I don't really know," said Richard Lindgren, a staff lawyer at the Canadian Environmental Law Association. "I'll wait for the guidance and direction from the government on this one."
In a report on the legislation, the law firm Osler, Hoskin & Harcourt LLP said the new gender provision makes "the role of an impact assessment more of a policy-setting exercise than focused on the merits of a specific project, which is likely to increase the scope of studies the proponents will need to engage in and contribute to overall project uncertainty."
Roughly translated, "contributes to overall project uncertainty" means "this is extremely stupid, counter-productive, and impossible to implement without compromising the work we are actually supposed to do." The Liberals, it seems, are happy to forcibly insert gender into every imaginable field, regardless of how inconvenient or ridiculous that is. More:

Jessica Kennedy, a lawyer at Osler's Calgary office and co-author of the report, called the initiative "novel." Gender impacts have been considered in the past, for example when looking at employment rates on work sites. But Bill C-69 seems to be suggesting something much larger.
"What is more concerning is if you take the issue of gender and gender identity more broadly and start examining, for example, a company's policies and practices regarding gender, their hiring practices, their bathroom policies, their codes of ethics around treatment of people based on gender or other identity factors -- race religion, those kinds of things," Kennedy said. "That's where it starts to get more into a policy question, where you're really looking at the social setting within the company."
**Sponsored Link**
If you are a fan of star wars and want to find the best star wars gadgets then look no further than The Gadget Nerds for your fan fix of great product at great prices. **
The law firm Dentons similarly flagged the gender language as a source of uncertainty, "since it is not clear how these factors, which are subjective and difficult to assess, will be applied."
Bernie Roth, a lawyer in Dentons' Calgary office, said the meaning of the new language on gender remains unclear, but he speculated it could be a tool to increase gender diversity in male-dominated trades. Patrick McDonald, director of climate and innovation at the Canadian Association of Petroleum Producers, said his industry is awaiting further clarification from the government on the meaning of the change. "There is going to be some learning and some adaptation," he said.

The preamble to the bill, the Impact Assessment Act, declares that the government "is committed to assessing how groups of women, men and gender-diverse people may experience policies, programs and projects and to taking actions that contribute to an inclusive and democratic society."
And here you thought this was about environmental protections and ensuring the survival of endangered species. Not anymore--it's about how a gender-diverse non-binary person experiences Canadian environmental programs--or perhaps how to increase trans representation in "male-dominated trades."
Ladies and gentlemen, your tax dollars at work.
Originally published at The Bridgehead - reposted with permission.