"This Will Be Israel's Most Dangerous May Since 1967" 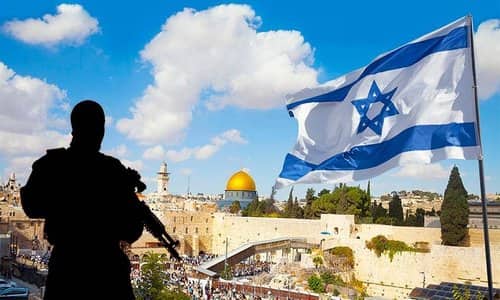 By Benjamin Kerstein/Algemeiner.com April 24, 2018
Share this article:
The former chief of Israel Defense Forces intelligence believes the upcoming month of May could be the most dangerous Israel has faced since before the 1967 Six Day War.
"When I look at the month of May, I say there wasn't a month of May so dangerous since 1967," said Amos Yadlin in an interview with Israeli daily Yedioth Ahronoth.

In May 1967, the security situation in the Middle East began to deteriorate as Egypt expelled UN peacekeepers from Sinai and three Arab nations mobilized their forces along Israel's borders.
Israel eventually launched a preemptive strike in early June and decisively defeated Egypt, Jordan, and Syria.
"In the last Independence Day ceremonies I was reminded of the independence ceremonies of '67," Yadlin said. "The Jerusalem parade, everyone was satisfied, but they didn't pay attention to the beginning of developments that snowballed into the Six Day War."
Yadlin also warned against Israeli complacency and overconfidence. He pointed to Israel's failure to predict the 1973 Yom Kippur War, in which Egypt and Syria caught Israel unaware on its holiest day and inflicted heavy casualties on the Jewish state before being defeated by the IDF.
"When the heads of state talk about Israel as a superpower, it also reminds me of the noises from '73," Yadlin stated. "So let's be more modest, more careful, and understand where we're going."
Yadlin pointed to recent escalations between Israel and Iran in Syria. In February, an Iranian drone infiltrated Israeli airspace. It was later found to be laden with explosives, apparently for a terror attack. Israel retaliated by striking the control center for the drone and Syria's anti-aircraft system.

Last week, Israel reportedly struck a Syrian airfield also used to control Iranian drones. Iran promised strong retaliation for the strike.
Israel has unequivocally stated that it will not permit Iran to entrench itself along it's northern border.
Yadlin related the escalation to a recent statement by a top Iranian military official. "The deputy commander of the Revolutionary Guards said that his army can erase Israel and destroy our airforce, and so the only thing we can all do is escape into the sea," said Yadlin. "From a military point of view he can't threaten the existence of the State of Israel, he can't even harm the air force."
Nonetheless, Yadlin continued, Israel must exercise extreme caution in dealing with Iran.
"A preventive strike doesn't absolutely have to involve the danger of a full-scale confrontation," he said, "and I hope the people who sit in the cabinet room and the intelligence and security services know how to differentiate between when to go for the head of the Iranian snake in places that we can't tolerate Iranian entrenchment in Syria, and on the other hand expelling every last Iranian from Syria. That's an unrealistic and incorrect goal."

Yadlin also noted that the Palestinian "March of Return" along the Gaza border will intensify as the Palestinians mark "Nakba Day" next month, on which they lament their failure to annihilate the nascent State of Israel in 1948.
In addition, President Donald Trump will be making his decision on whether to dump his predecessor's nuclear deal with Iran. This could influence Iran's decision to retaliate against Israel.
"All these things together enter the month of May," Yadlin said. "The Israel-Iran issue and the Iranian retaliation, Trump's decision on the agreement with Iran, and also the Palestinians' 'March of Return' on May 15."
Originally published at Algemeiner.com - reposted with permission.