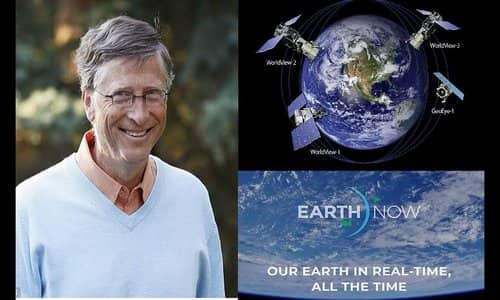 By PNW Staff May 07, 2018
Share this article:
Bill Gates, the billionaire founder of Microsoft, has announced plans to invest in a start-up that is going to provide HD live streaming services of the entire Earth. The start-up in question, EarthNow, plans to do this by launching as many as 500 satellites to record every part of the globe.
Gates is not the only heavyweight to back these plans. Softbank CEO Masayoshi Son, and aircraft maker Airbus are also involved. That gives this project a lot of legitimacy and increases the chances of it being completed successfully.

Experts estimate that this project will cost around $1 billion, but the actual amount these individuals and companies have contributed so far remains undisclosed. This estimate is based largely on the costs of building and launching the 500 satellites, as well as the various permits and licenses involved.
The stated applications for this satellite network include tracking illegal fishing, weather forecasts, as well as keeping track of natural migrations. The live stream will be available to individuals on their phones, as well as scientists. However, the services of EarthNow will be initially available only to large companies and governments.
Though the stated purpose for this project is without a doubt noble, many groups and individuals have raised serious privacy concerns in the wake of these announcements. The main question about this project is what the satellites will actually be able to see, and how far they will be able to zoom.
Right now, it doesn't seem as though individual privacy is in danger from this project. The cameras mounted on these satellites would likely not be able to monitor individual activity on the ground. However, there are even more important concerns than your individual privacy.

Namely, these satellites could be able to see into military bases and other classified sites. It is worth remembering that this satellite network will be in the hands of a private corporation, which is not accountable to the public. They could misuse the network to spy on governments or the business operations of their competitors.
That is why the EarthNow project is being likened to George Orwell's Big Brother, constantly watching over you; ever-present but invisible. The leaders and backers of this project may say that it is for scientific purposes only and that it won't be able to monitor individuals, but who is to say that their technology won't improve to the point that they will be able to track you?
The reader may be reminded of the government surveillance scandal revealed by WikiLeaks some years ago. However, this project has the potential to be even more invasive and problematic. EarthNow is a private company, controlled by its shareholders, which now include Bill Gates and Masayoshi Son.

Inasmuch as this will be a truly global company, it would be hard for any government to rein it in on its own. There would have to be a broad agreement among various countries in order to regulate such a company.
Even more importantly, U.S. adversaries, Russia and China will likely see this as a provocation, which could induce them to collaborate on their own satellite surveillance project, in order to get access to information on U.S. bases and operations.
All in all, even though this project may seem innocuous and even noble, it sets a dangerous precedent in both international and domestic affairs. Private companies should not be given the right to watch over us without any sort of oversight by the people. This message needs to be hammered home at every turn until our representatives finally do something about it.