Christians Fight Back: Beliefs About Sexuality Incompatible With Adoption? 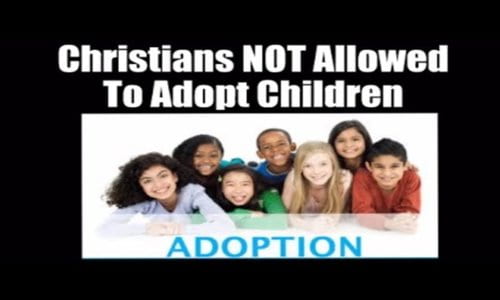 By Jonathon Van Maren/The Bridgehead May 08, 2018
Share this article:
In these often discouraging times, it is especially important to take note when Christians secure legal victories here in Canada.
In March, for example, an Ontario judge excoriated the Children's Aid Society for removing two little girls from the home of loving Christian foster parents because those parents refused to tell their foster-daughters that the Easter Bunny was real.

And this week, an Alberta couple that had been rejected as adoptive parents because they were Christian--and thus would have "problematic" views on homosexuality and transgenderism--have had that decision reversed.
From Christy Blatchford in the National Post:
Throughout the complex process -- which involved an orientation course, a home study, three personal interviews and extensive reference checks -- the couple had made it clear that while they were Evangelical Christians, they would support and love any child regardless.
The husband was adopted himself as a newborn, and the wife said her heart ached for "the older children in foster care that I have met, who I know are unlikely to ever get adopted because of their age. I want to offer kids like these a home and show them that they are valued."
They are unable to conceive because of medical complications.
The mysterious change of mind from Alberta Child and Family Services came quietly in December last year, a month after the Justice Centre for Constitutional Freedoms in Calgary took on the couple's case and lawyer Jay Cameron filed an application in the Alberta Court of Queen's Bench for judicial review of the decision.
He alleged religious discrimination, saying the denial breached the couple's Charter rights to religious freedom, and accused the government of attempting to coerce the couple "to abandon" their deeply held beliefs as a prerequisite to adoption. "This is the essence of religious discrimination," Cameron said.
The Justice Centre announced the victory Wednesday in a press release. It hasn't discontinued the case, president John Carpay said in an email, but rather adjourned it indefinitely.

A spokeswoman for the ministry, Karin Campbell, confirmed in an email the ministry had "rescinded" the earlier decision and said, "Families are not denied adoptions based on religious beliefs..."
If only this were true. As I've noted before, I could relate many stories that Christian couples have told me, where social workers and other government bureaucrats attempt to determine what their beliefs are, and then essentially tell them that these views render them ineligible for foster parenting or becoming adoptive parents--even though there is an enormous shortage of available foster parents at the moment.
Gay couples, on the other hand, are often given precedent over families that could provide children both a mother and a father. More details from Blatchford:
The couple's file was assigned to the Catholic Social Services (CSS) for the home study and background checks. The "CSS practitioner" asked a series of questions about sexuality, including how the couple would handle a child who was questioning their sexuality.
The couple said they'd explain their beliefs and reassure the child of their love. The practitioner asked how they'd handle a child engaged in "sexual exploration" and if they'd encourage it. The wife said while they'd be willing to discuss it, they wouldn't encourage sexual exploration, as they believe sexuality shouldn't be experienced or explored until after marriage.
In February of last year, the practitioner told the couple, who are identified only as C.D. and N.D. in court documents, she was "pleased to recommend" them.
But when the home study report was completed, it said the couple wasn't "accepting of homosexuality" and that this was "a concern that cannot be mitigated."
In March, the couple was told Child and Family Services had further questions regarding their "views about sexuality": How exactly would they support a child questioning their sexuality? What if the child had a gay biological relative?

The wife responded and frankly answered that "Biblical principles are the foundation of our home ... As such, we believe that homosexuality is wrong. We will not treat sexuality as something to be 'discovered or explored'...." And, she said, they believe that "gender and sexuality are determined at birth."
But she also said that she and her husband recognize that "young adults will choose what they wish to choose. Our hope is that by providing a stable, loving home and openly discussing our values (and reasons for them) with our children, they would want to follow our example.
"Ultimately," she wrote, "a parent's love is not, and should not be, given based on the decisions and actions of a child. It's unconditional and filled with grace and mercy..."
That led to even more questions, among them: Does that mean there are two genders (male/female) and one sexual orientation (heterosexual)? Do you believe that people choose to be homosexual or that they choose to act on their homosexuality?
Again, the wife replied for the couple, and said in essence, "our view is that acting on feelings of same-sex attraction is a choice, and thus, homosexuality is a choice."
Later that month, the practitioner called them, telling them "you are a great couple" and "you'd be great parents," but that her supervisors were concerned they might "return" a child if he or she struggled with their sexuality. With tears streaming down her face, the wife said in an affidavit prepared for court, she told the woman "we would never do such a thing... We would never reject a child in our care..."
Later that night, the couple got a rejection letter with the explanation that they "would be unable to help a child who has sexual identity issues." They were crushed and angry that their views had been misinterpreted.
"We accept that same-sex relationships exist," the wife said in the affidavit, "and that same-sex marriage is a legal reality. Further, we accept that other people have different views than ours on this subject, and we respect their freedom to both hold that view and act in accordance with that view. Further still, and most importantly, we have and will continue to treat all same-sex attracted individuals with respect."
But she said, "It seemed as though all our answers to her questions were not the answers she was looking for or were grossly misinterpreted..."
In a final meeting last May, the couple met two staff from Alberta Child and Family Services, an adoptions caseworker and a supervisor.
The supervisor told them their religious beliefs about sexuality were incompatible with the adoption process.
What's more, she told them, this was "the official position of the Alberta government."
In other words, while we should be thankful that this couple has seen the decision reversed, either Karin Campbell was lying when she said that the government does not make eligibility decision based on religious beliefs, or the supervisor was lying when she said that the Christian view of sexuality renders couples ineligible for adoption.
Support for gay marriage is rapidly becoming a litmus test for all sorts of things, not the least of which is the Canada Summer Jobs Program (a news story that has dominated headlines for months.)
Holding Christian views is, in the opinion of progressive tastemakers, an indication of inherent bigotry. Many politicians won't say that out loud and in public yet--although Justin Trudeau, Rachel Notley, and David Eggen certainly get close--but you can rest assured that the day is coming when they will.
Originally published at The Bridgehead - reposted with permission