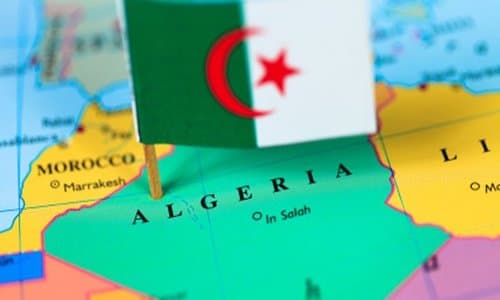 By PNW Staff June 02, 2018
Share this article:
Christians have increasingly become the targets for an authoritarian crackdown by the government of Algeria. A Presidential election is on the horizon and Islamic groups within the country, primarily opposed to the current regime, are gaining ground.
In what is seen as a measure to gain popular support, the government is now beginning vigorously to enforce anti-Christian laws that were passed in 2006. Situated in Northern Africa and now the frequent target of Islamic extremists, Algeria is Africa's largest country by land area and is home to just over 40 million people, 99% of whom are Muslim.

By employing a tactic seen in Iran, Algeria requires that all churches register with the government, pay licensing fees and submit to stringent monitoring and inspections. So-called "house-churches" are considered illegal, as are all churches that do not meet the governments requirement for control.
Ali Khidri, general secretary of the Bible Society in Algeria, revealed recently that "Since November last year, they have been cracking down on the churches. Our churches are all illegal, and that's what they want."
Officials are forcing long-established churches to seek permits for non-Muslim worship and have begun to imprison all those who practice Christianity in now unrecognized churches and homes, all as a way of persecuting Christians through red tape. The punishment for worshipping at home or an unauthorized church? One to three years in prison and a $1,400-$4,000 fine.
More worrisome yet is the 2-5 year prison sentence and 500,000 to 1 million dinar fine (US$4,343 to US$8,687) stipulated for sharing the Christian faith with a Muslim. Written so broadly as to allow police and prosecutors to charge nearly any non-Muslim, the law punishes those who "incite, constrain or use any seductive means aimed at converting a Muslim to another religion," and sets out as a separate charge, "printing or distributing anything that aims to shake the faith of a Muslim."
While this law clearly bans any missionary activities, it can and has been interpreted so broadly as to allow prosecution of normal social interactions between Christians and Muslims. Khidri related to journalists the story of the conviction of a priest who had helped a group of Muslims in need of aid.
Without sharing his faith, without pressing them to convert, he rendered selfless assistance to fellow community members in need, and was sent to jail because, as prosecutors alleged, "His assistance could shake the faith of a Muslim."

In another case, a church leader, 37-year-old pastor Nourdedine Belabed, was stopped while driving and when his car was searched the police uncovered 56 Bibles. A judge applied the anti-Christian laws available and sentenced him to a 10,000 dinar fine ($868 US dollars) for "undermining the faith of a Muslim."
The original sentence was for a two-year jail term as well, but the judge reduced this to a three-month suspended sentence. Belabed and his companion had been called to the city of El-Bayadh by a Muslim who then canceled, and it was on their way back home that they were stopped in what was clearly a set-up.
Meeting the same judge on appeal that had originally passed sentence, Pastor Belabed pleaded to the court, " I did not do anything wrong, judge. The Bibles I carried were intended for members of our community, our Tiaret church, which is affiliated with the EPA. I did not give them to others or try to evangelize anyone."
The judge's response reflected the growing attitude of hostility by Algerian Muslims when he asked Belabed and those convicted with him, "Why do you carry those Christian books; are you not ashamed? Algeria is a Muslim country."
Faced with both ISIS splinter groups and a deepening economic crisis, the embattled Algerian government is becoming increasingly Islamic in response to the pressure, but what about the Christian community? Though difficult to know with any degree of accuracy, the size of the Christian community is estimated to be between 200,000 and 400,000.

Now scapegoated as part of a Western conspiracy against both the nation and Islam, Christians have become the target for persecution, even as many in the Christian community remain active in spreading their faith. Perhaps Algeria is now taking cues from Tunisia and Morocco, both countries that have strictly enforced their anti-Christian laws.
What is more, the 2006 law requiring churches to register mandated that they register with the National Commission of Religious Worship, a government office that never became fully active and simply ignored the churches' applications within the time limit provided.
This left the great majority of the country's churches illegal by default, though only 35 have been closed recently. For the few allowed to operate, they do so under stringent controls with the constant threat of being shut down for miniscule violations.
Algeria is sending a clear message to Christians: openly practice or share your faith and face prison time.