Fathers Day Confusion As Trans Mothers Want to Be Fathers 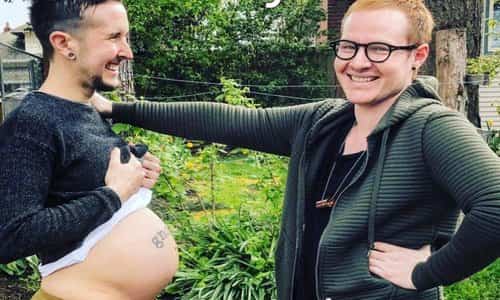 By Michael Brown/Ask Dr Brown June 18,2018
Share this article:
In what might be the most ridiculous Father's Day article ever, CNN recently ran a piece titled, "He gave birth. He breastfed. Now, he wants his son to see him as a man."
As noted by Hank Berrien at the Daily Wire, "Just in time for Father's Day, CNN brings you the story of a biological female who refers to herself as a transgender man who, after taking testosterone to 'transition,' conceived a child with a man who was 'transitioning' into a transgender woman but stopped taking hormones long enough that they could conceive a son."

In case your head is spinning, let's go back to the basics. I mean the biological basics.
Men do not conceive babies. Men father babies.
And men do not carry babies, nor do men give birth to babies, nor do men breastfeed babies.
The one who conceives the baby and carries the baby and gives birth to the baby and nurses the baby is the mother. And the mother will never become the father. Ever.
She can have her breasts removed (as this mother did - and as CNN chose to highlight in a picture). She can take male hormones. She can even have sex-change surgery.
But she will never be her baby's father, no matter what spin CNN or anyone else puts on it.
Surgery Can't Turn Sabastion Into a Daddy
The CNN article, by Kendall Trammell, began with these words: "Like many new dads, Sabastion Sparks knew parenting would come with serious challenges.
"But most new dads didn't give birth to their child. They didn't breastfeed them. And they don't endure glares from strangers when they go shopping with their wife and their toddler son."
What kind of nonsense is this? What kind of flight into pure fantasy? And we are supposed to take this seriously? We are supposed to say, "How touching! What a delightful story!"?
"Sabastion" is not "like many new dads" because dads fertilize the mothers' eggs, and it was "Sabastion's" eggs that were fertilized. That makes "Sabastion" the mommy, not the daddy.
And "most new dads" don't "give birth to their child." No dads do. Ever.
And "most new dads" don't breastfeed their babies. No dads do. Ever.
To say otherwise is to say that up is down. Or an elephant is a bird. Or the sun is under water.
To say otherwise is to attempt to alter reality.

Even Proponents Get Confused Trying to Make Sense of The Altered Reality
Already in 2000 (June 21-27), the Village Voice ran a story titled, "Two Dads with a Difference--Neither of Us Was Born Male." In the words of one of the "dads," Patrick Califia-Rice, "We are transgendered men (female-to-male, or FTM). My boyfriend is the mother of my child."
But that was the way-left, Village Voice. Not mainstream news. How many Americans were even aware of the story?
Five years later, in the 2005 book 50 Ways to Support Gay and Lesbian Equality, Noelle Howey wrote, "Fourteen years ago, my father became a woman. . . . For clarity, though, I still refer to her as my dad or my father when talking to other people; after all, that's who she is."
So, her father is a she. But of course!
The question, though, was how to refer to her father. Should she now call him "Mother"?
Howey explains, "Names, like pronouns, were initially a challenge for us. The conundrum might have been solved by defaulting her title to 'Mother,' as most kids of transsexuals are inclined to do. Call us old-fashioned, but my father and I had little intention of altering the name of our relationship, regardless of peer pressure. I already had a mother, who was more than a bit proprietary about the title. Also, I had a father. She might have changed her gender, but that didn't change who originally brought the sperm to the party."
So, this "woman" was her father after all, the one "who originally brought the sperm to the party."
In the end, she decided on "Da." "Ma" just wasn't going to work.
But for "Sabastion," she does not only want to be he. Mommy wants to be Daddy.
This is sad indeed.

Don't Normalize the Abnormal, Pray for Those Confused
But I don't write this to mock "Sabastion" or Nowelle Howey and her dad or others in similar situations. I have only sadness in my heart as I write.
At the same time, the more CNN and other news outlets try to normalize the abnormal -- no, try to make possible the impossible -- I will raise my voice in protest.
The CNN article states, matter of factly, "Sabastion, 24, is a transgender man who lives with his wife Angel in suburban Atlanta. Assigned the female gender at birth, he began transitioning five years ago. It's a process that felt more complete last month when he had surgery to remove his breasts."
I urge everyone reading these words: Don't get used to such language. Don't buy into the lie that you were "assigned a gender (= sex) at birth." Don't believe for a moment that biology is bigotry. Don't ever think that moms and dads are interchangeable, or that male and female are artificial categories. And don't believe that the most compassionate thing you can do is affirm "Sabastion" as a dad. Not a chance.
If "Sabastion" was not actually a woman she would not have wanted to conceive or birth or nurse her child. And it is hardly compassionate to say, "Yes! Cut off your breasts and take hormones for life and have radical sex-change surgery. And when you're done, you still won't be a biological male (or the baby's father)."
No, that is not compassion, despite the prevailing cultural tide. That is collaborating with social reengineering. That is marching further down the path of perception becoming reality. And that is the last thing we want to do on Father's Day.
Instead, today, let's lift up a prayer for God's best for "Sabastion" and her loved ones. And let's celebrate the millions of real fathers in our midst.
In the end, reality will prevail.
Originally published at Ask Dr Brown - reposted with permission.