One Trigger Event Away From Violence - Radical Left Plotting Next Step 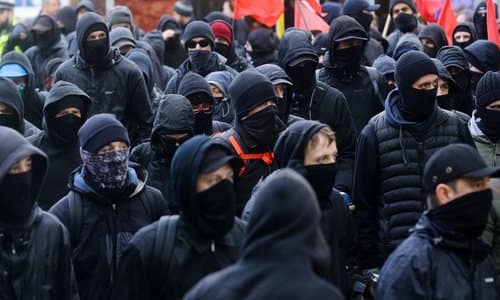 By Michael Snyder/End Of The American Dream June 28, 2018
Share this article:
You might want to start taking the radical left seriously.  When they tell us "you ain't seen nothin' yet" and that "this is just the beginning", they are making threats that they intend to back up.
There have been other times in modern American history when the left has resorted to physical intimidation and violence, but I believe that what is coming is going to far surpass anything that we have ever experienced before.

Of course not everyone agrees with me.  On Monday I authored a piece about the "civil war" that is rapidly approaching, and there were some that loudly criticized me for it.  They insisted that we didn't have anything to worry about from the left and that I was blowing things out of proportion.
As you read the rest of this article, I hope that everyone will start to see that I am not exaggerating the threat one bit.  And what we should all be able to agree on is that the radical left is super energized right now.
Just look at what happened on Tuesday.  28-year-old radical socialist Alexandria Ocasio-Cortez absolutely crushed 10-term congressman Joe Crowley in a Democratic primary in New York.  She was outspent 18 to 1, and in normal times something like that would never happen.
But these aren't normal times.
While many on the right are in a deep state of slumber, the radical left is seething with anger.  Many of them truly believe that Donald Trump is the closest thing to Hitler that America has ever seen, and they also believe that anyone that supports Donald Trump is essentially a modern-day Nazi.
And if you take that line of thinking to the rational conclusion, any form of resistance against Nazi tyranny is justified, including the use of violence.
For a few moments I would like to examine an article that a progressive writer named Hamilton Nolan authored for Splinter entitled "This Is Just The Beginning".  In his piece, he posed an ominous question to those of us that are conservatives...
Do you think that being asked to leave a restaurant, or having your meal interrupted, or being called by the public is bad? My fascism-enabling friends, this is only the beginning.
It doesn't take much reading between the lines to figure out what he means by that.

In fact, later on in the article he tells us exactly what he meant...
The U.S. had thousands of domestic bombings per year in the early 1970s. This is what happens when citizens decide en masse that their political system is corrupt, racist, and unresponsive. The people out of power have only just begun to flex their dissatisfaction. The day will come, sooner that you all think, when Trump administration officials will look back fondly on the time when all they had to worry about was getting hollered at at a Mexican restaurant.
For those of you that still don't get it, he is openly telling us that domestic terrorism is coming to U.S. cities.
There are many on the left that actually crave a violent revolution, and they look back on Bill Ayers and the Weather Underground as inspiration.  The following comes from Art Moore...
In the years 1971 and 1972 alone, according to the FBI, more than 2,000 bombs were planted throughout the United States by domestic terrorist groups. Among the chief culprits was the Weather Underground, led by Bill Ayers and Bernardine Dorn, who hosted a fundraiser at their home to launch Barack Obama's political career. Among the Weather Underground's targets were the Pentagon and the U.S. Capitol.
Hamilton Nolan is not just some crank.  He has actually written an article for the New York Times, and he is quite popular in leftist circles.
In his piece for Splinter he was quite careful not to call for bombings himself, but at the conclusion of his article he did state that it was time to "start fighting" Trump and to begin treating members of the Trump administration as "criminals"...
Stop working for this man. Stop enabling him. Stop assisting him. Start fighting him. The people who are responsible for what is happening are not going to get out of this with their happy wealthy respectable lives unscathed. This is a country that locks poor people in cages for decades for trying to make $20. This is a country that is "tough on crime." Remember? And the ones who make the laws are not going to like what happens when America starts to regard them as the criminals.
So far, Nolan's piece has been read more than 798,000 times.
And of course Nolan is far from alone.  This week radical leftists all over the country have been circulating a video on social media that seems to imply that Trump supporters should be gunned down at restaurants.
If this kind of hatred continues to be spewed relentlessly, it is only a matter of time before widespread violence breaks out.

Sadly, progressive leaders just continue to get more and more heated with their rhetoric.  For example, Michael Moore just compared Donald Trump to a rapist and his supporters to accomplices to rape...
Grabien News reported filmmaker and frequent MSNBC guest Michael Moore likened Trump voters to accomplices to rape.
"If you hold down the woman while the rapist is raping her, and you didn't rape her -- are you a rapist?"
Moore added: "Anybody who enables, anybody who votes for and supports a racist is a racist. You are culpable, white America, I'm sorry."
If you don't believe that chaos is coming to the streets of America, just go hang out in places where radical leftists talk with one another on the Internet.
They are quite clear on what is ahead if they can't take back control of America at the voting box, and it isn't pretty.
And to a certain extent it has already started.  In a recent article, Kevin McCullough summarized just a few of the things that we have seen happen in recent days...
Secretary Kirstjen Nielsen was literally shouted at until she left a dinner at an eatery near the White House. Press Secretary Sarah Sanders just Friday evening was told she would not be served (nor her family) at the Red Hen eatery of the Shenandoah Valley in Lexington, Virginia.
She was told she was refused service was because she works for the President. Secretary Nielsen has had additional groups camped outside her house playing loud speakers, disturbing the peace of she and her neighbors.
Entitled leftist celebrities like Robert De Niro bogart awards shows encouraging viewers to sexually violate the President. Washed up former TV stars like Tom Arnold claim they will harass the First Lady at her son's school. And true Hollywood losers like Peter Fonda claim that Sarah Sanders' as well as Melania Trump's children should literally be raped by pedophiles and sex traffickers.
Sadly, the list keeps growing.  On Monday, a group of angry leftists ambushed Senator Mitch McConnell's vehicle while he was leaving an event, and on Tuesday authorities in Los Angeles arrested 25 people that were protesting in anticipation of the arrival of Attorney General Jeff Sessions...
Arrests were made as hundreds of protesters gathered in downtown Los Angeles Tuesday ahead of a planned visit by Attorney General Jeff Sessions.
Twenty-five people were taken into custody after the peaceful organized protest was declared an unlawful assembly by Los Angeles police. Clergy were seen among those being arrested.
Crowds holding signs were given a five-minute warning to disperse by LAPD before the arrests took place, according to authorities.
All it is going to take is one large trigger event to set this country ablaze from coast to coast.
Anger and frustration are already at unprecedented levels, and this is happening even though the economy is performing relatively well.
Imagine if it wasn't.
The Republican Party has just released a new video entitled "Unhinged", and I recommend that you take a few moments to watch it.
If the radical left is this crazed now, what are they going to be like once things really start to go bad in this country?
For now, many on the right are ignoring this growing threat on the left, but I believe that is a huge mistake.
Chaos is coming to the streets of America, and it is going to be here a lot sooner than many conservatives would dare to imagine.