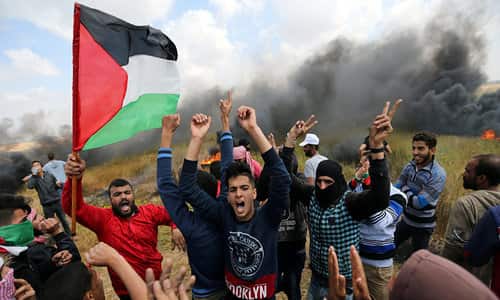 By Yoav Limor/JNS.org June 29, 2018
Share this article:
The rocket salvo fired at the Israeli communities on the Gaza Strip ‎border on Wednesday signaled another step on the way to a ‎confrontation in which neither Israel nor Hamas are interested.
The reason for the escalation is less important, as it follows the ‎steady security deterioration of the past few weeks: Hamas is ‎pushing the kite terrorism campaign, the Israel Defense Forces has had to intensify its ‎response, and Hamas has had to escalate its reprisals so as to maintain ‎its image as the defender of Gaza.

This is a dangerous dynamic that leaves too much to chance. ‎All it would take is an incendiary kite that burns down an Israeli ‎house or an Israeli strike that results in Palestinian casualties to ‎trigger a full-blown conflict. ‎
Israel is wary of this, but every day the IDF inches closer to the ‎point where it would no longer be able to control circumstances. ‎Firing warning shots at kite terrorist cells has grown into strikes on ‎Hamas vehicles transporting them, and while this is still far from ‎targeted assassinations, it is merely one step away.‎
Offensive tactics are only one side of the Israeli solution. It is also ‎pursuing a technological response, so far to only partial success, while ‎enhancing and improving firefighters and Homefront Command ‎teams’ response to the fires raging in the Gaza-vicinity communities as ‎a result of Palestinian arson terrorism.‎
The IDF Southern Command believes these joint efforts are ‎proving successful, as shown by the decrease in the number of daily ‎fires, especially large ones, indicating that Hamas is struggling to ‎keep incendiary kites effective. ‎

Still, it seems a little early to show optimism. The battle against kite ‎terrorism is far from over, and it may escalate into a full-fledged war ‎before a solution is devised.‎
But even if kite terrorism becomes a thing of the past, Hamas will ‎not relent. For the first time in months, its leadership has a feeling that its ‎struggle is bearing fruit: Egypt has opened the Rafah crossing after ‎four years, and the American envoys who visited Israel this week ‎focused on the crisis in Gaza, not the Palestinian Authority. ‎
A misinterpretation of the situation by Hamas could lead it to ‎conclude that it should intensify its border riot campaign to mark ‎more achievements. This will prompt Israeli countermeasures, ‎which could then lead to an inevitable escalation.‎
The way to change this process runs through the parallel, behind-the-scenes efforts trying to broker an understanding between Israel ‎and Hamas that could facilitate a long-term ceasefire.
Quite a few ‎individuals, both Western and Arab, are involved in these efforts, ‎which have yet to come to fruition. This is a race against time ‎between words and rockets, and sadly, the latter may have the ‎upper hand.‎
Originally published at JNS.org - reposted with permission.