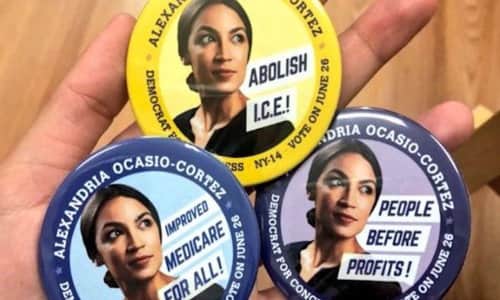 By Jonathan S. Tobin/JNS.org July 19, 2018
Share this article:
At only 28 years old and with nothing but an upset primary win in a New York City congressional district on her résumé, being anointed as the "future of the Democratic Party" was quite a burden to place on Alexandria Ocasio-Cortez.
Since beating Rep. Joe Crowley--a veteran incumbent, as well as the boss of New York's Queens County's Democratic Party--on June 26, Ocasio-Cortez has become something of a political rock star, according to Democratic National Chairman Tom Perez, who gave her that title.

Perez might be right about Ocasio-Cortez and his party. But if so, there are two things about her that are actually of greater interest than the fact that she is a charismatic figure who embodies the Democrats' hopes of generating a massive turnout of young voters this fall for the midterm elections.
One is that she ran as a "Democratic Socialist," rather than a garden-variety Democrat. The other is that she's already on record libeling the State of Israel and has struggled to back up or even give a coherent explanation for those views.
Vermont Sen. Bernie Sanders proved during the course of his surprisingly effective 2016 presidential campaign that "socialist" was no longer a dirty word for American liberals. For those who have grown up in the three decades since the fall of the Berlin Wall, the reality of what that term has actually meant during the 20th century is as remote to them as the collapse of the Roman Empire.
For many young voters, socialism is a catchall phrase embodying their resentment of a rapidly changing global economy, and a claim of wanting to make the world a better, fairer and more equitable place.
In a Democratic Party drifting to the left with figures like Sanders and now Ocasio-Cortez appealing to the sentiments of its liberal base, the stigma that had rightly attached itself to socialism has faded.
Socialism has always been in fashion in certain pockets of academia, but it was widely accepted in the early 20th century as societies struggled to adjust to a modern industrial economy. Given the oppression they faced in Europe, Jews were vulnerable to the notion of creating a new world in which equality would reign and discrimination would be eliminated.

Some forms of socialism--such as Labor Zionism and even the Bundists, who hoped to find freedom for Jews in a Europe ruled by socialism--were relatively benign. But the strain of socialists who gained power in much of the world soon illustrated not only the basic fallacy of their economic theories (something that was also true in Israel, as its current prosperity wasn't possible until it discarded the socialism of its founders), but also what happens when power is concentrated in the hands of a small group that thinks it knows how everyone else should live.
The great lessons of the 20th century were that when regimes ruled by this ideology are created to suppress individual rights and the free market, the result is inherently dictatorial and violent in nature. Economic ruin also soon follows. It's not just that, for all of its problems, capitalism is the only sure path to prosperity and freedom.
During the course of the last century, the cumulative death toll from Communist regimes, which always described themselves not inaccurately as "socialist," amounts to approximately 100 million slaughtered in famines, purges and gulags. Blood always flows when individual freedom is sacrificed on the altar of utopian ideology.
That socialism would now be making a comeback shows how fleeting is historical memory. But the problem with this sort of utopian thinking is that it involves more than just discredited economic theories. Today's socialists are also influenced by intersectional theory that identifies all causes associated with minorities or Third World peoples as part of a general struggle against capitalism.

Both Sanders and Ocasio-Cortez accused Israel of atrocities, embracing lies spread by apologists for Hamas terrorists during the weekly "return marches" that started this spring, when Israel's border with Gaza was assaulted by Palestinian rioters armed with rocks, Molotov cocktails, explosives and incendiary devices.
In a PBS "Firing Line" interview conducted after her victory, Ocasio-Cortez was asked to account for her previous claims that Israel had conducted a "massacre." Her response was contradictory and incoherent. Though at one point she said she supported Israel's right to exist and a two-state solution, she also said she opposed the "occupation of Palestine." When challenged by interviewer Margaret Hoover to explain what she meant by that, Ocasio-Cortez was flustered and begged off, saying she wasn't an "expert on geopolitics."
That says a lot about the way even young politicians mouth slogans without knowing much about their meaning. Since that interview, Ocasio-Cortez has flip-flopped on the issue more than once as she reacted to criticism from fellow leftists, who fear she is backing off from her opposition to the Jewish state.
Unfortunately, the people whose efforts she and Sanders were supporting by unfairly criticizing Israel do know what they mean by "occupation." For those who took part in those marches, "return" means turning back the clock to 1948 and erasing the State of Israel, all of which they deem "occupied" territory. Yet that doesn't stop contemporary "socialists" from seeking to undermine Israel's right to defend itself.
Ocasio-Cortez won't be the only member of Congress who thinks their ignorance is no reason to avoid spouting off about serious issues, even when it means libeling Israel. Yet the real problem here is the consequences of the utopian impulse at the heart of her ideas.
The romance of socialism is irresistible to those who believe that their outrage and good intentions are a reasonable substitute for sound economics or an understanding of conflicts in which the murderous hate of anti-Zionism is disguised as the struggle against imperialism. But it's a temptation that anyone with an understanding of history should avoid.
If she and those who follow in her footsteps are the future of the Democratic Party, that bodes ill for both the United States, Israel, and most certainly, for the Democrats.
Originally published at JNS.org - reposted with permission.