What Will Happen After The Palestinians Reject Trump's Peace Plan? 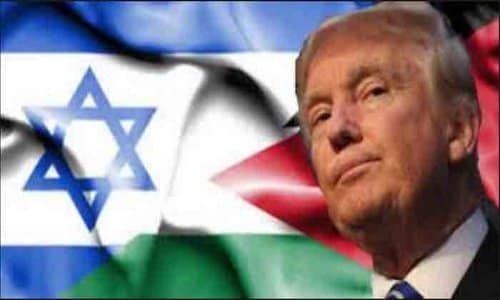 By Ariel Ben Solomon/JNS.org August 23, 2018
Share this article:
Amid speculation that U.S. President Donald Trump could soon release his Middle East peace plan, the word in political, academic and Jewish organizational circles is that it's almost certain to not go anywhere and surely be rejected by the Palestinian leadership.
The reasons for the expected Palestinian uncompromising opposition to any deal with Israel have been repeated ad infinitum elsewhere, but suffice it to say that religiously, culturally and politically, Palestinians are in no way ready to accept a deal.

Palestinian Authority leader Mahmoud Abbas does not want to go down in history as a traitor to his people and be the one to give legitimacy to Israel.
So the question remains: What will happen after the Palestinians reject Trump's plan ?
Could it be that Trump expects a Palestinian rejection and then move to bypass them by giving Israel a free hand? At the same time, it seems unlikely that Arab states such as Saudi Arabia, Jordan and Egypt would go along with a plan deemed by many to favor Israel.
Trump was reportedly planning to unveil his "deal of the century" during his Sept. 25 address to the U.N. General Assembly, but National Security Advisor John Bolton pushed back, saying "there is no decision on a timetable for when the full details of the plan will be announced," according to the Associated Press.
However, Trump is expanding his peace-plan staff in anticipation for the rollout, CBS News reported on Wednesday.
At a rally in West Virginia on Tuesday, Trump said Jerusalem is off the table after having relocated the U.S. embassy there, but signaled that Israel would have to pay a price for the move in return.
'Not a central regional concern'
Asaf Romirowsky, executive director of the nonprofit Scholars for Peace in the Middle East and co-author of Religion, Politics, and the Origins of Palestine Refugee Relief, tells JNS that every administration feels that it must attempt to solve the Israeli-Palestinian conflict.

"When the Palestinians reject the plan, Trump can then say he tried. The Palestinians have already created the narrative that Trump is not an honest broker," says Romirowsky, who is also a fellow at the Middle East Forum think tank.
Romirowsky sees the violence launched from Gaza against Israel as interwoven with the peace process talk by the U.S. administration and is meant to create a media image of Israel as the aggressor--bombing with fighter jets--with the Palestinians using mostly kites and balloons, however destructive they have turned out to be.
"The interesting thing is there are good ties between Israel, Egypt, Saudi Arabia and other Sunni states," he says, "and this highlights the fact that the Palestinian issue is not the central regional concern. Iran is."
Asked about what the fallout could be if the Palestinians reject the expected U.S. peace plan, Romirowsky responded that more violence against Israel from Gaza and even from the Hezbollah terrorist group in the north could be expected. He predicts a possible outbreak of full-fledged war between Israel and Hamas in Gaza in the next few months.
A war with Israel would change the media narrative by seeking to show the Arabs as victims and Israel as the aggressor, he adds.
The same is true regarding the multiple rejections by the Palestinians for a state, continues Romirowsky, pointing out that "the Palestinians have shown again and again that they don't want a deal, and prefer to play the role of victim."

Palestinians and Arabs consider American offer biased
Ronen Yitzhak, head of the Middle East Studies department at Israel's Western Galilee College, tells JNS that Trump's plan includes items the Palestinians would never agree to. In addition, he speculates that if no major Arab states--Saudi Arabia or Jordan, in particular--support the plan, the world will side with the Palestinians.
"The Trump plan was meant to go around the Palestinians, and get the agreement of the Saudis and Jordanians, but now they don't agree either," says Yitzhak.
He adds that the delaying in the release of Trump's plan could very well be because of the failure to gain Arab support.
Ido Zelkovitz, head of the Middle East Studies program at Yezreel Valley College and a policy fellow at Mitvim think tank, comments that the Trump peace plan has no way of being accepted within the Palestinian political sphere.
"Mahmoud Abbas considers the American offer as biased, and internal political issues are more important to both the Fatah and Hamas leadership than a regional peace process," states Zelkovitz, who is also a senior research fellow at the Ezri Center for Iran & Persian Gulf Studies at the University of Haifa.
Noting that the environment is not ripe for a deal right now, Zelkovitz says that "the Trump plan or any other plan doesn't have any chance to create an impact on the ground."
Originally published at JNS.org - reposted with permission.