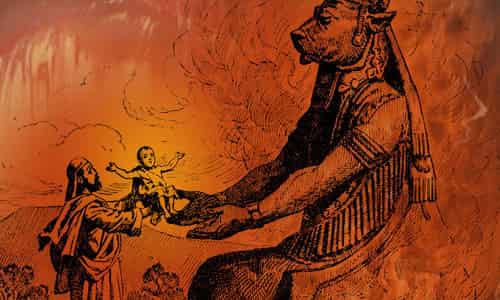 By Michael Snyder - End Of The American Dream Blog April 12, 2016
Share this article:
The Temple of Baal is NOT coming to Times Square in New York City next month.  This is great news, and it represents an incredible victory for Christians in the United States.

As you will see below, the New York Times, Snopes and a whole host of other mainstream news sources reported last month that everything was on track for reproductions of the giant 48-foot-tall arch that stood in front of the Temple of Baal in Palmyra, Syria to be put up simultaneously in Times Square in New York City and Trafalgar Square in London during the month of April.
But now that will not be happening.  The only arch that will be going up will be in Trafalgar Square, and it wont be the one from the Temple of Baal.  Instead, the Institute for Digital Archaeology has changed plans and will be putting up a reproduction of the Arch of Triumph which the Romans originally built in Palmyra and that has nothing to do with Baal.
So why has there been such a dramatic change in plans?
On Friday, I received an urgent message from a contact that has been investigating this, and she told me that she had talked directly to someone from the Institute for Digital Archaeology and that she had been informed that no arch was going up in New York during the month of April.
I pressed her for confirmation, because every mainstream source that I could find said that the arch from the Temple of Baal was indeed going up next month.  So her information would definitely change everything, but I needed to be able to confirm this.
Well, confirmation came in the form of an article from the Telegraph, which is one of the most important news sources in the United Kingdom.  On Friday, they reported that the original plan to put up the arch from the Temple of Baal in New York and London simultaneously had been scrapped...
When the IDA revealed last December that it was intending to use its data and expertise to build not one but two replica Palmyra arches  to be unveiled simultaneously in Trafalgar Square in London and Times Square in New York  it generated headlines across the world.
Since then there has been some backtracking on the original idea. There will be no simultaneous unveiling in New York  they may transport the London arch there later, or build another one  and the Palmyra arch that is being reconstructed is no longer the entrance to the Temple of Bel (which survived an attempt to blow it up in August 2015) but the Arch of Triumph (partially destroyed in October) formerly located at one end of the Great Colonnade.
As you can see, this report confirms what they were originally planning to do, and this represents a massive change of direction.
Just a few weeks ago, everything appeared to be all set for this arch from the Temple of Baal to go up in Times Square in April.  For example, the following is what the New York Times reported on March 19th&
NEXT month, the Temple of Baal will come to Times Square. Reproductions of the 50-foot arch that formed the temples entrance are to be installed in New York and in London, a tribute to the 2,000-year-old structure that the Islamic State destroyed last year in the Syrian town of Palmyra.
The groups rampage through Palmyra, a city that reached its peak in the second and third century A.D., enraged the world, spurring scholars and conservationists into action.
Of course the New York Times was far from alone in reporting about this.  The New York Post had also reported that this was a done deal...
A towering arch of an ancient temple in Palmyra, Syria, that has been mostly destroyed by ISIS terrorists will be recreated by a huge 3-D printer and put on display in New York City this spring, officials said on Monday.
The life-size model of the original 2,000-year-old structure, known as the Arch of the Temple of Bel, will stand approximately 48 feet high and 23 feet wide.
And as I write this article, Snopes is still reporting that the arch from the Temple of Baal is going to go up in New York and London&
While it is true replicas of Palmyras Temple of Baal arch are being constructed for temporary display in New York and London, the project solely involves reproducing the structures arch and not creating a functional building. Moreover, interest in reproducing the demolished antiquity is archeological in nature, not religious.
The big question is this...
Why has there been such a sudden change in plans?

First of all, why is no arch going up in New York next month at all?
Secondly, why has the arch in London been switched to an entirely different arch?
Could it be possible that the alternative media has played a role?  Since the original New York Times story last month, a massive firestorm has erupted in the alternative media and this story has gone megaviral all over the Internet.
Could it be possible that they have backtracked because of how much negative attention this story has been receiving?
Of course let us not underestimate the prayers of Gods people.  Once this story went viral, Christians all over America started praying against this arch.  From personal experience, I know that the prayers of righteous men and women are extremely powerful, and we may never know how much of an impact they had on this situation.
So let us celebrate this victory, but let us also understand that what this country is facing is not going to fundamentally change unless there is true repentance.  Because even though a monument to Baal is not going up in New York City next month, we continue to embrace the ways of Baal as a nation.
Since Roe v. Wade was decided in 1973, more than 58 million babies have been murdered in America, and of course this was a key feature of Baal worship in the ancient Middle East.  One place where we find this in the Bible is in Jeremiah 10:4-6...
4 Because they have forsaken me, and have estranged this place, and have burned incense in it unto other gods, whom neither they nor their fathers have known, nor the kings of Judah, and have filled this place with the blood of innocents;
5 They have built also the high places of Baal, to burn their sons with fire for burnt offerings unto Baal, which I commanded not, nor spake it, neither came it into my mind:
6 Therefore, behold, the days come, saith the Lord, that this place shall no more be called Tophet, nor The valley of the son of Hinnom, but The valley of slaughter.
Another key feature of Baal worship that we see reflected in modern society that I discussed in a previous article is the public exhibition of sexual acts.  In ancient times, there would be crazed bisexual orgies around the altars of Baal, and large crowds would gather around to watch.
And of course today we are a nation that is absolutely addicted to watching other people have sex.  In fact, it has been estimated that 68 percent of all Christian men watch pornography on a regular basis.
Unless we change our ways, it is inevitable that the judgement of God is going to hit America extremely hard.  This is one of the topics that I cover in my new book entitled The Rapture Verdict.  God keep calling us to repent, but we keep shaking our fists at Him as a nation.
At some point, time will run out.
For the moment, let us celebrate this victory over the Temple of Baal.
But let us not relax one bit, because there is an enormous amount of work that needs to be done to try to wake this country up while we still can.