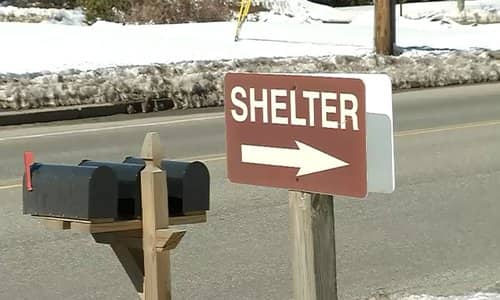 By PNW Staff August 28, 2018
Share this article:
It seems to be common sense that shelters for women who are victims of sexual abuse, violence or sex trafficking should be able to block men from sleeping on the premises, but tell that to government officials in Ontario, Canada and Anchorage, Alaska.
In both cases, the politics of transgenderism and political correctness were taken so far as to put vulnerable female victims at risk, and in both cases the women or those protecting them are now being accused of gender discrimination.

Kristi Hanna, a 37 year old female and victim of sexual abuse struggling with addiction, sought refuge at Palmerston House for women. She was forced to share a room with an individual in their late 20s with facial and chest hair that wore combat boots and acted, according to her description, both aggressively masculine and sexually threatening.
The biologically male individual talked lewdly about women and sexual preferences and the loud stomping at night of combat boots, Ms. Hanna complains, contributed to her anxiety until she left to sleep on the couches of friends. So how did this individual who, by all practical description is a man, not only gain access to a women's shelter by convince the staff that an abused woman should be forced to sleep alone in the same room with him?
Simple, the preoperative, male-to-female person claimed to 'identify' as a woman; thus, he is now a 'she'.
Ms. Hanna complained that the Palmerston House had "admitted a male- bodied transgender into the safety of [her] home, bedroom and safe spaces," and now the Ontario Human Rights Legal Support Center is accusing her, Kristi Hanna, of illegal gender discrimination for referring to the individual as a man in her complaint.
The staff reportedly told her to "deal with it or leave" and when asked about their policies regarding separating women from transgendered persons, they replied in a written statement to the National Post, "with respect to accommodating trans women, we do not discriminate; nor do we impose modifications with respect to accommodation." Thus by refusing to impose reasonable discrimination that would separate abuse victims at a shelter from masculine, biological males, they expose to danger the very women they are meant to protect.

In a similar fashion, the Downtown Hope Center for sexually abused and trafficked women in Anchorage, Alaska is now under fire for not allowing a transgender person (biologically male) to sleep there. The shelter is now the target of an investigation by the state's equal rights commission because Timothy Coyle knocked on the door drunk one night, injured from a fight at a homeless shelter.
Timothy was going by the name Samantha and demanded to be let in. Seeing he was injured, the Director Sherrie Laurie refused him entrance but called him a cab and kindly paid his fare to be taken to the emergency room where he/she was treated.
Downtown Hope Center has defended itself on religious grounds, arguing that since it is not a public entity it does not have the obligation to provide equal accommodation to all genders. But truly, should that even be of primary consideration?
The complaint that the center has fired back at the commission in its own defense argues that enforcement of such ill-conceived "anti-discrimination" would "force women to sleep alongside and interact with men in intimate settings, even though those women may have just been beaten, raped and sexually assaulted by a man the day before."
The legal hammer that the state is using to bludgeon the women's shelter into accepting men into its common sleeping quarters is an anti-discrimination statute that makes it a crime to "refuse, withhold from or deny to a person any of its accommodations, advantages, facilities, benefits, privileges, services or goods of that place on account of [a variety of factors including] gender identity."
Public accommodation is not by definition governmental, but instead "any business or professional activity that is open to, accepts or solicits the patronage of, or caters or offers goods or services to the general public." But when the service is protection, offering entrance to any and all who come negates that very same service.

Downtown Hope Center turned Coyle away on several other occasions outside of normal hours, but to be clear, has allowed him to eat hot meals there and receive other services without incident. They simply refuse to allow him to sleep alongside women, and for that they are facing state investigation for gender discrimination.
In a cruel Catch-22, if the shelters allow certain individuals into their protected spaces they risk violating the safety of the women they seek to protect, and possibly risk liability for any harm that may come to those women.
On the other hand, if they turn them away, they put themselves at risk of prosecution by overzealous trans-activists who seek to sue them or shut them down completely. Thus, politically charged accusations of trans-gender discrimination are effectively used to prevent at-risk women from staying safe from actual gender discrimination that is putting their lives in danger.