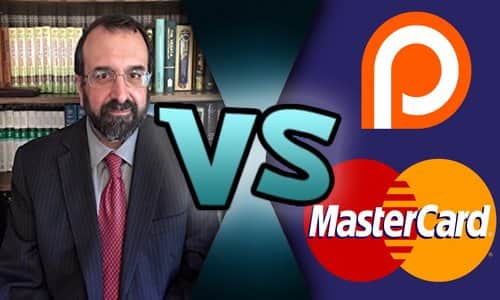 By PNW Staff August 28, 2018
Share this article:
Jihad Watch is the latest target of a widening crackdown on right of center, conservative and Christian media voices. Figures such as Alex Jones and Gavin McInnes have been booted from YouTube, Twitter and Facebook recently, and now the left has gone after payment systems to strip away the ability for supporters to fund right-leaning websites.
Robert Spencer has built the Jihad Watch website into one of the world's foremost sources of reporting on Islamic ideology and extremism, all in his quest to expose the threat of Islam as a violent and political movement fundamentally opposed to Western culture and modernity.

For years the site has featured reporting, photography and video footage from across the globe and it is widely regarded as the best site for tracking jihadist activity across the web as well.
Jihad Watch is primarily supported by The Horowitz Freedom Center and several other organizations and large donors such as the Bradley Foundation. Recently however, Spencer created a Patreon and a GoFundMe page to allow his millions of fans to pledge their support if they saw value in the work he does.
On August 14th, he received a message from Patreon informing him that they would be removing his account. With a tone of the utmost congeniality, the email reads, "My name is April and I'm on the Trust and Safety team here at Patreon. I've been notified by Mastercard that we must remove your account from Patreon, effective immediately. Mastercard has a stricter set of rules and regulations than Patreon, and they reserve the right to not offer their services to accounts of their choosing.
This is in line with their terms of service, which means it's something we have to comply with." And with that his account closed and the money donated by fans refunded to them.
GoFundMe refunded donations quietly, removed another portion of the money received, and then went silent, avoiding an outright ban but disrupting Jihad Watch's ability to receive money from its supporters.
Patreon was started as a way for fans to support content creators, artists and intellectuals without relying on advertising media. Content creators on YouTube, for instance, are at the mercy of advertisers who can choose to demonetize a video that they dislike, as well as YouTube that can arbitrarily block or ban accounts that don't align with their views.

With Patreon, the fans themselves lend their support without the trouble of watching ads, but payment processors such as Mastercard and Visa are still able to exert their influence.
In this case, it was Mastercard that used its partnership with Patreon to force Patreon's hand, and they could do the same to any artist, journalist, poet or writer on the site they don't agree with. There is no appeals process, no three strikes rule and no real recourse for Spencer and Jihad Watch because Patreon risks the threat of Mastercard blocking their entire business.
Is it coincidence that the Southern Poverty Law Center (SPLC) only recently labeled Jihad Watch as an anti-Muslim organization that is both extremist and dangerous in its Islamophobic views?
The SPLC maintains a list of the left's political enemies, all of which it brands as extremist, hate mongering, racist, supremacist or something-phobic in an effort to discredit them. And this tactic works. Mainstream media, already left-leaning, picks up the new label without question and runs with it. It would seem in this case that Mastercard used the label of extremist and Islamophobic to justify their suppression of Jihad Watch.
Spencer said of the banning, "In the United States, of course, we have demonitization and deplatforming. People who are telling unwelcome truths are simply silenced, and they're throwing us off social media. Of course it didn't start with me and it won't end with me. This is the thing. People say, 'Oh I don't like Alex Jones,' and they shut him up. That doesn't matter. I don't like Gavin McInnes. I don't like Robert Spencer,' but they're going to keep coming until every voice that dissents from their agenda is silenced."
Censorship is not the federal or state government directly banning a viewpoint or jailing dissenting bloggers, as we might see in China. Instead, it is the collusion of media corporations, technology firms and front organizations such as the SPLC that all work together to silence right wing voices.

Blocked from mainstream media, deprived of funding on the web and banned from most major social media platforms, voices that dissent from the leftist agenda lose their ability to reach audiences. Just as banks have withdrawn their support of firearms manufacturers, Mastercard and other payment processors are pulling the plug on right-leaning sites by cutting them off from financing.
Jihad Watch will survive despite the actions of Mastercard. With any luck, the publicity that the controversy brings will only increase the site's traffic, but this is just one example of a much larger trend, a trend in which the overwhelmingly leftist media, finance and technology companies use their positions of power to silence and defame viewpointswith which they disagree.
**Editors Note ** - After the writing of this story it is also being reported that The David Horowitz Freedom Center stated in a recent email that its ability to accept donations by credit card has been disabled by both Visa and Mastercard following a campaign by the SPLC to label the Freedom Center as a hate group.
In the email to supporters, the Freedom Center lashed out at the move by Mastercard and Visa, saying: "this blow could be the end of the Freedom Center. Decades of work, down the drain because the hateful Left wants to squash free speech and silence an organization that dares to question them.
Who will be next?