Sin or Sickness?: We Need Deliverance, Not Just Diagnosis 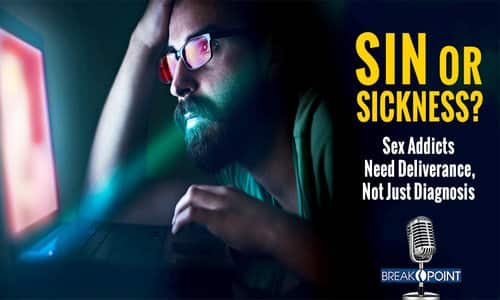 By John Stonestreet/Breakpoint.org September 10, 2018
Share this article:
The increasing tendency to reclassify moral failures as "mental disorders" is troubling. Here's why Christians must resist the pressure to diminish moral guilt.
When students confess pornography addiction to me, I point them to the necessity of accountability, the importance of counseling, and other strategies that can help them overcome this bondage.
But I also encourage them to repent, to confess their deeper bondage to sin--a bondage that started with a moral failure, the choice to click and to click again, and to click again.
Their hope, I want them to know, is ultimately found in the grace of God, as proven in Christ Jesus, that God will forgive our sin and deliver us from it.
Few people today still think like this. There's a growing trend to describe sex addiction not as a sin, but as a sickness, like chicken pox or cancer or depression. And that trend has just become more official.
Recently, the USA Today reported that the World Health Organization has added "sex addiction" to its list of mental disorders. Many experts hope the new classification "will help change the disorder's perception from a moral failing to simply a medical issue."
One addiction specialist even praised the World Health Organization for removing sex addiction from the realm of "morality" and "religion," and placing it in the realm of medicine.
The shift, according to the article, "resembles previous changes to how doctors viewed other addictive disorders, such as alcoholism, drug addiction or gambling." Which makes me wonder, are these things now outside the realm of morality and religion, too?

Even more interesting is the list of criteria the World Health Organization used to diagnose this new class of disorder. Clinical sex addicts must exhibit repetitive sexual activities that become the focus of their lives. They must also have made repeated and unsuccessful efforts to stop the behavior, while deriving little satisfaction from it.
But of course anyone addicted to pornography would say at least two of these things. Compulsive behavior, trouble getting free of the habit, lack of lasting satisfaction--those are not only signs of addiction, they're signs of chronic sin. None of these things prove that what we're dealing with is merely a sickness.
But calling it a sickness removes moral responsibility. Have you noticed how many public figures, when caught in sexual misconduct, quickly and predictably blame addiction or mental illness for their behavior? Most recently it was Mel B (aka "Scary Spice" of the Spice Girls) who, when exposed, checked into rehab, talked of her actions as not a moral failure, but a disease.
Now don't misunderstand me. In the process of rehabilitation from an addiction, medical and therapeutic interventions are often necessary and clearly helpful. Ample research shows that as a person engages in a particular behavior over and over again, neurological pathways are reinforced, making it even more difficult to change the behavior.

The Bible reflects this reality, as well. The Apostle Paul described those in sin as being "slaves."
Our sin certainly can become an addiction, but that doesn't mean it no longer is a moral issue. Nor does it change the fact that, almost always, addiction begins with a moral choice.
That's why sin will never be an outdated concept. It's a deadly reality of fallen human existence, and to ignore it is to deny reality. We are moral agents in need of redemption and restoration, not just machines in need of a tune-up. Or as one of our writers, Leah Hickman, put it, the moral teaching of the Bible is not "all are sick," but "all have sinned."
The push to reclassify sexual addiction like pornography as a disease is what happens when we reduce all problems to physical causes. Materialist medicine alone, however, is incapable of breaking the power of sin over our lives. Only the Great Physician offers a lasting cure.
A Biblical resource that has helped thousands to break free of porn addiction is the Conquer Series which can be found here.
Originally published at Breakpoint.org - reposted with permission.